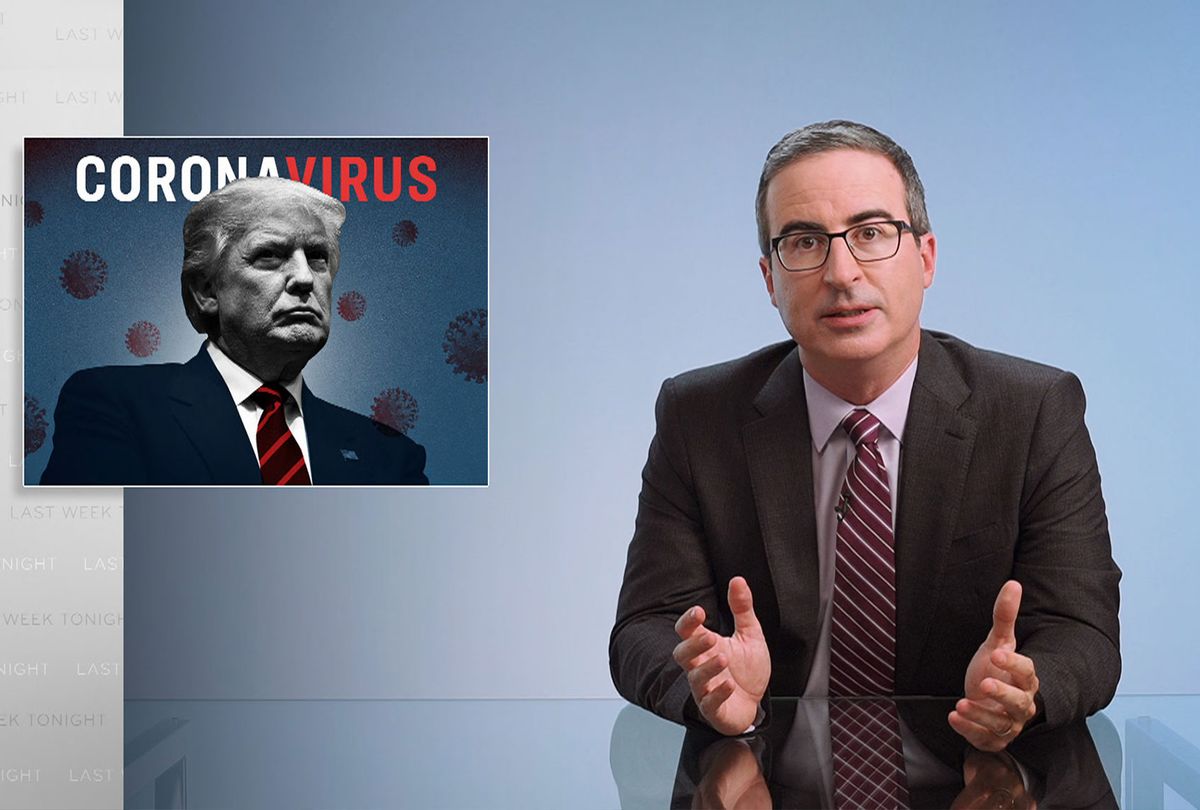 Underneath this avalanche of the unthinkable under which we're buried – the obscene count of preventable deaths, the laments over time's meaninglessness, the emergence of end-of-days creatures, all this and much more – lurks a simple truth that surely must be universally acknowledged: 2020 is a sadist.

What's strange and wonderful is that "Last Week Tonight" host John Oliver chose to help us laugh about that by fantasizing about that force as a live human mascot played by Adam Driver.

To be clear, never has Oliver implied that Driver is evil, or thoughtless or uncaring. But for reasons that may only be slightly more apparent now, Oliver ushers his bizarre, violently sexualized fantasy statements about what the "Marriage Story" star could do to him into a recurring bit apropos of nothing.

"Last Week Tonight" has a tradition of ending its seasons with a massive stunt its viewers anticipate with the same glee as other holiday traditions. Some people look forward to annual broadcasts of "Frosty the Snowman" or "Rudolph the Red-Nosed Reindeer." Oliver's devotees hang in there to see whether he'll send off the year that was with a smile or a massive F. U.

In 2016 producers compiled a montage of statements from people on the streets of New York listing all the ways that year sucked. Oliver referenced Trump's election as a dispiriting capper while also adding, "We cannot lose sight of all the other multiple ways this has been a s****y year."

Looking back on those complaints now, most people would give anything to be subjected to the irritations those 365 days served up, save for 2016's celebrity losses. That was the year we lost Prince, David Bowie, Phife Dawg from A Tribe Called Quest and Alan Rickman, for starters.

However, what we remember most fondly is how he wrapped up that litany of woe: by gleefully blowing up a gigantic "2016" in the middle of an empty stadium.

As we approach the end of 2020 we have very little of such fire left in us. Replacing it instead is an urge to feel – more, or better, or anything at all. Maybe that's why Oliver's Driver obsession somehow makes sense. Bewildering, unexplainable and a tad frightening, it is the murder hornets of late-night bits.

At various points during Season 7 of "Last Week Tonight," Oliver saucily invites Driver to "Shatter my knees, you f***able redwood"; or "jam your mandible claw down my throat, you irredeemable steer" or other lines even E.L. James would characterize as "a bit much."

This walked up to Sunday's season closer that we should have seen coming: Driver, at last, confronting Oliver via FaceTime with a rage that was decidedly non-erotic. Instead he is frustrated and confused, particularly after Oliver's request that Driver "crush his larynx" while lending him the pet name of "you unwieldy boulder."

"I was having some weird fun," Oliver explains to the actor, who he yells at the host for creating a situation in which the Internet stans the pair of men and declares, "That you thirsting over me is 'a mood.'"

Across the board, late night comedy has provided us with clarity, catharsis and bracing honesty wrapped in laughter in a time of extreme separation on many fronts – physical, emotional, certainly political. Quarantine and divisiveness have worn on us in large ways and small, and while several hosts are getting us through this nightmare with gentle, soothing jokes and counseling tenderness with ourselves and each other, others have seized upon the surreal nature of our collective lot to create some next-level screwiness.

Then there's John Oliver and his void.

Oliver long ago proved that he doesn't need an audience to pump up his jokes. But like everyone else, being in other people's presence lights him up in ways that the void simply cannot.

Don't get me wrong – "Last Week Tonight" has been as searing, effective and necessary as ever, but recent episodes also reveal its host's humanity and the impact of surge depletion. You can see it in the shift in energy between early in the season and later half-hours either by watching a few of them, or simply scanning the tiles on the HBO Max episode page and noticing the weight in his facial expression as our collective mood transformed from early 2020 bemusement to late-year exhaustion.

Oliver has never shied away from expressing his anger at the outrageous malfeasance and greed he reports in the top stories on his program, but the closer we drew to the election, the more amplified his urgency for sanity to reign again became. If he looks drained, who can blame him? We're all running on fumes.

Surely the void contributes to this. While every broadcast late night series has returned to their studios with limited audiences or none at all, and Trevor Noah and Samantha Bee continue to produce their shows from their homes, Oliver's programs purposefully came to us from some space resembling stasis or an in-between plane between life and death.

By electing to broadcast the majority of the seventh season from this entirely white space, Oliver reflected a metaphor of our shared condition back to us along with a share of the host's psyche. All told, it validated our impression of the extreme abnormality of daily and weekly life.

Oliver devoted more than a third of the season to the current administration's failure to curb the coronavirus on top of election coverage and close looks at other injustices afoot in the world while we're all in quarantine. He also found time to get Danbury, Conn., to name a sewage plant after him, devote a worshipful segment to Wendy Williams' loopy approach to broadcasting her daytime series from home and become an art patron, purchasing paintings of rat erotica, ties and a portrait of Williams devouring a lamb chop. This is all usual "Last Week Tonight" fodder.

But the Driver fiending is something else.

Oliver's first sexy Driver reference occurred during a February segment exploring the dangerous nationalism of Indian Prime Minister Narendra Modi, in which he used Driver's walking out on an NPR "Fresh Air" conversation with Terry Gross as a point of contrast with Modi storming out an interview. The contexts are very different. Modi stormed off because a journalist asked him whether he felt a sense of accountability for riots that occurred in 2002 under his watch as chief minister, in which more than 1,000 people lost their lives. Driver was angry at Gross because she played an audio clip of him performing on Broadway despite knowing that Driver does not like hearing or seeing himself perform.

But Oliver was not likening Driver to Modi. He affirmed the actor's exit simply because, in his estimation, Driver can do "whatever the f*** he wants." And here is where the dirty talk began. "Step on my throat, Adam Driver, you rudely large man. Break my fingers, you brooding mountain."

Oliver initially busted this out in front of a studio audience, one of only four such telecasts that "Last Week Tonight" was able to host in its 30-episode seventh season that ended on Sunday. But for . . . reasons . . . Oliver kept finding ways to come back to his fictional obsession with having Driver "demolish him" (his words, not mine).

"And what of Adam Driver himself? Is he bothered by this continued sexualization?" Oliver asked midway through the season. "He seems like a fairly private guy who's generally uncomfortable with attention, making what I'm doing possibly some form of harassment! He might actually have pretty good grounds to have my reprimanded legally to which I say, 'DO IT. Slap a restraining order on me, you forlorn block. Beg me to stop, you menacing obstacle.'"

In the season finale, Driver did not beg. He ordered Oliver to stop . . . and Oliver, playing the shocked and mildly titillated submissive, complied. It was the culmination of a season-long gag that good-naturedly reminds us of how strange we've gotten in the absence of normality or public places to visit, see others and be seen, save via Zoom.

It also bookends Oliver's 2016 season ender, down to the explosion – this one taking place in what appeared to be some sort of quarry.

"This year has been an absolute parade of misery," Oliver says before listing everything that occurred before the pandemic, including the Australian wildfires and Kobe Bryant's death. Now we're living with mass unemployment and evictions on top of mourning the losses of Chadwick Boseman, civil rights pioneer John Lewis and Supreme Court Justice Ruth Bader Ginsburg.

"This year ruined lives, jobs, concerts, and sanity. It also brought on a new wave of wrenching videos of police brutality that brought on a national reckoning with race, and a ferocious and depressing backlash. And sure, the presidential election ended well, but it was grim to live through," he said.

Taking all that into account, perhaps we can understand why Oliver, a host who describes himself as "six feet of nasty, spankable bird meat crammed into a suit," took a bit in which he daydreamed about a famous stranger slapping him around and ran with it for 10 months. At first it was absurd and seemed to come out of nowhere. Soon enough we came to wait for it, wondering what that was all about. Maybe that mood prevented us from completely retreating into our own numb nothingness. More realistically, it was just the sort of strange that felt right for right now.

As he does every year, Oliver ended his season with a warning for the future, laced in faint hope. "I really hope next year is going to be better. But the truth is, what happens is up to all of us. It's going to depend on how willing we are to fight, how well we learned from what's happened, and how much we're able to care about each other. So I don't know what happens next. But I do know what happens now."

At this point he takes a pen-sized detonator and fulfills an explosive fantasy on behalf of millions of us by demolishing something as opposed to getting demolished. "F*** you 2020," Oliver commands, adding for emphasis, "Get f***ed."

All episodes of Season 7 of "Last Week Tonight" are currently streaming on HBO Max.