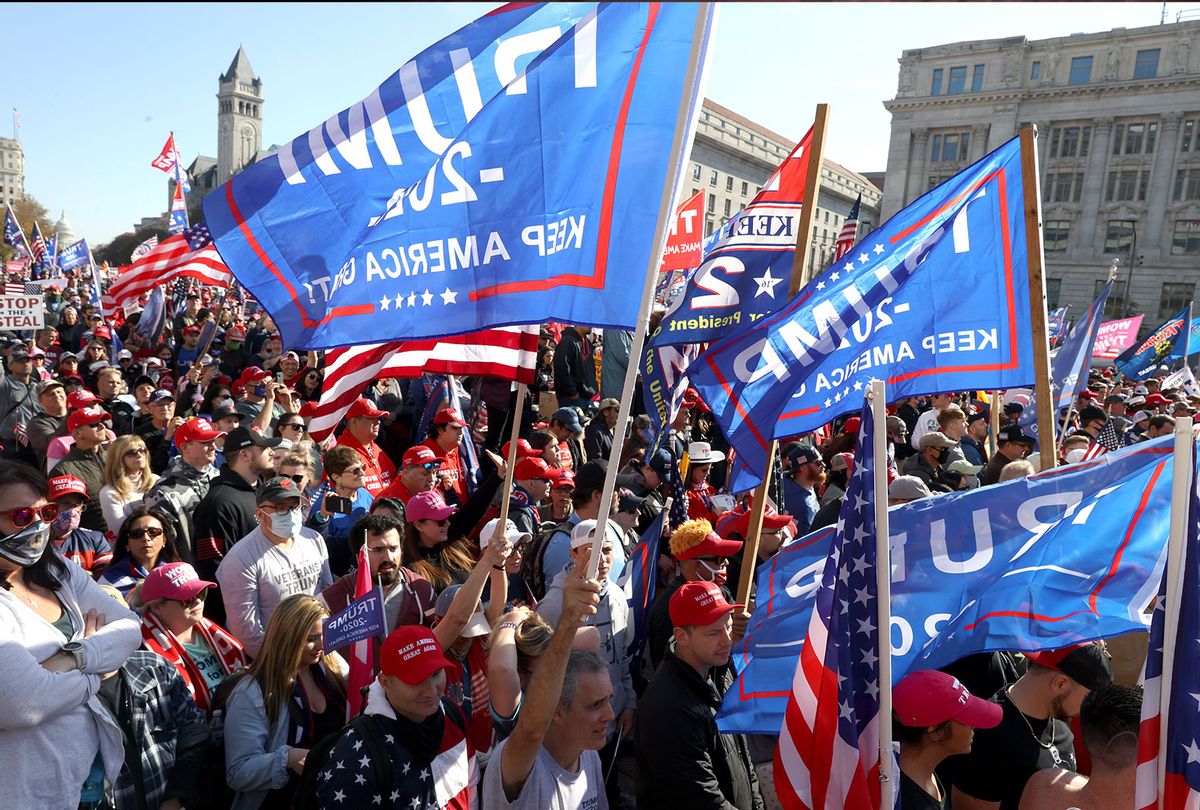 People participate in the “Million MAGA March” from Freedom Plaza to the Supreme Court, on November 14, 2020 in Washington, DC. Supporters of U.S. President Donald Trump marching to protest the outcome of the 2020 presidential election. (Tasos Katopodis/Getty Images)
--

In 1925, 50,000 members of the Ku Klux Klan marched on Washington, in what remains one of the largest marches in U.S. history. During the first decades of the 20th century, the Klan was one of the most powerful and influential civil society organizations in the country. Its members included doctors, lawyers and other members of the white professional class, including a future U.S. senator, a future Supreme Court justice and (according to various rumors) at least one future president. The Klan was and remains one of the largest terrorist organizations in American history.

Last Saturday, between 10,0000 to 15,000 supporters of Donald Trump, including right-wing street thugs, "militia" members, neo-Nazis and neo-Confederates, Klansmen, and other extremists gathered in Washington for the "Million MAGA March" in support of their soon-to-be deposed leader.

Trump's acolytes at the Million MAGA March did not wear Klan hoods, robes, and other regalia — today's "professional" white supremacists prefer tan khaki pants, golf shirts and MAGA hats — but they share the Klan's core values and beliefs. Most central of those is the credo that America should be a country where white people are the dominant, most important, and most powerful group, accorded special rights and privileges. It should be no surprise that the Ku Klux Klan formally endorsed Donald Trump's presidency in 2016.

On social media and elsewhere, the Million MAGA March was mocked as a "failure" and another sign that Trump's base of support is weakening. Trump and his marchers were also deemed to be "losers". Other observers perceived the low turnout at the march as evidence that right-wing political street gangs, QAnon conspiracists, white supremacist groups and other Trump cult members are now in "disarray" or experiencing "low morale" because of Joe Biden's victory in the 2020 election.

For many people, it feels good to deride and lampoon Trump and his followers after their electoral defeat. Such emotions are understandable, given the immense pain that Trump and his movement have caused so many people these last four or so years.

Biden's landslide victory also creates a communal feeling of joy — members of the "Resistance" feel reaffirmed in the righteousness of their struggle, knowing that they were in fact legion and not alone.

On the most basic level, Donald Trump and his followers are easy targets for Schadenfreude and other forms of mockery. Trump is a wannabe professional wrestling villain and fake billionaire, as well as a useful idiot for Vladimir Putin and other authoritarians. He is a man possessed by delusions of grandeur who lives in his own alternate reality. Trump's rank-and-file followers are the very definition of the rabble the framers warned of more than 200 years ago, who do not realize that their leader is a thoroughly corrupt con man who feels only contempt for them.

That may all be true, but Trump's power to inspire violence should never be underestimated. Last Saturday night following the MAGA march, Donald Trump's political thugs provoked numerous confrontations with anti-fascists, Black Lives Matter supporters and others deemed to be "the enemy". On Saturday, Trump exalted this lawbreaking and barbarism on Twitter:

ANTIFA SCUM ran for the hills today when they tried attacking the people at the Trump Rally, because those people aggressively fought back. Antifa waited until tonight, when 99% were gone, to attack innocent #MAGA People. DC Police, get going — do your job and don't hold back!!!

In a fundraising email sent on Monday, Trump continued to cheer on violence by his followers:

The silent Fake News media is truly the Enemy of the People! They are ignoring the Radical Left ANTIFA SCUM assaulting Trump supporters, who are proudly (and peacefully!) showing support for their favorite President.

However, this doesn't come as any surprise — this is what Biden's America would look like.

The Left HATES YOU. They want to keep you DOWN and keep you SILENT because they are afraid of YOU and everything you stand for.

We can't let them get away with this. It's important that EVERY Patriot comes together at a time like this to send a united message that we will not stand for their radical actions any longer.

The Million MAGA March would end with 21 people arrested. Eight guns were confiscated by police. One man was hospitalized after being stabbed multiple times by right-wing street thugs. Two police officers were also treated for injuries.

This relatively minor outbreak of street violence at Trump's MAGA march is but a preview of what will likely happen all across the country in the weeks before Trump is removed from office in January. Right-wing political violence will most certainly continue and escalate in response to Joe Biden's presidency.

Extremism analysts say the hastily organized attempt to gather the right under a single banner — for now it's "Stop the Steal" — is a chilling reminder of the Unite the Right rally in Charlottesville, Va., in 2017. They say the thousands who showed up Saturday represent countless others who followed via social media, donated to travel funds or watched from home — on Fox News, for those with a foot still in reality, on InfoWars-style channels, for the fully inculcated.

Brian Levin, a California-based hate and extremism researcher, called the Million MAGA March the debut of the pro-Trump insurgency, a preview of the "multiheaded Hydra" of far-right opposition expected when President-elect Joe Biden takes office.

Levin said the loyalists who showed up in Washington are only the public face. The bigger concern, he said, are the extremists "whose names we don't know yet," plotting in the shadows.

"Irrespective of the crowd," Levin said, "the fact that this is being organized shows that the hard, hard right is angling for some kind of activity to show that they have some potency."

Biden defeated Donald Trump on Election Day by a historic margin. But Biden's victory is but one battle in a very long war. To the immense shock and discomfort of many observers, Trump received more than 73 million votes, at least 10 million more in 2016.

Biden and the Democrats won this round, at least at the presidential level. But white supremacy in the form of Trumpism has not been vanquished, and its takeover of the Republican Party and the American conservative movement appears complete. If anything, American fascism and racial authoritarianism are now more powerful than at any time since the formal end of Jim and Jane Crow American apartheid in the 1960s.

For four years, white supremacists held power at the highest levels of the American government. For a movement which was isolated to the periphery of society in the post-civil rights era, that is a remarkable achievement.

The white supremacist policies put in place by the Trump regime impact every area of American life.

During Trump's time as president, white supremacists and the white right more broadly have been able to mainstream the false narrative that nonwhite people are "invading" Western nations, including the U.S., and "replacing" the current population (understood as predominantly white). This is part of a larger pattern where the language of "white nationalism" (verbiage developed by white supremacists to make their hate message more palatable for the public) has also been made more mainstream under the Trump regime.

In all, the Age of Trump has broadened the limits of approved public discourse in the United States. Racist and white supremacist ideas and language that not long ago were considered verboten are now increasingly acceptable.

White supremacy was not defeated in the 2020 election. In many ways, it scored a victory -- perhaps most notably in how the appeal of Trumpism has now spread beyond his core base of white followers.

In a case of political Stockholm syndrome and identifying with one's abuser, initial exit polls show that 26 percent of Donald Trump's voters were non-white. His support also grew among women and the LGBTQ community. Such growing appeal does not make Trumpism less racist and white supremacist or less misogynistic. Rather, what this broadening base of support reveals is that many millions of Americans — of different backgrounds — are attracted to Trumpism's core values of nationalism, militarism, nativism, misogyny, patriarchy, hypermasculinity, right-wing libertarianism, racism and Christian fascism.

Conservatism and racism have been the same thing in America since at least the 1960s. The Age of Trump has made that even more obvious. In that way, the Age of Trump has been a grand triumph for white supremacy: It has shown the Republican Party's leaders that becoming an explicitly white racist organization is not an impediment to power. Indeed, it may even be a way to achieve and keep power in a country that, by many demographic measures, is becoming more racially diverse.

While many political observers and members of the press desperately hope otherwise, Trumpism has not shown itself to be a house of sand and mud that will collapse once Donald Trump leaves the White House.

Fascism is not exclusively a European phenomenon, or some other type of "foreign" invention. Fascism's American origins are the racial authoritarianism and violence of Jim and Jane Crow — and now a renewed and updated 21st-century commitment to white minority rule.

Furthermore, Trumpism is but one iteration of American neofascism. There will be others. Whatever its label and form, American neofascism has fully mated with the Republican Party, the right-wing media machine, right-wing Christian fundamentalists, and the agents of plutocracy and gangster capitalism. To wit: it drew at least 73 million people to vote for Donald Trump in the 2020 election.

Donald Trump is more than a man to his followers and cult members. He is a symbol and an idea — ideas cannot be exorcised or otherwise defeated in one electoral cycle. Moreover, the United States is a pathocracy. Sick societies produce sick political movements and leaders.

Many Americans, both experts on race as well as laypeople, have hoped that white racism in its various forms would slowly disappear from American life and politics through a process known as "generational replacement," in which older people die and younger people with more liberal and progressive ideas replace them. Exit polling from the 2020 presidential election complicates that narrative: Young white men apparently supported Donald Trump by about 51% to 45%.

There is a deep yearning among many of America's pundits, political reporters and other public voices on both the left and the right — loyal as they are to the civic religion of American exceptionalism — to throw the Age of Trump down the memory hole. They would like to declare premature victory and pronounce that Trumpism and its devotees are in "disarray" or have been decisively defeated. And of course, there is the naïve and enduring belief that Trump's followers can somehow be reasoned with and then  convinced to reject authoritarianism and rejoin democratic society — if only their "pain" and "anger" is heard and acknowledged.

Such feelings and beliefs reflect the desperate yearning and compulsion to return to a pre-Trump state of "normal." That will not be possible without a true reckoning with the Age of Trump, one that goes well beyond stories about personalities and the controversy of the day or week. Such a reckoning will demand that the country's elites, especially its journalists, pundits and other political observers, focus on the force of ideas. American neofascism held power for (at least) four years. It will hold sway over the Republican Party and the American right for many more years, likely decades into the future.