Pfizer, one of three companies to announce vaccine breakthroughs, wants to rush development of its COVID vaccine 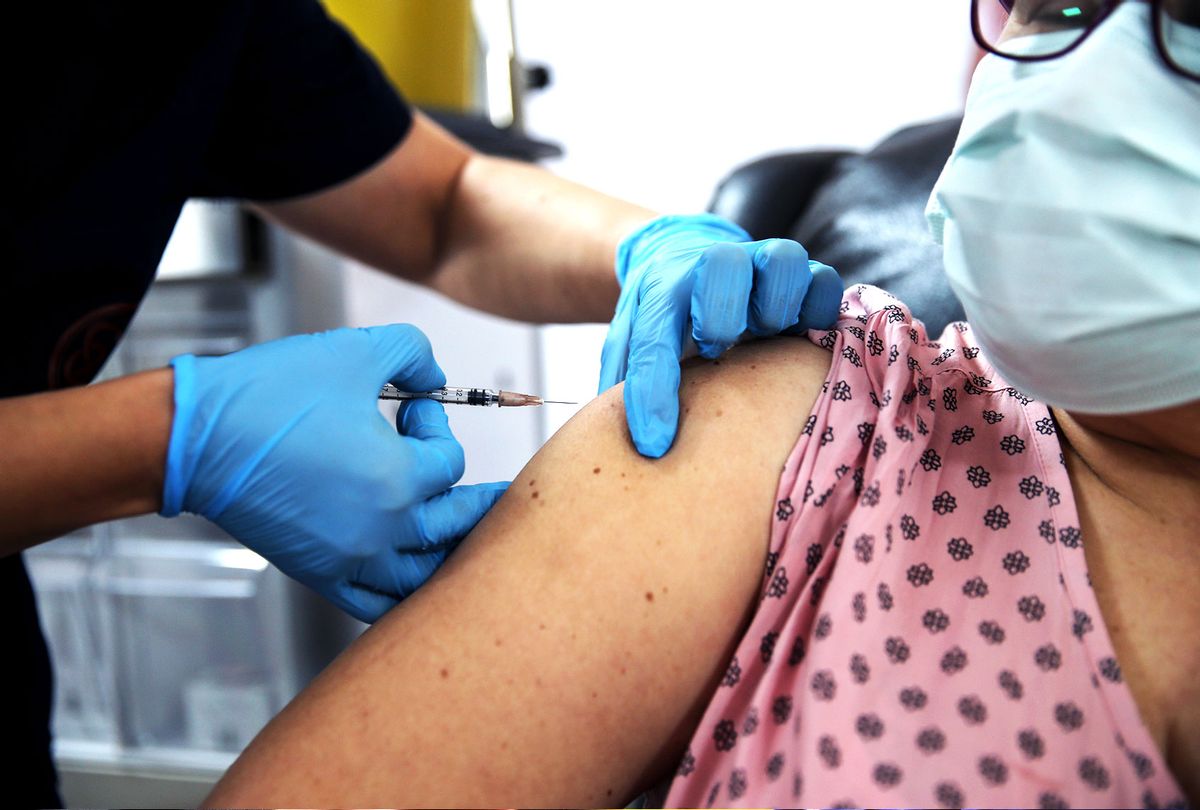 A health care worker injects the a syringe of the phase 3 vaccine trial, to a volunteer at the Ankara University Ibni Sina Hospital in Ankara, Turkey on October 27, 2020. This vaccine candidate developed against the novel coronavirus (COVID-19) pandemic by the U.S. Pfizer and German BioNTech company. (Dogukan Keskinkilic/Anadolu Agency via Getty Image)
--

Pfizer and BioNTech, a pair of pharmaceutical companies that announced earlier this month that they have developed a COVID-19 vaccine candidate which is more than 90 percent effective, are applying to the Food and Drug Administration (FDA) for an emergency use authorization that would allow for quicker distribution of their vaccine.

"Filing in the U.S. represents a critical milestone in our journey to deliver a COVID-19 vaccine to the world and we now have a more complete picture of both the efficacy and safety profile of our vaccine, giving us confidence in its potential," Dr. Albert Bourla, Chairman and CEO of Pfizer, said in a joint statement released on Friday. "We look forward to the upcoming Vaccines and Related Biological Products Advisory Committee discussion and continue to work closely with the FDA and regulatory authorities worldwide to secure authorization of our vaccine candidate as quickly as possible."

Bourla also told NPR's All Things Considered on Thursday that once the vaccine is authorized by the FDA for emergency use, "we will be ready to start distributing our vaccine within hours."

Pfizer and BioNTech are not the only pharmaceutical companies to make big vaccine announcements this month. On Monday the biotechnology company Moderna announced that its vaccine candidate is 94.5 percent effective at preventing the coronavirus infection that results in COVID-19. Then on Thursday Oxford University and AstraZeneca announced that their vaccine candidate is safe and provokes a strong immune response in elderly patients.

The Pfizer/BioNTech vaccine candidate and the Moderna vaccine candidate are both similar in that they are mRNA (synthetic messenger RNA) vaccines. This means that they operate using mRNA, which is the part of a life form's DNA that helps cells make proteins so that they can remain healthy. mRNA-based vaccines manufacture synthetic RNA that has been engineered to emulate the virus in question. Once injected into the human body, the vaccine trains the cells to produce proteins similar to those already found in the virus, which empowers the immune system to effectively fight it off.

At the time of this writing more than 57 million people worldwide have been infected with the coronavirus and almost 1.4 million of them have died, according to the Johns Hopkins University & Medicine Coronavirus Resource Center. That number includes 11.8 million cases in the United States, of whom more than 250,000 have died.