On his way out the door, said one economist, "Mnuchin is effectively trying to create a financial crisis" 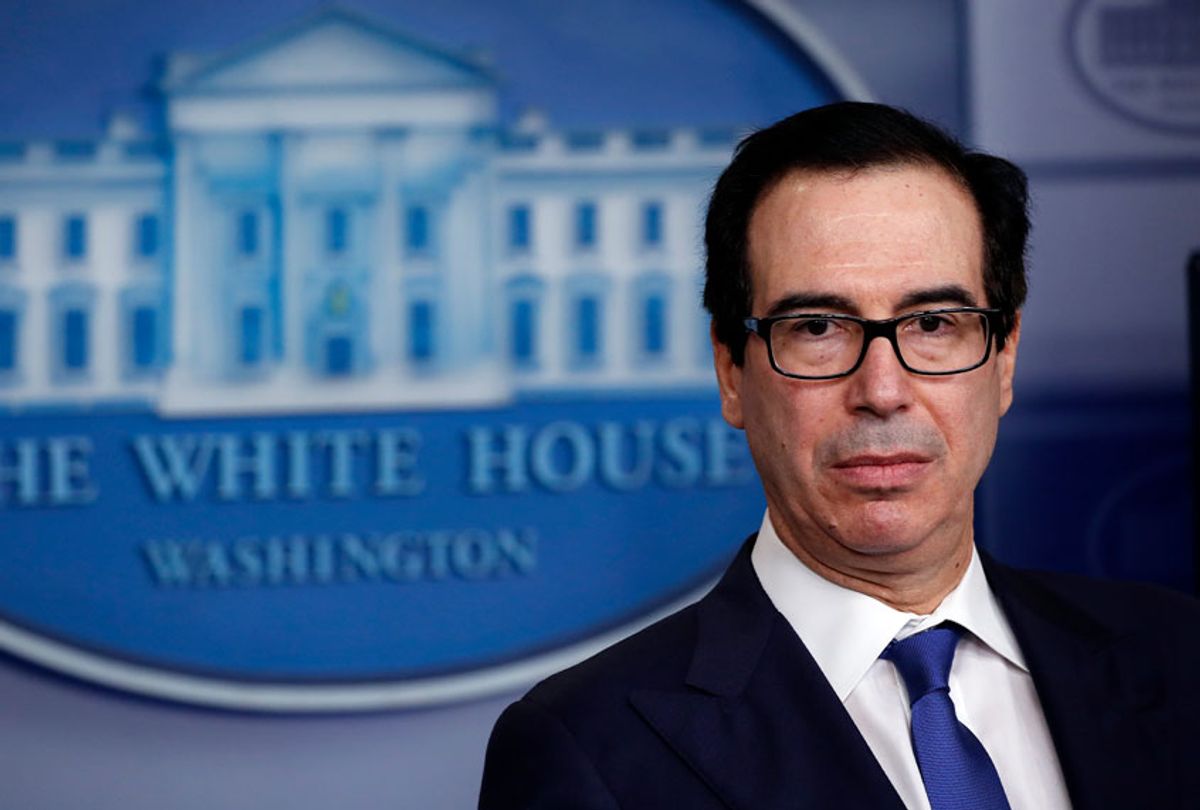 CNBC's reporting quoted one financial expert who likened the move by Mnuchin to stripping a ship of its lifeboats when they're most needed. The outlet explained:

Mnuchin announced Thursday that he will not extend the Federal Reserve's emergency lending programs that used Congress' CARES Act funds beyond Dec. 31. The move is expected to drastically reduce the central bank's ability to shore up the financial system.

"I don't think there's a good economic or public health or social reason to explain why they want to cut these programs," he added, "so it's kind of got to be politics, doesn't it?"

"With respect to the facilities that used CARES Act funding," Mnuchin wrote Thursday to Federal Reserve Chair Jerome Powell, "I was personally involved in drafting the relevant part of the legislation and believe the congressional intent as outlined in Section 4029 was to have the authority to originate new loans or purchase new assets (either directly or indirectly) expire on December 31, 2020."

Mnuchin's letter, as Bloomberg News reported, elicited swift rebuke from Powell. In a statement released "minutes" after Mnuchin's letter, the Fed urged that "the full suite of emergency facilities established during the coronavirus pandemic continue to serve their important role as a backstop for our still-strained and vulnerable economy."

The Trump administration's move sparked a chorus of criticism from economists including Paul Krugman.

In a Friday Twitter thread, Krugman said "Mnuchin is effectively trying to create a financial crisis, or at least make one more likely." Krugman added that "basically we're looking at more sabotage by an administration on its way out."

Krugman was far from alone in his criticism:

Mnuchin's announcement also drew scathing rebuke from Neil Barofsky, former inspector general of the Troubled Asset Relief Program, who described the programs' move to the chopping block as a "reckless political decision," and called on the Trump administration "not [to] succumb to the political temptation to straitjacket its successor."

In his Friday op-ed at the New York Times, Barofsky urged Mnuchin to follow the approach of the George W. Bush administration's outgoing Treasury Department when it "did all that it could to preserve President-elect Barack Obama's discretion to use congressionally approved bailout funds from the Troubled Asset Relied Program ... to steer our nation's recovery."

Trump's Treasury Department, wrote Barofsky, "should reverse [its] reckless course and follow the precedent set with TARP by extending these programs to give the newly elected administration as much flexibility as possible."

"It makes no sense to celebrate the programs for the success they have had in calming markets," Barofsky added, "while at the same time pulling the rug out from under them at a time when they are likely to be most needed."