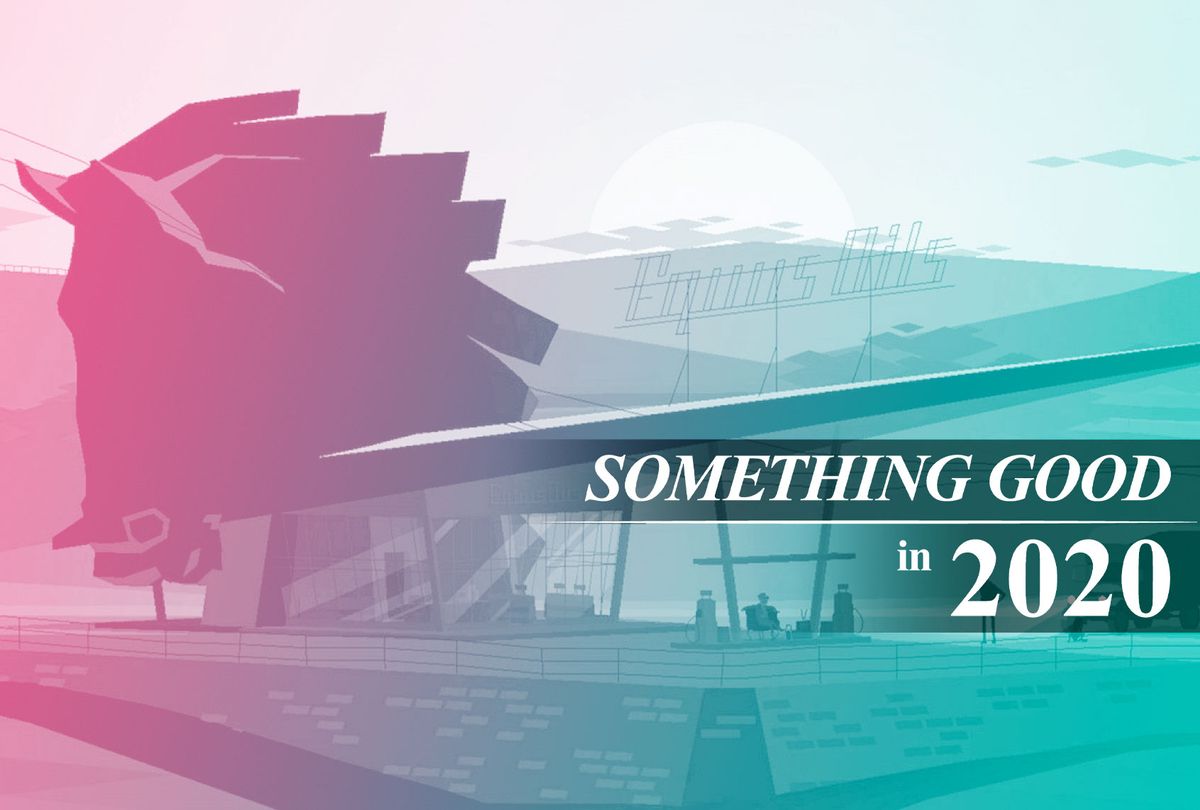 "Kentucky Route Zero," an episodic video game about 8 years in the making, is a Gesamtkunstwerk par excellence. Ostensibly the story of a docile delivery driver puttering about rural Kentucky in an attempt to reach a mysterious highway known as "Route Zero," that initial seed soon opens up an entire world of surreal intrigue — Kafkaesque bureaucracies, sound artists and television repairwomen, who flit in and out of this world.

While the makers self-describe it as a "magical realist adventure game," the game's major underlying theme is that of rural poverty and of community: the characters confess to their struggles with healthcare, or with money, or with artistic success, or with government bureaucracy. Yet what keeps them going is their communitarian bonhomie, revealed through dialogue and the quick friendships one strikes with these helpful strangers.

What makes it qualify as a Gesamtkunstwerk, you ask?  "Kentucky Route Zero" merges screenplay, theater, music, design, art and telephony. Better yet, it eschews the problem of the vast majority of video games, namely, that they are too reliant on tropes of user interface control that only a seasoned gamer would understand. There's no need to memorize when to push X or ▢ or ◯, and it's near-impossible to get lost or "stuck."

And let's talk about that weird, sprawling story. It is written in five "acts," with entr'actes that often bring in briefly-mentioned side characters and expand upon them. In one scene, you're in a small community theater, turning in circles, listening to the dialogue of actors on stage, then turning towards the audience, then back again; the lighting and the sound shift as you do.

In another scene, an experimental band takes the stage at a dive bar. The music changes dynamically as the player presses their verse of choice — letting the user dynamically write the song as it's being performed.

Indeed, music is intrinsic to the experience, and the game features a haunting, kitschy, folk-inspired soundtrack, which can be streamed on Spotify. Composer Ben Babbitt's "Long Journey Home," appearing in the game's first act, is a catchy and melancholic banjo folk ballad that sounds as if it were directly recorded from a rural Kentucky farmhouse's creaky front porch.

The game's art is surreal and blocky, which opens up just enough of one's imagination that half the story is in one's head: the character's body movements are pained and emotive, yet their expressions blank. In between those two poles, your imagination fleshes out the characters.

If I were forced to define it, I might call "Kentucky Route Zero" a twenty-first century merger of a Southern Gothic and magical realist novel. It is post-modern in the realest sense of the word, in that it transcends the gaming form, and comments on itself — something known as "metatext" by academics. The most impressive metatextual element is not even technically in the game: it's a phone number that you dial, for the Echo River Tourism Bureau, which is alluded to in gameplay. In fact, you can experience it right now, from your phone, for free: Dialing (270) 301-5797 leads one to a surreal automated menu for the fictional bureau. "If you don't remember dialing this number at all, press 5," the operator coos at the conclusion of the first menu's monologue.

Video games are certainly the premier artistic genre of the twenty-first century, but it's rare to find one that truly transcends the form. Computer games were forged in the heart of the military-industrial complex; the first games, historically, were war games, and they've been stuck in that rut since. The most popular video games today generally involve killing, first person shooters or RPGs; the obsession over "points" and "high scores," the quantification of victory and killing, emerged as a video game trope because it resembled military-style thinking.

Yet "Kentucky Route Zero" not only subverts that, but rethinks what a video game could be — opening up the creative and artistic potential of a genre that tends to be stuck in its ways. It's a true Gesamtkunstwerk. It was the highlight of my 2020, and a reminder that great art can still exist, even when the rest of the world is on fire.