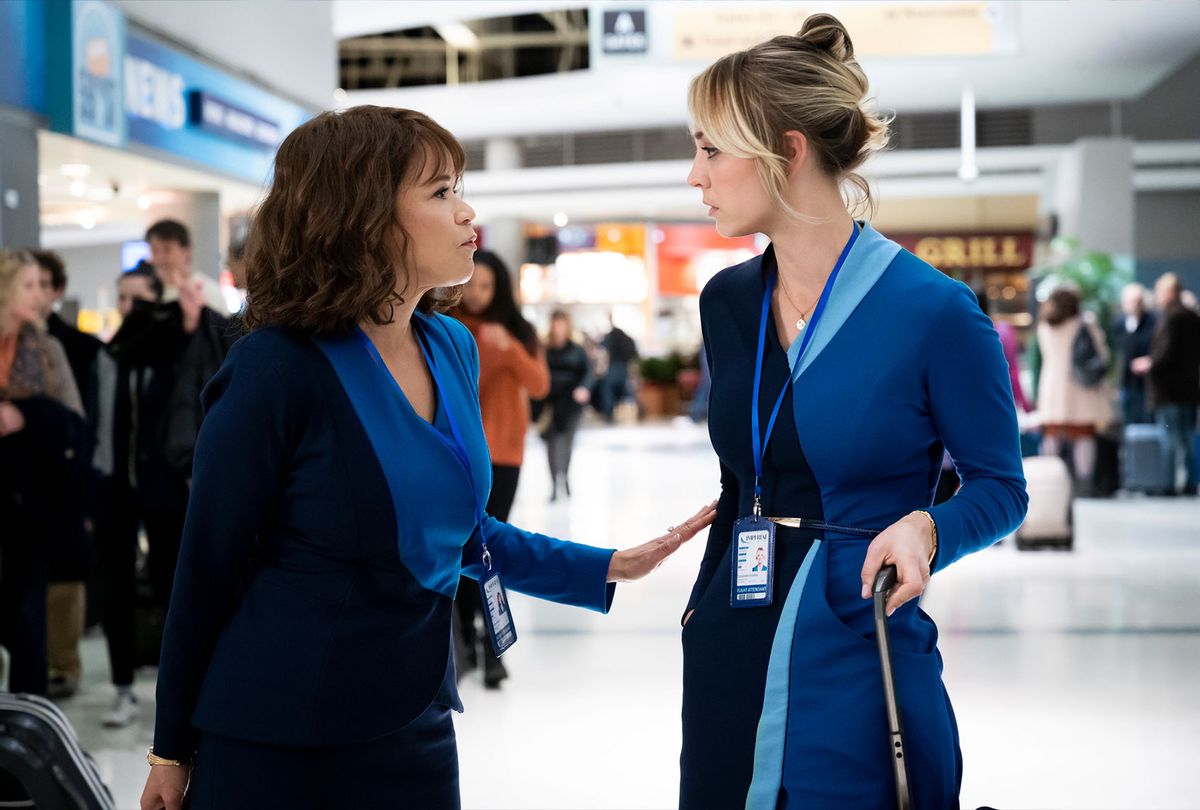 Gratitude may be the word of the day, but can we talk about its underappreciated cousin at the dinner table for a moment? Satisfaction is what we hunger for on this holiday, not just in terms of what we take in through our mouths but our eyes. Devouring a good show with a side of pie certainly helps the occasion stick the landing.

"The Flight Attendant," a new streaming series starring Kaley Cuoco in her first major live action role post-"The Big Bang Theory," achieves that digestible sort of fullness, the kind we get from a show that's lively, nimbly acted and substantial, that achieves an ideal balance between danger and lightness. Few shows can legitimately lay claim to finding that mix of good times, high anxiety and earnest pain while faithfully refraining from taking itself too seriously.

Playwright Steve Yockey deserves credit as the architect of that feeling, since he's the one who adapted the series from Chris Bohjalian's 2018 bestseller. Above all, really, this is Cuoco's show fully and completely — her entirely possessed rendering of a party girl coming undone is the mystery's main propulsion. More than this, it proves her range extends well beyond what we've seen of her in the many sitcoms that have defined her career up until now, with "Big Bang" only being the most recent in a string stretching back to her child actor days. (She also voices the title character on the excellent "Harley Quinn," which, again, is a conscious choice to take a sledgehammer to preconceived notions about her image.)

Cuoco's "Flight Attendant" character Cassie Bowden and Penny from "Big Bang" are of a kind, yes. But Cassie's shadows let the audience know early on that her good-time persona is a front. As the story opens we bask in Cassie's gift for sniffing out the best bars, parties and clubs at every destination. She's also far too gifted at holding her vodka.

Her flaws notwithstanding, Cuoco also gives us a woman we could simply idealize, one with style and a sexual confidence that wows everyone around her. She's obviously a wreck, but one who flexes admirable bravura.

So when Cassie flirts with a mysterious stranger in first class, getting his card and his name — Alex Sokolov (Michiel Huisman) — it's all but a foregone conclusion among her co-workers that the pair will hook up. Even here, however, she does so with an intellectual flair: She ribs him about his choice to read "Crime and Punishment" on an international flight, characterizing herself as a "Doctor Zhivago" kind of girl. Maybe she's read it. Maybe she simply knows it's the right response to get him on the line. Whatever the truth is, he bites, telling her that he finds "Zhivago" messy.

"What's wrong with messy?" she purrs in reply, and the circling begins.

Their whirlwind drunken overnight date in Bangkok passes like a dream; a more honest reading of the situation would call it a glamorously wasted blackout drunk. Dress it up however you'd like, but in the unpretty morning after, Cassie wakes up next to Alex's bloodied dead body with no memory of what happened.

From here the seductive romp falls away as the thriller kicks in. The twisty energy launched and sustained by Susanna Fogel's directing in the first two episodes keeps "The Flight Attendant" briskly paced as Cassie dashes from one problem to the next, each of her own creation and worsening with every ill-advised move she takes. If the scripts weren't so smart, and Cuoco weren't as assured in selling Cassie's messiness, we'd be screaming and groaning at the screen.

Cheering her on feels right instead.

Written into this character is an expanse of internal conversation and conflict, and while this initially plays like a clever means of staging her efforts to piece together whatever details she can fish out of her blackout drunk, it soon deepens into something more forlorn. Thus the foolhardiness of Cassie's dumb moves putting her in greater peril are earned while never diminishing the sharp cleverness in her performance.

Leveling out her chaos are performance by Rosie Perez and Zosia Mamet as Cassie's co-worker Megan Briscoe and her best friend Annie Mouradian, who fortunately for Cassie also happens to be a shark-like attorney. The deadpan personality Mamet lends to Annie is a crisp counterpoise to Cuoco's mania and far more effective as an oppositional weight than T.R. Knight's Davey, Cassie's long-suffering sibling. (In fairness, within the four episodes provided to critics, Knight has far less screen time.) Perez, meanwhile, is hard to peg, which makes things interesting. It's also unclear what to make of her relatively muted presence early on, although she's given far more complexity to work with as the series progresses. Soon enough she's having fun playing in the dark too.

All of this lends a frisky appeal to "The Flight Attendant" while inviting the audience to contemplate what drives a woman to the verge. The title character's guidance system is entirely made of compulsive behavior regardless of how self-destructive it may be. Cassie's uncontrollable urge to get to the bottom of this mystery to save her own skin is matched only in ferocity by her alcohol abuse, and both are a means of grappling, unsuccessfully, with a massive shock that's shaking loose an older darkness she's been medicating away with alcohol, flight and risk.

Viewers unaccustomed to watching Cuoco combine soulful darkness and comedy in freefall will experience something new from her in "The Flight Attendant," and whether it expands into a second season or remains true to its eight-episode limited series designation, this is firm proof that she's capable of much more than traveling light.