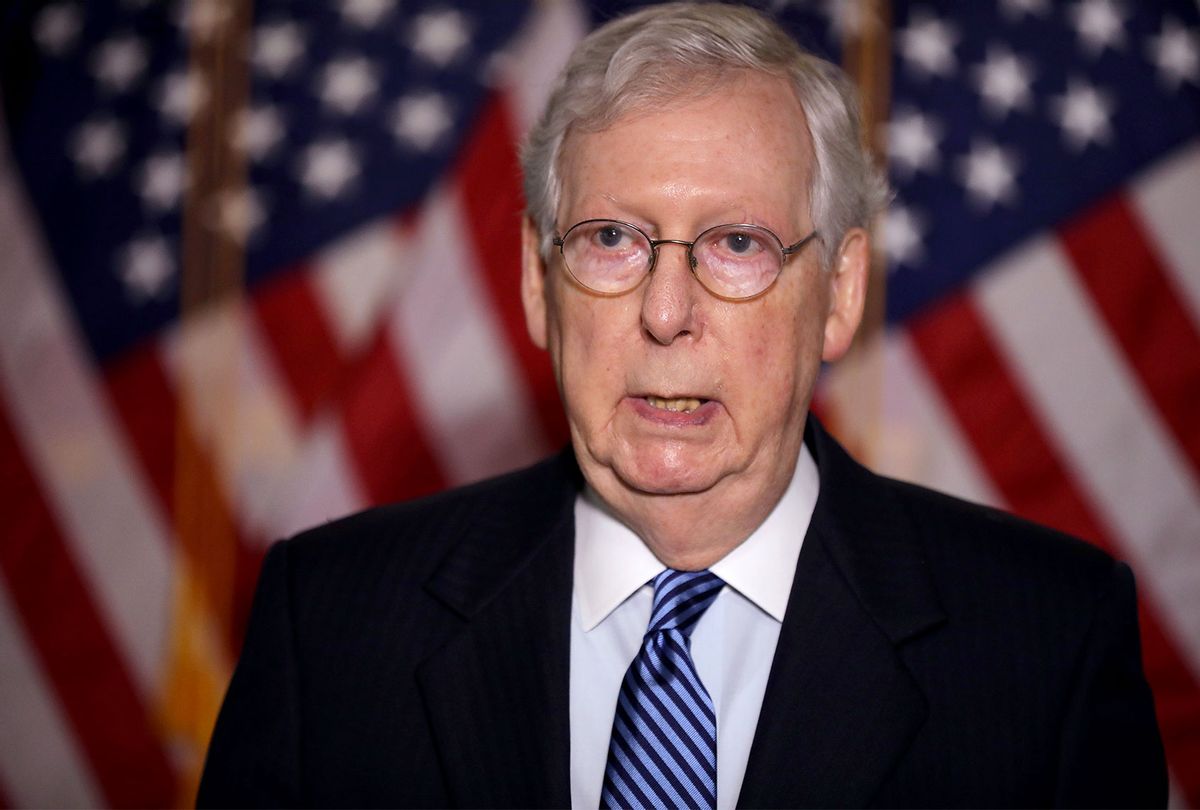 President-elect Joe Biden has often stressed that during his many years in the U.S. Senate, he frequently worked with Republicans — including Sen. John McCain of Arizona and President Ronald Reagan — and getting things done along bipartisan lines. But liberal Washington Post columnist Greg Sargent has a warning for the former vice president: Senate Majority Leader Mitch McConnell has no interest in meeting him half way and will do everything he can to undermine Biden's presidency.

"We know that if he remains majority leader, Mitch McConnell will work to cripple the Biden presidency by saddling him with the terrible politics of a miserable recovery," Sargent warns in his column this week. "We saw him do this for years, mostly as minority leader, during the last Democratic presidency."

McConnell was consistently hostile to President Barack Obama during his eight years in the White House, but the Kentucky Republican was especially bad after Republicans obtained a majority in the Senate with the 2014 midterms and he became Senate majority leader.

Whether McConnell will be Senate majority leader or Senate minority leader in 2021 will depend on what happens in two U.S. Senate races that will be decided in runoff elections in January. The incumbent Republicans, Sen. Kelly Loeffler and Sen. David Perdue, are both far-right Trump supporters. If their Democratic challengers prevail — Jon Ossoff against Perdue, the Rev. Raphael Warnock against Loeffler — Democrats would obtain a narrow majority in the Senate.

If Republicans win one or both runoffs, Ossoff says, continued GOP control of the Senate will mean relentless obstruction of incoming President Joe Biden's agenda. That means a much more grueling economic recovery, a less-coordinated response to the coronavirus' latest rampage and a death knell for popular policies such as expanded health care and infrastructure investments. In short, unless Democrats win both runoffs — giving them control — it will mean far more economic misery, far more illness and death, and badly diminished prospects for long-term national revival.

Ossoff, during an interview, stressed to Sargent that McConnell has no interest in having a productive relationship with Biden after he is sworn in as president on January 20.

"If McConnell controls the Senate, he's going to block the kind of relief package that we need," Ossoff told Sargent. "And that means not just short-term, direct economic relief, but also, the kind of infrastructure jobs/clean energy program necessary to support long-term recovery. This paralysis of our government in the midst of a crisis is untenable. People are suffering, and they want government to work."

Biden will inherit some daunting challenges as president — not only a pandemic, but also, all of the economic problems the pandemic has caused. According to Johns Hopkins University in Baltimore, COVID-19 has killed more than 1.4 million people worldwide — including over 267,000 in the United States. And many medical experts are saying that those numbers could become much worse by the time Biden moves into the White House.

Sargent notes, "By blocking a big stimulus, McConnell can do a lot of damage. The coronavirus' spikes everywhere are requiring new health measures and a pullback from economic activity — only this time, previously passed federal aid programs are drying up. Last spring, Republicans backed a large aid package, when McConnell plainly calculated it would boost GOP electoral prospects. This fall, when he appeared to think another big stimulus couldn't save President Trump and his members balked at more spending, he opposed a second round."

McConnell would do the same thing with Biden, and according to Politico's Marianne Levine, some GOP senators would be just as obstructive.

Sen. Sen. Josh Hawley, a Missouri Republican, told Politico, "I imagine they'll have a tough time just because I'm not going to vote for people who I think are, to use my words, 'judicial imperialists.' But maybe he'll surprise me if (Biden) is indeed the president. Who knows, maybe he'll send up nominees who are constitutionalists and textualists. I kind of doubt it."

Republican Sen. Kevin Cramer of North Dakota, meanwhile, told Politico, "The good news is that we've done a good job — and we're not done, as you know — filling the vacancies that there are on the appellate courts to minimize the opportunity for more liberals on it."

Democratic Senate Minority Whip Dick Durbin is expecting the worst when it comes to how McConnell and other Senate Republicans will treat Biden's judicial nominees, telling Politico, "If the last two years of the Obama administration were any indication, they'll freeze them out. Hope springs eternal, but I believe in history."

Sargent wraps up his Post column by emphasizing that if Loeffler and Perdue are victorious in the runoffs in Georgia and McConnell continues to oversee a Republican Senate majority, the last thing Biden's administration should expect is a spirit of bipartisan compromise.

"A Republican victory in Georgia…. would also validate the GOP's use of declaring the election's outcome illegitimate as a successful political tactic," Sargent writes. "That's yet another way the stakes of these runoffs are so high — along with whether we get an ambitious governmental response to the profound crises we face."