Georgia senator sold his old company's stock in January, then bought it back cheap in March. How much did he know? 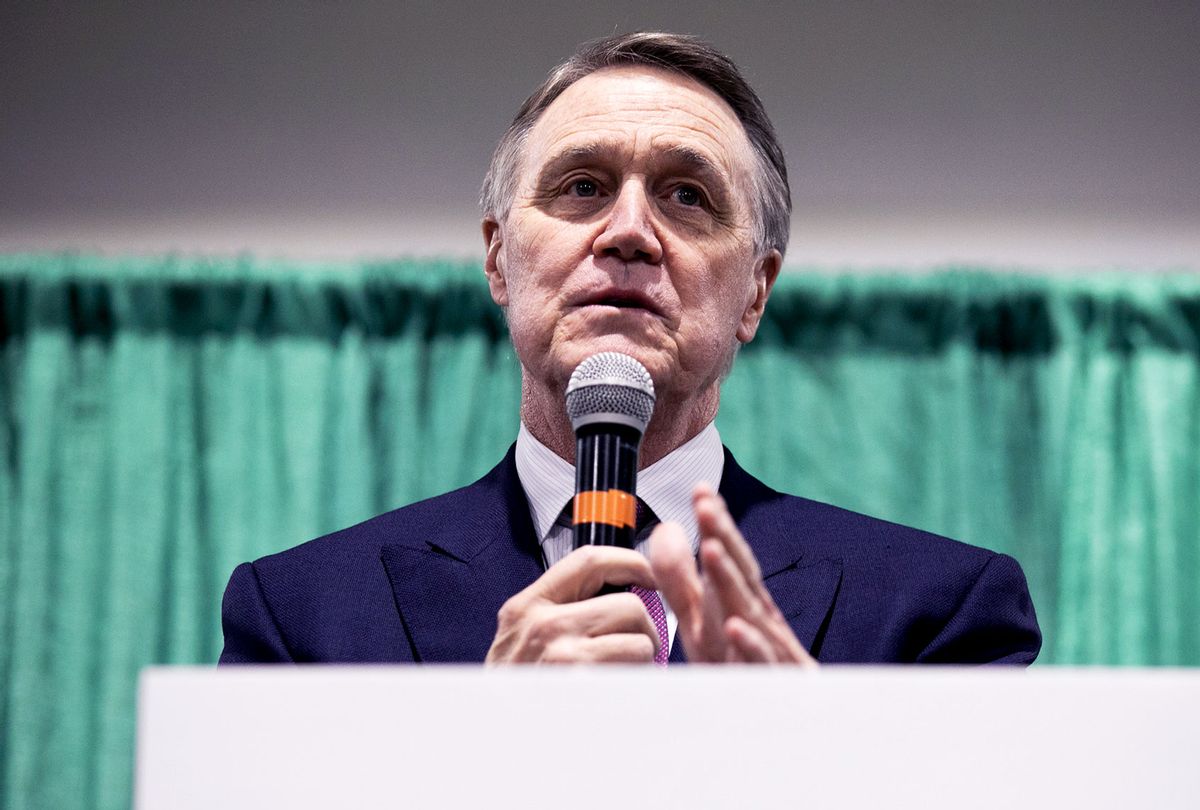 U.S. Sen. David Purdue (R-GA) speaks to the crowd of supporters during a "Defend the Majority" rally at the Georgia National Fairgrounds and Agriculture Center on November 19, 2020 in Perry, Georgia. (Jessica McGowan/Getty Images)
--

Earlier this year, embattled Sen. David Perdue of Georgia, one of two multimillionaire Republicans facing tight runoff elections that could decide control of the Senate, sold $1 million worth of stock in Cardlytics, a financial firm where he once sat on the board. What makes this stock sale especially interesting is that six weeks later, an executive shake-up at Cardlytics that sent the stock tumbling. After the share price hit its low point in March, Perdue bought back up to $500,000 worth of stock, which has since quadrupled in value.

The trades drew federal scrutiny, but Perdue argued that he did not personally direct any of his transactions. The New York Times reported last week, however, that Department of Justice investigators have found that Perdue had instructed his Goldman Sachs wealth manager to make the sale two days after receiving a personal email from the Cardlytics CEO that advised of "upcoming changes."

Now, new information raises questions about what else Perdue may have known was in store for the company in March, when he scooped up as much as half a million dollars worth of shares on the cheap.

Around the time of Perdue's buyback, the company quietly rolled out a "COVID-19 Dashboard" to help its clients track and target consumer spending during the pandemic. Executives appear to have first mentioned this dashboard in public, however, during a first-quarter earnings call in May.

In the call, Cardlytics COO Lynne Laube told shareholders that the company had developed the dashboard to help track real-time consumer spending during the pandemic "six, seven weeks ago" — around the time Perdue made his March 18 purchase.

Executives on the call repeatedly pointed to the dashboard as a key asset and market differentiator during the challenging economic conditions of the pandemic.

Outgoing CEO Scott Grimes, who had sent Perdue the "upcoming changes" email, said at the time that he believed the company was "probably in its best position ever and really well positioned to grow," and that he was "excited about new client opportunities that have risen in the rapid disruption of our economy."

Lynne Laube, Cardlytics COO and Grimes' successor as chief executive, reassured shareholders that the pandemic was "playing in our favor."

"I hate to say it's positive, because, obviously, this is a terrible situation, but it has — the trends are very much in the favor of our platform," Laube said on the call. (In 2016, Perdue, who once sat on the Cardlytics board, posted a picture of himself with Grimes and Laube to his official Senate Facebook page.)

"We've always talked about the power of purchase intelligence, and if there was ever a time that power is really shining, it's now," Laube continued, adding that the dashboard is "why we firmly believe we're going to be first back in for many of them, because we can spot at a very granular level where they should be spending."

"So it's a really cool dashboard," Laube concluded.

She elaborated further two days later at the JPMorgan Technology, Media and Communications Conference, saying the dashboard was the "first thing we did," and that it fed into a company-wide strategy and "gave us a real advantage" with marketers. Here's an extended quotation from Laube's remarks:

So when this happened, again, we're super advantaged in that we see all the data. So the first thing we did was build a dashboard so that marketers could really understand at a DMA level, at the week-by-week level, what was happening to their spend, their category spend and even related category spend. So they could really understand how they were faring relative to others in the category during this time. And that was a really powerful tool because even for advertisers who are doing well, so there's a category of advertisers, obviously, who benefited from this, there were plenty more doing as well as their peers. And so it gave us a real advantage to go in and have meaningful sales conversations with a number of advertisers. We've coined the strategy with how we're using this dashboard: Rise, retain and return.

The earnings call in May, along with its first-quarter investor presentation that day, appears to have been the first time Cardlytics executives mentioned the dashboard publicly. It does not appear among the press releases on the company's website, and does not show up in news reports before May.

While Cardlytics stock closed at $29.90 on March 18, one of its lowest price points of the year, it since more than quadrupled, to nearly $120. And in November, Laube, who is now the CEO, told shareholders on an earnings call that "we feel good about Q4" despite the potential for "another wave" of shutdowns, arguing that the company's data is "uniquely advantaged" and "more COVID-insulated."

This news adds to existing questions swirling around Perdue's profiteering amid the coronavirus pandemic, as well as new concerns about unrelated trades. A watchdog recently filed a complaint with the Securities and Exchange Commission accusing Perdue of abusing his position on a defense subcommittee to capitalize on insider trades, and a Salon report last week revealed that Perdue traded hundreds of thousands of dollars in financial stocks while passing pro-bank legislation on the Senate Banking Committee.

Perdue now holds Cardlytics stock worth up to twice as much as the profits he raked in from his $1 million January sale, and its value is poised to increase further along with the company's envisioned success: He refused to entirely divest his holdings in Cardlytics stock in May, despite public pressure and pending federal investigations.

The Perdue campaign did not immediately respond to Salon's request for comment.