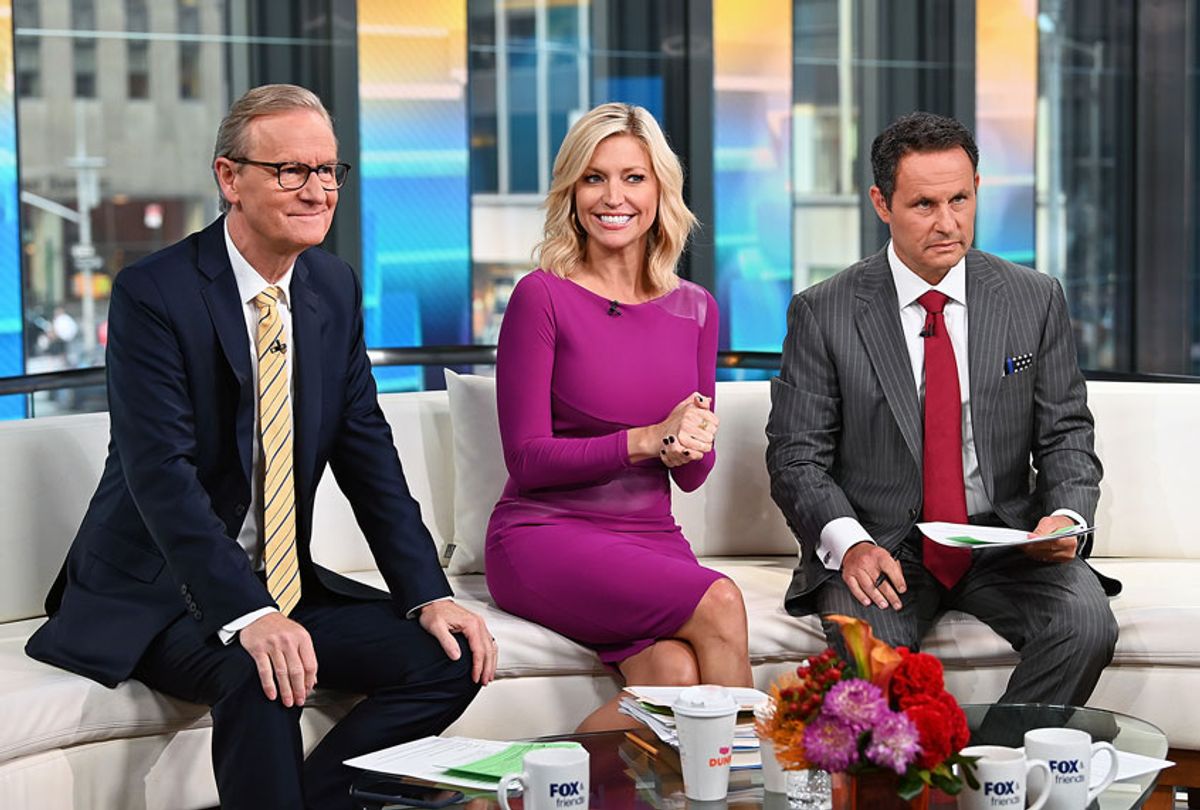 After 10 months of downplaying the coronavirus pandemic and disparaging government restrictions designed to mitigate the spread, the hosts of President Donald Trump's favorite morning show "Fox & Friends" devoted significant air time to an in-depth scientific study showing that mask mandates were an effective tool to combat the spread of the virus for the first time on Wednesday.

On the same day, the U.S. set new records for hospitalizations and deaths in one day.

Co-host Steve Doocy presented the study, which was conducted over the summer in his home state of Kansas and appears to have been published by the Centers for Disease Control and Prevention (CDC) about two weeks prior to the broadcast.

"Ultimately right now, what's going on with the pandemic is — and we don't know exactly how many people may have been infected over the Thanksgiving holiday weekend — but the number of cases in our hospitals is going through the roof," Doocy said. "And, in 41 states, it's going up."

"I read a great survey," he continued. "They looked at the scientific data in my home state of Kansas. In the month of July, they had a statewide mandate for masks. Now, the problem with Kansas was some counties would actually enforce it, and other counties would not. In the counties that enforced the mask mandate, the number of cases of coronavirus actually went way down. And in the counties where they did not enforce the mask mandate, it went way up."

"You just have to do it smartly," Earhart said, "and do it safely."

MSNBC host Brian Williams, who later showcased the segment on his evening broadcast, deadpanned that the discussion was "a breathtaking moment of situational awareness on live television."

Williams added that he believed Doocy's segment was an important artifact for a full moral accounting of the era.

"In the rush to a vaccine, in the rush to get life back to normal, to have a spring and summer in 2021 that feel like spring and summer, it's important we never forget who the deniers were," he said. "Because those 270,000 mothers and fathers, sisters and brothers, husbands and wives — they ain't coming back, so it's incumbent upon all of us to honor their memory."

Fox News has faced criticism surrounding its coronavirus coverage from the start of the pandemic, especially for the entertainment side of the network — though not exclusively. A Media Matters study this summer found that the "straight news" side of the network had contributed to 35% of its COVID-19 misinformation.

That same study found that of the 253 instances of misinformation that Fox News programs peddled in one week, 115 claims challenged government guidelines, such as social distancing and mask requirements. (It also found that "Fox & Friends" was one of the network's top two culprits for pushing misinformation.)

Another study in May, conducted by researchers at Columbia University and the University of Chicago, linked Fox News viewership with reduced compliance with states' stay-at-home orders in a new working paper published by the National Bureau of Economic Research.

But while a number of the network's hosts, including Tucker Carlson and Laura Ingraham, have falsely presented masks as a tool of government oppression with no grounding in medical science, others have gently urged the public to adopt them.

Fellow primetime host Sean Hannity, who has urged viewers to wear masks on his show, released a PSA in July saying he did not "have a problem wearing a mask" to "defend grandma."

Doocy himself urged the president to wear a mask this June as a "powerful symbol" to encourage his supporters to "slow down the spread of this thing."

"Let me start by saying the CDC has put out considerations as we prepare to go about Thanksgiving — about socially distancing, wearing masks, doing what you can," she said, adding that such "considerations" were "the American way."

As for the types of mandates that Doocy endorsed this week, McEnany described them as "Orwellian."