Dr. Fauci's gamble pays off — white-knuckling his way through Trump set him up to steer Biden

For months, Fauci endured calls to resign in protest, but it's good he didn't — now he can shape vaccine policy 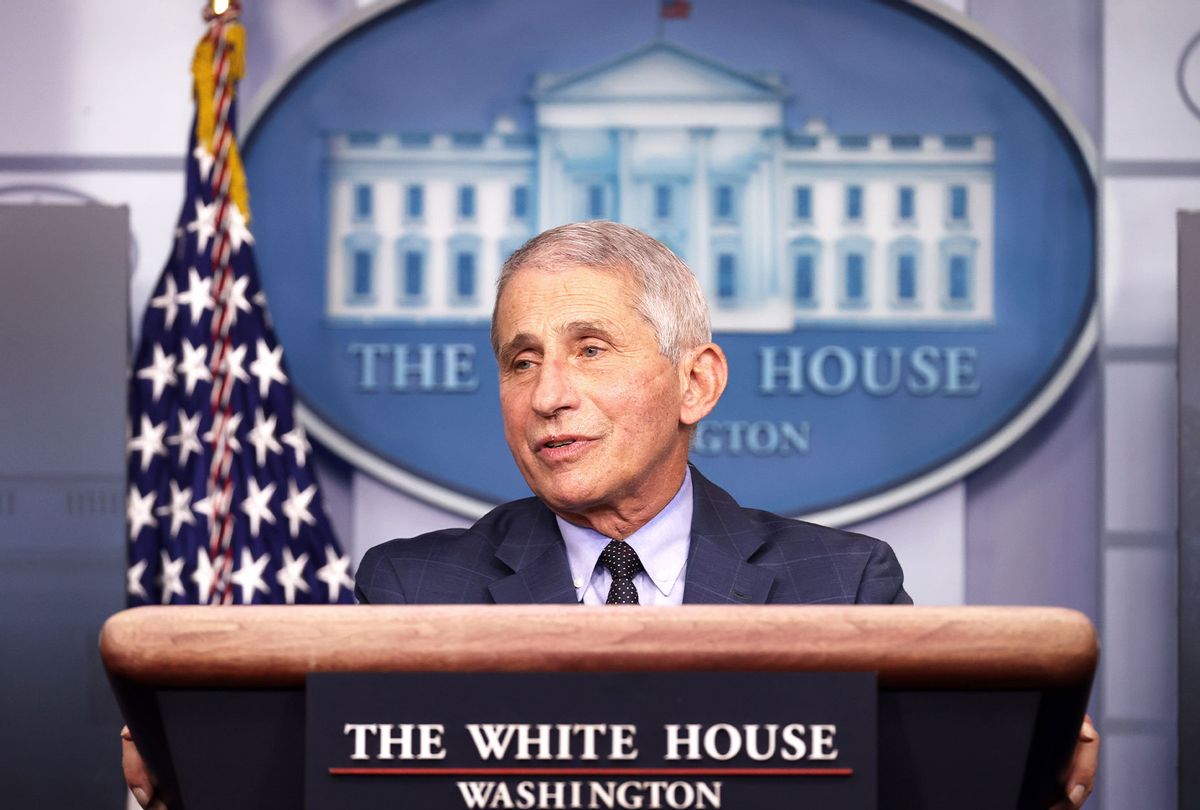 After a career of being largely unknown to the vast majority of Americans, Dr. Anthony Fauci, who has headed the National Institute of Allergy and Infectious Diseases since 1984, has become a celebrity during the pandemic. With Donald Trump both unwilling to take a responsible leadership role and frankly incapable of it, Fauci filled in the void. Despite working full days directly on the pandemic, he also did countless TV interviews and appeared at multiple congressional hearings, all to educate the public about the coronavirus and encourage steps to limit its spread.

No good deed goes unpunished, and Dr. Fauci has learned this lesson more than anyone. For his efforts, he has spent months being terrorized by Trump, who is childishly jealous of the positive attention Fauci gets, and is incapable of understanding why people might like the kindly old medical expert more than they like the raving sociopath in the Oval Office.

To add insult to injury, Fauci has also been called upon to resign his position. Not by Trump's loyal supporters who want to believe that COVID-19 is somehow a "hoax" (although they certainly called for Trump to fire him) but by people who do take the virus seriously. For months, Fauci has heard repeated calls to walk away from his job, in protest of Trump's malicious and incompetent handling of the pandemic.

But Fauci's strategy of hanging in and meeting Trump's vitriol with bland responses, while it may not have been dramatically satisfying, turned out to be successful: Not only is President-elect Joe Biden planning to keep Fauci on in his current role, the incoming president is also designating the famous disease expert as his chief medical adviser.

Public health officials will soon face not just the biggest logistical problem of their careers, but quite possibly the knottiest problem likely ever faced by the public health infrastructure: How to distribute vaccines to nearly 330 million Americans efficiently and effectively.

We're going to need Fauci for this. He probably knows more than any single person in the country about the shape and size and challenges of this disease. His experience will be invaluable, if there's any hope of bringing an end to the COVID-19 pandemic anytime soon.

On and off throughout the pandemic, in response to Trump's various efforts to make things worse, there have been a chorus of voices demanding that Dr. Fauci stand up to Trump by resigning.

Describing both Fauci and his colleague Dr. Deborah Birx, Nicholas Goldberg of the Los Angeles Times wrote this: "But surely late at night, they must have moments of moral doubt, looking hard into the mirror and asking themselves whether they've made the right decision to stick by President Trump's side."

In July, a White House memo was leaked detailing efforts by administration officials to discredit Fauci. Trump did little to disguise his hatred of the nation's leading infectious-disease expert, both because of petty personal jealousy and because he resented Fauci for insisting the virus was a real and serious threat, which ran contrary to Trump's desire to pretend it was no big deal and likely to "disappear" any day now.

In response, NYU professor of medical ethics Arthur Caplan escalated his calls on Fauci to resign, claiming, "Anyone who cares about facts, truth and public health ought quit this vacuous coverup."

In response to the same incident, Joel Mathias of The Week wrote, "Quitting would allow Fauci to speak to the public more freely about the ongoing health crisis than he can now."

Annoyance at Fauci's refusal to resign was heightened by his tendency to make bland and genial public comments about Trump, clearly as a way to soothe the notoriously thin-skinned president's ego. When a Trump campaign ad falsely implied that Fauci had offered lavish praise for Trump's handling of the pandemic, his critics took this as further proof that the doctor had failed by not resigning in protest months earlier.

For journalists, of course, it made some sense to focus on Fauci's public presence and how it had been hamstrung by having to tiptoe around the mercurial and intensely envious creature in the White House. Politics and communications are what journalists do, and it was frustrating to see Fauci refuse to do more to undermine Trump.

But communications is only part of Fauci's job, and probably not the most important part. He certainly makes a lot of media appearances, but his principal task is to run a major federal agency dedicated to fighting infectious disease. Under Fauci, the NIAID has been heavily involved with the research side of the pandemic, helping develop clinical trials for the vaccine and outline treatment strategies for COVID-19 patients. Fauci clearly believes that communicating with the public is important, but it's not all he does. He evidently decided that to abandon all his other duties to become a full-time communicator and Trump critic, while it would have pleased a lot of pundits, was not the best use of his time.

Now the doctor's bet has paid off, and he will play a crucial role in distributing the vaccine and conquering the pandemic, under a sane presidential administration. We all owe him a debt of gratitude for that.

More broadly, the case of Dr. Fauci illustrates the damage done not just by Trump, but by decades of Republican attacks on the very concept of government. One of its worst effects has been the partisan politicization of federal bureaucracies that otherwise would have been perceived as above the fray. Now even liberal commentators — who, in theory, value attributes like competence and experience — get caught up in seeing federal officials like Fauci primarily through a political lens, and underrate the important aspects of their job, such as managing large agencies and executing public policy, that exist outside the world of cable-news mudslinging.

One of the biggest jobs the Biden administration will face is that of restoring the massive federal bureaucracy to its real job, which is to serve the public, rather than serving a deranged president's ego or the anti-government ideology of the right. A big part of that will be allowing people like Dr. Fauci to return to doing what they do best, instead of asking them to represent a political agenda. Perhaps the biggest gift that Joe Biden can give Tony Fauci — and by extension, the rest of us who need his expertise — is to let him focus on his actual job, which is to protect the American public from dangerous disease.