McConnell has been reticent to work with Democrats on any kind of spending bill; he may be turning about 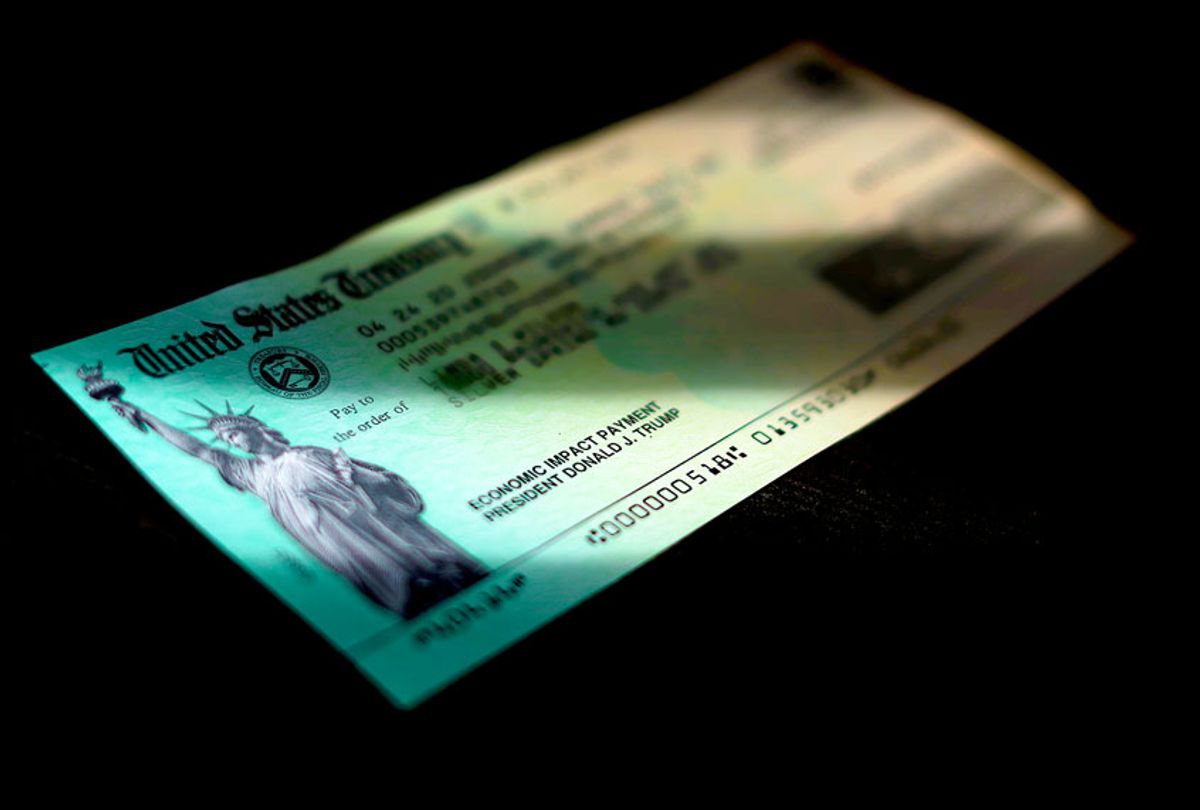 U.S. President Donald Trump's name appears on the coronavirus economic assistance checks that were sent to citizens across the country April 29, 2020 in Washington, DC. The initial 88 million payments totaling nearly $158 billion were sent by the Treasury Department last week as most of the country remains under stay-at-home orders due to the COVID-19 pandemic. (Chip Somodevilla/Getty Images)
--

House Speaker Nancy Pelosi, D-Calif., announced on Friday that Senate Majority Leader Mitch McConnell, R-Ky., had agreed to combine this year's annual omnibus spending bill with a coronavirus relief package, offering hope that stimulus for Americans economically suffering during the pandemic may be on its way.

McConnell, who has not talked with Pelosi in weeks about the possibility of moving another stimulus bill, was apparently motivated to do so after a $908 billion stimulus proposal was proposed by a bipartisan coalition of centrist Democratic and Republican senators earlier this week. One day after the bill was first unveiled on Tuesday, Pelosi and Senate Minority Leader Chuck Schumer, D-N.Y., released a joint statement saying they supported using that measure as a starting point for bipartisan talks on ultimately getting relief passed, and urged McConnell to do so as well. By Thursday a growing number of Republicans also said they would be open to beginning negotiations around the relief package, adding further pressure to McConnell. The Senate Minority Leader had previously supported a much smaller bill and indicated he was not flexible about it.

"There is momentum — there is momentum with the action that the senators and House members in a bipartisan way have taken," Pelosi explained on Friday. "The tone of our conversations is one that is indicative of the decision to get the job done." She also told reporters that she is hoping for "a big, strong vote" behind any relief package that is passed.

Not all of the news is good. There are a lot of details that Democrats and Republicans will have to work out before any final relief measure is passed, and government funding runs out next week, Congress may need to pass a brief stopgap spending bill in order to buy themselves enough time to develop an omnibus spending bill and coronavirus relief package that can pass both chambers of Congress.

The $908 billion proposal includes four months of unemployment benefits amounting to $300 a week, $160 billion in funding for state and local governments, help for students paying off their loans and assistance for small businesses, health care facilities and schools. The bill did not include any consensus on issues like liability protections for businesses and other organizations in the event that people who do to their physical locations get infected.

"Our action to provide emergency relief is needed now more than ever before. The people need to know we are not going to leave until we get something accomplished," one of the bipartisan bill's co-sponsors, Democratic Sen. Joe Manchin III of West Virginia, explained when announcing it. "I'm committed to seeing this through."

Notably, the new stimulus proposal does not include direct cash payments to every taxpayer like the CARES Act passed in March, although President-elect Joe Biden said on Friday that he would prefer to include those payments and added "I understand that may be still in play." It is also much smaller than that original bill more generally. The CARES Act, which cost more than $2 trillion, included $1,200 payments to taxpayers making less than $75,000 each year and gradually reduced the amount for people in higher tax brackets before being entirely eliminated for families who made more than $99,000 each year. It also includes $500 for every child in the household of eligible families, expanded the eligibility criteria for unemployment relief, extended benefits by 13 weeks, increased maximum unemployment benefits by $600 per week, provided $500 billion in relief for corporations, gave $350 billion in relief to small businesses and allocated $100 billion in assistance for hospitals.