Biden's economic adviser picks are underwhelming the left, to say the least

Biden chooses a team that is sympathetic to corporations, many of whom have questionable ties to finance 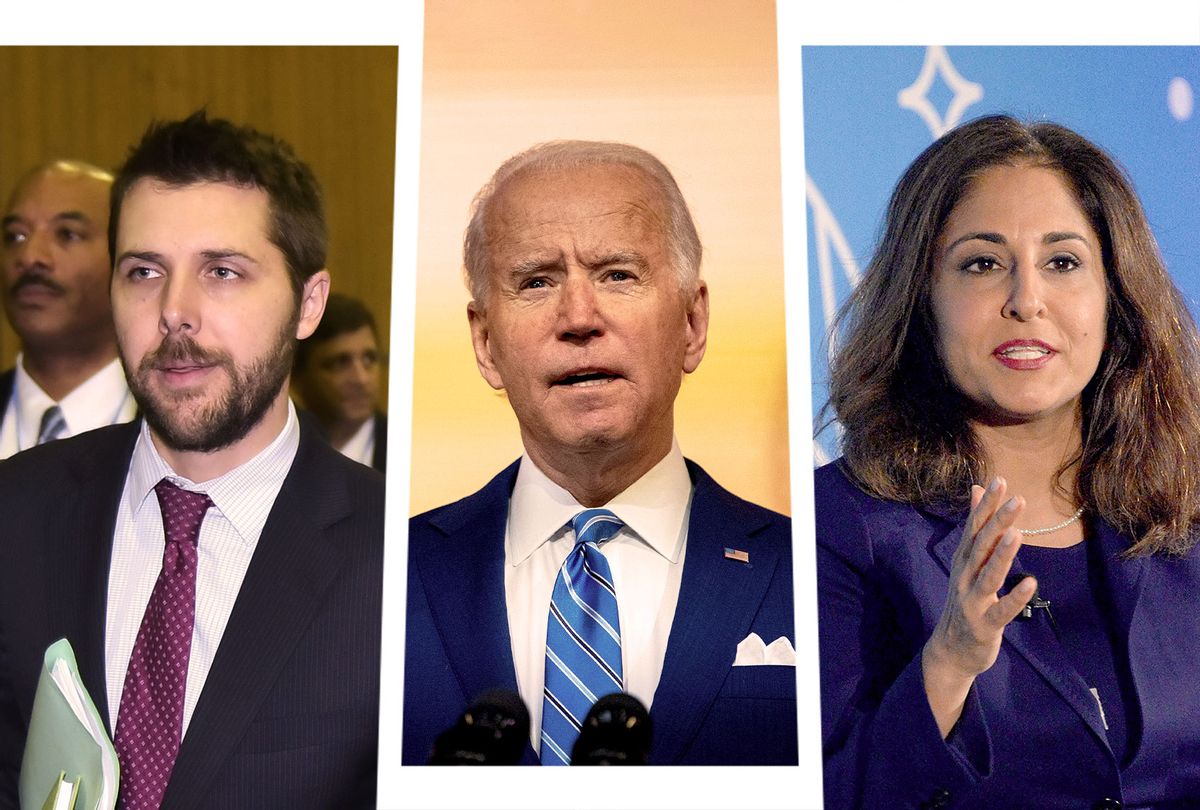 President-elect Joe Biden has started to assemble his economic team, which will face the daunting task of trying to pull America out of a recession in which what mild semi-recovery that has occurred has primarily benefited the wealthy. Many progressives are concerned that his early picks will not rise to the occasion.

One subject of left-wing concern is Brian Deese, Biden's pick for National Economic Council (NEC) director who infamously urged President Barack Obama to curb government spending instead of providing increased assistance to the working class and poor adequately when he served as Obama's deputy director of NEC during the early months of the Great Recession, according to Politico. As the Action Center on Race and the Economy, a self-described "campaign hub for organizations working at the intersection of racial justice and Wall Street accountability," tweeted, Deese used to support fracking and fossil fuel production, opposes proposals that would have increased oversight over political spending and has financed racist institutions like police foundations. Likewise, Kate Aronoff of The New Republic wrote a scathing op-ed criticizing Deese for preaching "fiscal discipline" during the Great Recession, supporting the Trans-Pacific Partnership and defending drilling in the Arctic. The new progressive group No Corporate Cabinet also pointed to Deese's advocacy of cutting social programs, defending fracking and increasing the production of fossil fuels.

Aronoff elaborated on those views in an interview with Amy Goodman on Democracy Now!, in which she pointed out the connections between Deese and Wally Adeyemo, Biden's deputy treasury secretary nominee, and the finance firm BlackRock.

"BlackRock has very smartly cultivated its reputation as a sort of 'good guy' on Wall Street," Aronoff explained. "They're not an investment bank. They just handle the money of retirees. They're an asset manager. And they have very cannily cultivated this reputation and an enormous amount of unaccountable power. Time after time, they have sought to shirk regulation and — in the last year especially, and while Brian Deese has been there — really greenwashed their image, so put out this sort of idea that BlackRock is taking the climate crisis seriously, all the while continuing to invest in fossil fuels at an enormous rate."

In addition to opposing the kind of generous stimulus spending that progressives believed was necessary to fully recover during that economic crisis, Deese also supported large-scale financial deregulation and cutting corporate tax rates that suggested he was sympathetic to the corporate sector.

"The appointment at the NEC [Brian Deese] and the choice for deputy treasury secretary [Wally Adeyemo] are a little troubling," Eileen Appelbaum, co-director of the progressive think tank the Center for Economic and Policy Research, told Esquire. Applebaum noted they both had former positions at BlackRock, a global investment management firm, with Adeyemo serving as a former chief of staff to BlackRock's chief executive and Deese serving as the Global Head of Sustainable Investing. "BlackRock... has oligopolistic power in asset management, there's no question about it," Appelbaum said. "Having two people from Blackrock in a position to make decisions like that—whether it should be [too big to fail] or not—is troubling."

In picking Deese, Biden is deliberately connecting his administration with Obama's, a president whose administration he repeatedly promised to emulate during the 2020 Democratic presidential primaries. Obama praised Deese shortly before the end of his presidency by claiming that "he engineered the Paris Agreement, the [Hydrofluorocarbons] Agreement, the Aviation Agreement, may have helped save the planet, and he's just doing it while he's got two babies at home, and could not be a better person." Deese has also been defended by supporters who point to his role in organizing the government bailout of the American automobile industry.

Many left-critics were similarly dismayed by Biden's choice to tap Neera Tanden to run the Office of Management and Budget at the White House. As president and CEO of the center-left think tank Center for American Progress (CAP) since 2011, Tanden regularly hobnobbed with wealthy business leaders from Wall Street, Silicon Valley and elsewhere in corporate America in order fundraise for the think tank, according to The Washington Post. The Post estimates that between 2014 and 2019 CAP received no less than $33 million in donations from the financial sector and between $4.9 million and $13 million from Silicon Valley companies and foundations. It has also received donations from Walmart and defense contractor Northrop Grumman. CAP argues that less than 2.5 percent of its funding from 2019 came from corporate sources, although that figure does not include money from business leaders or foundations connected to institutions like Wall Street.

Tanden is infamous for her tense relationship with supporters of Sen. Bernie Sanders, the Vermont independent and democratic socialist who was Biden's chief challenger in the 2020 Democratic presidential primaries. Notable incidents involving Tanden include referring to Sanders supporters at ThinkProgress (which is affiliated with CAP) as "crazy leftists," having public feuds with the Sanders wing of the Democratic Party, laying off the organization's unionized newsroom (Tanden claims the unionizing had nothing to do with it) and, according to Sanders himself in a 2019 letter, "maligning my staff and supporters and belittling progressive ideas."

The underlying dilemma is that, while leftists want to restructure the economy so that lower income Americans will do better even if that means the wealthy lose some of their status, many Democrats want stimulus measures that are less focused in scope.

Robert Reich, the former Labor Secretary under President Bill Clinton, wrote in The Guardian on Sunday that there is a difference between stimulus measures meant to revive the economy (which many corporate executives support, as this would help them as well as ordinary Americans) and bringing about long-term structural changes in the economy, such as those necessary to address growing income inequality. When Sanders ran for president in 2020, for example, he pushed strengthening labor rights, guaranteeing universal single-payer health care, providing free college education, raising the minimum wage and implementing a Green New Deal.

"But [JP Morgan chief executive] Dimon and his ilk will doubtless continue to fight any encroachments on their power and wealth," Reich wrote. "They will battle antitrust enforcement against their giant corporations, including Dimon's 'too big to fail' bank. They're dead set against stronger unions and will resist attempts to put workers on their boards."

Because Biden has made it clear that he does not want to be viewed as alarming to Wall Street, Reich wrote that it is a problem that people like Dimon "will oppose substantial tax hikes to finance trillions of dollars of spending on education, infrastructure and a Green New Deal. And they don't want campaign finance reforms or any other measures that would dampen the influence of big money in politics. Even if the Senate flips to the Democrats on 5 January, therefore, these three impediments may discourage Biden from tackling structural inequality."