Make no mistake, Republicans would steal this election for Trump — if only fewer voters had stood up to him 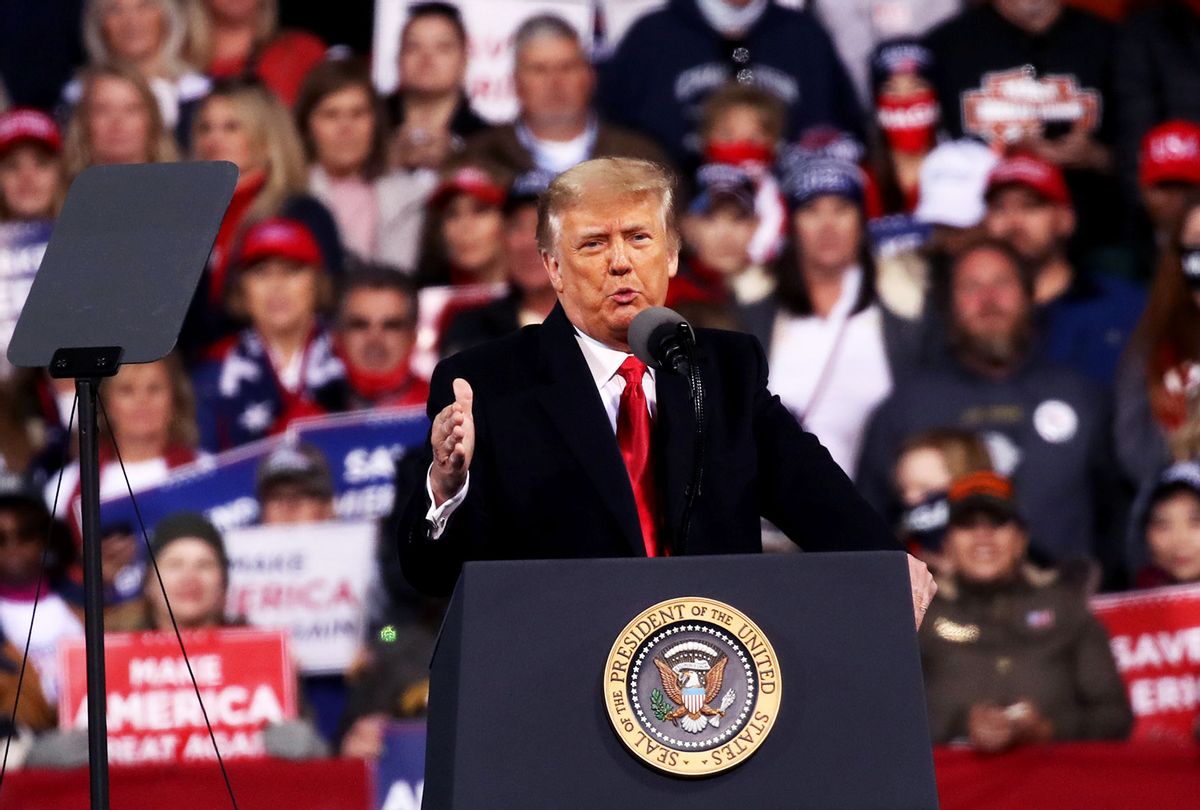 Donald Trump is still trying to steal the election from Joe Biden, and while he is still going to fail, the terrifying reality is that a few cracks in the wall protecting democracy have started to appear.

While many pundits continue to minimize this entire situation, sneering at people who use phrases like "attempted coup," the grim reality of our current moment is that Trump got far closer to succeeding than many people would like to admit. He's only stopped now by the fact that too many people voted against him in so many different parts of America. Every indication suggests that if it were up to Republicans, who still hold a disproportionate amount of power, Trump might very well have been illegally installed for a second term in office.

The Washington Post reported that Trump reached out to Bryan Cutler, speaker of the Pennsylvania House of Representatives, on Monday in an effort to get Cutler to invalidate the state's presidential election results, citing "all these issues in Philadelphia." This is the third Republican state leader Trump has reached out to with this request — he's also contacted Georgia's Gov. Brian Kemp and brought Michigan legislators to the White House — and the third strikeout.

So why isn't Trump getting what he asked for? Much of the coverage of the recalcitrant Republican leaders portrays these officials as brave defenders of democracy, or at least people who have had enough of Trump's corruption and are drawing a line.

It's evident that what's holding Republicans back is not honor or decency, but a lack of options. There simply aren't legal processes to pull off what Trump wants, no matter what Newsmax or OANN might say, and state leaders know it. They are saying no to Trump not because they want to, but because, legally, they have to. Witness, for instance, what the Pennsylvania House speaker's spokesperson told the New York Times about the discussion with Trump: "Cutler made it very clear what power the legislature has and does not have."

Missing, of course, is any mention of the importance of democracy or a robust defense of the right of Pennsylvanians to vote. Cutler sympathizes with Trump's desire to overturn a free and fair election, which is why he signed a letter to the state's congressional delegation asking them to object to the state's electoral votes. He just doesn't have the power to vacate the election results.

Georgia's Kemp issued a similar response, noting how much effort he's put into "auditing" the vote, but underlining that he's hamstrung from doing any more. Again, this is not a high-minded defense of the right of Georgians to have their votes counted. On the contrary, Kemp has a long history of being an eager vote suppressor, and that's likely why he's governor today. He's just hit the limit of his powers to deprive voters of their right to be heard. The Georgia secretary of state, Brad Raffensperger, has received widespread praise for his "courage" in standing up to Trump's coup effort. This is further nonsense. While Raffensperger has been more outspoken in defense of the election results than other Trump-toadying politicians, he too is acting more out of legal necessity than a desire to defend democracy.

Raffensperger has a long history of supporting voter suppression. Indeed, he's exploiting the current situation by conflating Trump's attacks on the election with the fight by former Democratic gubernatorial candidate Stacey Abrams to ensure free and fair elections, on the grounds that both are losers who are critical of Georgia's election process. Of course, the two couldn't be more different, starting with the fact that Abrams is telling the truth about voter suppression and Trump is lying about voter fraud. But the larger point here is that Raffensperger's instinct is to use Trump's coup as leverage to strip away more voting rights.

Raffensperger is no hero. He's just legally constricted from being a villain in the particular case of Trump's coup.

Indeed, there was surprising enthusiasm for Trump's efforts in the days after the election from state-level Republicans, which is why 10 Republican state attorneys general filed an amicus brief on Nov. 10 demanding that the Supreme Court gut a Pennsylvania law giving mail-in ballots mailed by Election Day up to three days to arrive. What's happened since then, however, is mounting evidence that Democratic voters, egged on by the party's calls to vote early, outwitted Republican efforts to steal the election through such legal maneuvers. For instance, only 10,000 votes arrived in that three-day post-election window in Pennsylvania, so even if Trump's lawsuit had been successful, it wouldn't have changed the results of the election in that state.

Even in the face of all this, some state-level Republicans are still looking for any angle they can find to overturn the election. Texas Attorney General Ken Paxton filed a lawsuit Tuesday demanding that the Supreme Court prevent state delegations from Georgia, Michigan, Pennsylvania and Wisconsin from voting in the Electoral College. Notably, all four states have been subject to accusations from Trump that the votes from large, racially diverse cities are specifically illegitimate.

On the federal level, the same dynamic is in play.

The Washington Post surveyed 249 Republicans in Congress about Trump's attempts to steal the election, and the numbers are disheartening, to say the least. Only 27 GOP congressional members openly opposed the coup by acknowledging that Biden had won the presidential election. Two members said publicly they believed Trump had won, and the rest — 220 duly elected Republican members of Congress — wouldn't answer the question either way.

Saying nothing is tacit support. These members would be perfectly willing to go along with Trump stealing the election if he could pull it off. They just aren't getting on board publicly because they know it won't work. Even if some congressional Republicans object to the state electors — and every sign shows that a handful will — Democrats control the House, so nothing will likely come of it. But this silence speaks volumes about who would happily collaborate with Trump's coup if they had any confidence it would work.

Of course, not all of them are silent. A group of House Republicans, led by Jim Jordan of Ohio and Mo Brooks of Alabama, are publicly calling on Trump to continue fighting even after the Electoral College legally certifies the election for Biden next week. There has been no rebuke from the Republican leadership to these extremists, not even from leaders who hail from the states where Trump is trying to have legal votes thrown out. The Republican stance, on both the state and federal level, is clear: They wish they could help Trump overturn the election, but they just don't see a path forward. They were prepared to abuse their power as far as they could to help him, and have hit the wall

Unfortunately for Trump, time has run out. Tuesday is the deadline for states to certify their results, and next Monday the Electoral College will finally make Biden's win official. The results are clear, not because Republican leaders have any integrity, but because voters showed up in large enough numbers to render all these shenanigans effectively moot. Trump will leave office on Jan. 20, and the only people who deserve credit for that are Democratic voters and organizers, who made sure Biden's win was big enough that it couldn't be stolen away.