As Biden prepares to take over, media normalizes Republican obstruction 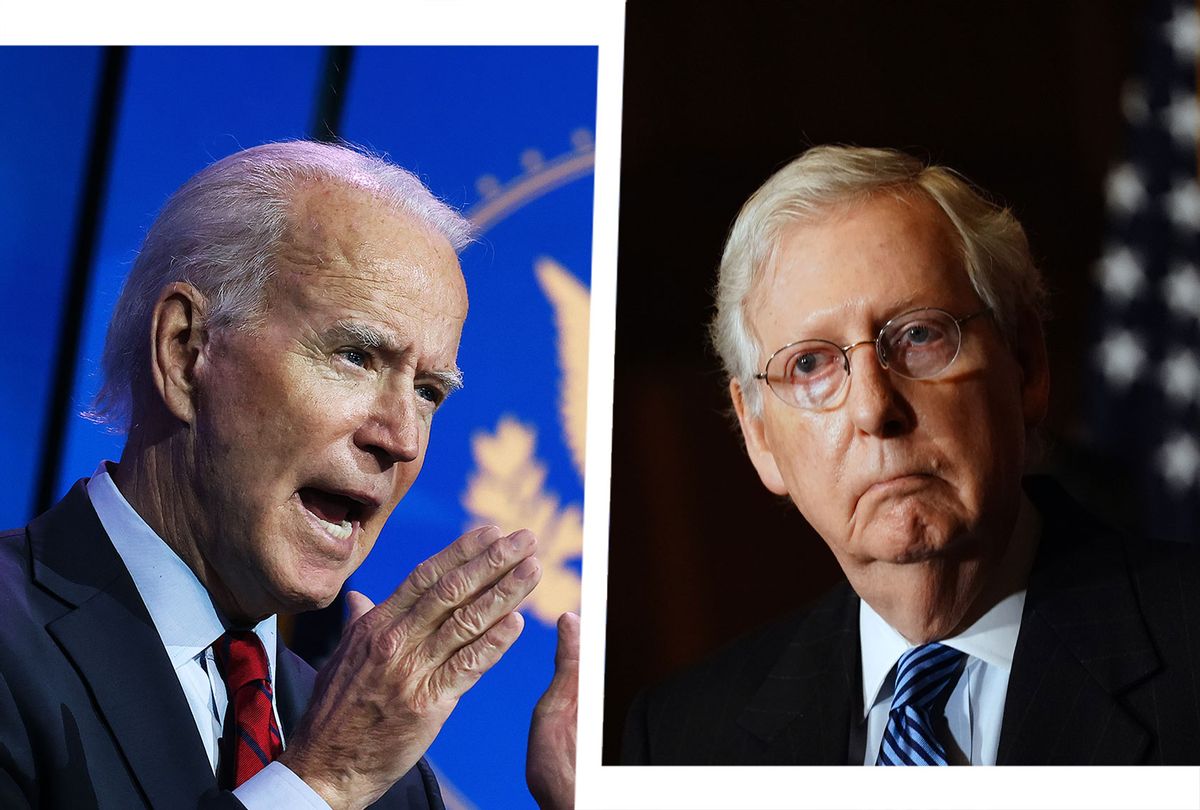 There has never been a need for a more radical departure in governance in this country than there is right now.

But conventional media coverage is already circumscribing Joe Biden's presidency by insistently positing extreme Republican intransigence and treating it as normal and inevitable — even before it has manifested itself.

Political reporters should be demarcating the enormous challenges ahead. And they should be prepared to call out in alarm when they identify gratuitous obstructionism — instead of preemptively assuming it will be ubiquitous, and in that way making it seem innocuous, and barely even newsworthy, when it happens.

Similarly, they should identify it as a symptom of an unhinged, reality-defying consensus, rather than of everyday partisan politics. You got a hint of that in the Washington Post's recent survey (bravo!) which found that only 12 of the 52 current Senate Republicans are willing to publicly acknowledge Biden's victory.

What would actually be "normal" right now would be for the president-elect to be able to pick his governing team, and for the opposition party to object only to nominees who are wildly unqualified or radically out of the mainstream.

But what the political press has instead normalized is the Republican Party's Trump-addled take-no-prisoners partisanship. Heck, Republican leaders don't even need to threaten to block nominees. The elite media simply assumes they will — baking Republican intransigence into their narratives, and putting the onus on Biden to somehow avoid it.

Granted, it's not unreasonable to anticipate that presumptive Senate Majority Leader Mitch McConnell will do his utmost to obstruct Biden, and that many Republican senators will go along.

And granted, Biden to some extent seems to have internalized the inevitability of Republican obstruction himself — and is largely sticking to tried-and-true Democratic Party stalwarts rather than firebrands.

But it's quite possible that some of McConnell's caucus will refuse to go along with extreme partisan obstruction. Even if Republicans hold on to their Senate majority, it will be a small one.

So when and if Republicans block reasonable Biden nominees, that should elicit articles full of outrage, not knowing smirks and yawns.

As it looks now, however, you should probably be prepared for the smirks and yawns.

As soon as Biden clinched his election victory, political reporters started warning him that he shouldn't pick people who might inspire Republicans' wrath.

Mike DeBonis wrote in the Washington Post that centrist Republicans have "effective veto power over his administration's staffing" — with the presumption that they would use it.

One of the funniest headlines was in the The Hill on Nov. 13: GOP senators say Warren nomination would divide Republicans — as if dividing Republicans in a successful confirmation fight should trouble Biden. Alexander Bolton reported:

Senate Republicans are warning that President-elect Joe Biden would spark "a fight" if he were to nominate Sen. Elizabeth Warren (D-Mass.), Sen. Bernie Sanders (I-Vt.) or former national security adviser Susan Rice to his Cabinet.

Bolton acknowledged that several Republicans could conceivably peel off from the caucus — and even quoted right-wing Sen. Ron Johnson of Wisconsin saying "I give a great deal of latitude to the president" on nominations — before dropping the boom: an unstated threat from McConnell.

Only when "moderates," such as director of national intelligence nominee and former Obama drone queen Avril D. Haines — are announced, do reporters such as Julian E. Barnes of the New York Times write that they are "likely to win confirmation in a sharply divided Senate"; the implication being that someone more progressive would lose.

Lisa Mascaro's recent story for the Associated Press correctly acknowledged "the political reality of a narrowly controlled Senate that will leave the new Democratic administration dependent on rival Republicans to get anything done."

But before you know it, she was describing inexcusable conduct as if it were just normal politics, writing that "Republicans are swiftly signaling that they're eager to set the terms of debate and exact a price for their votes."

She described the GOP's plight quite sympathetically, as "suspended between an outgoing president it needs to keep close — Trump can still make or break careers with a single tweet — and the new one they are unsure how to approach."

Patricia Zengerle of Reuters reported on Nov. 24 that "Republican members of the U.S. Senate fired warning shots to President-elect Joe Biden that they may be prepared to stand in the way of his Cabinet appointments, despite the long-held tradition of a new president having the right to choose who will run government agencies."

But the comments from the members were critiques, not threats. It's Zengerle who assumed they would metastasize over time.

Several days later, when some far-right Republicans blustered about Biden's most controversial selection yet – the outspoken Neera Tanden as director of the Office of Management and Budget — Reuters' Andrea Shalal stenographically quoted a spokesman for Sen. John Cornyn, R-Texas, saying Tanden had "zero chance" of being confirmed. There was no context or pushback.

Even articles like this one by Lisa Mascaro and Matthew Daly of the Associated Press — which is all about how McConnell and the GOP chairs of key committees have remained silent about the confirmation process — assume that Republicans will fight.

"Even if McConnell is willing to accept Biden's choices for top Cabinet positions, the Republican leader is not expected to allow easy Senate confirmation without a political price," they wrote. "He is known for driving hard bargains even on routine business, and Republicans are eager to level payback on Democrats for running out the clock with procedural hurdles to Trump's nominees."

The reporters normalize extraordinary intransigence, writing for instance that Alejandro Mayorkas, a Cuban-American former federal prosecutor who would be the first immigrant to serve as secretary of homeland security, "faces the potentially toughest path to confirmation," and quoting an anonymous Republican aide who says Democrats "have got a lot of work to do" to persuade Republicans to support him.

Reporters are even reconciled to parts of the government remaining effectively neutered in the post-Trump era because of Republicans in the Senate. The Washington Post's Cat Zakrzewski wrote, "It's looking increasingly likely that the incoming Biden administration will face a deadlocked Federal Communications Commission" because "it could be difficult for Biden to nominate a tie-breaking Democratic commissioner to fill the fifth slot."

It's so much dog-bites-man with these people that the big news is when Republicans say they won't throw a fit about some potential Biden nominee.

And all of this is happening despite the fact that reporters who actually talk to Republican senators get the impression they'll go along.

Burgess Everett, a Politico congressional correspondent reported this on Nov. 20:

Senate Republicans are signaling they will confirm most of President-elect Joe Biden's Cabinet picks in January — a rare bright spot for a White House that may clash with a GOP majority for years to come.

Many Republicans won't even publicly concede that Biden will be the next president while President Donald Trump fights to overturn the election results. But a critical mass of GOP senators said in interviews that Biden has the right to his Cabinet, indicating he may be able to staff his administration largely to his liking.

Instead of proactively giving them cover for their dirty work, journalists should mock Republicans who criticize Biden's nominees for their blatant hypocrisy, which will surely only grow. Like this:

More of that, please.