As we head into the season of holiday feasts and leftovers, bypass the usual pot pie crust & make biscuits instead 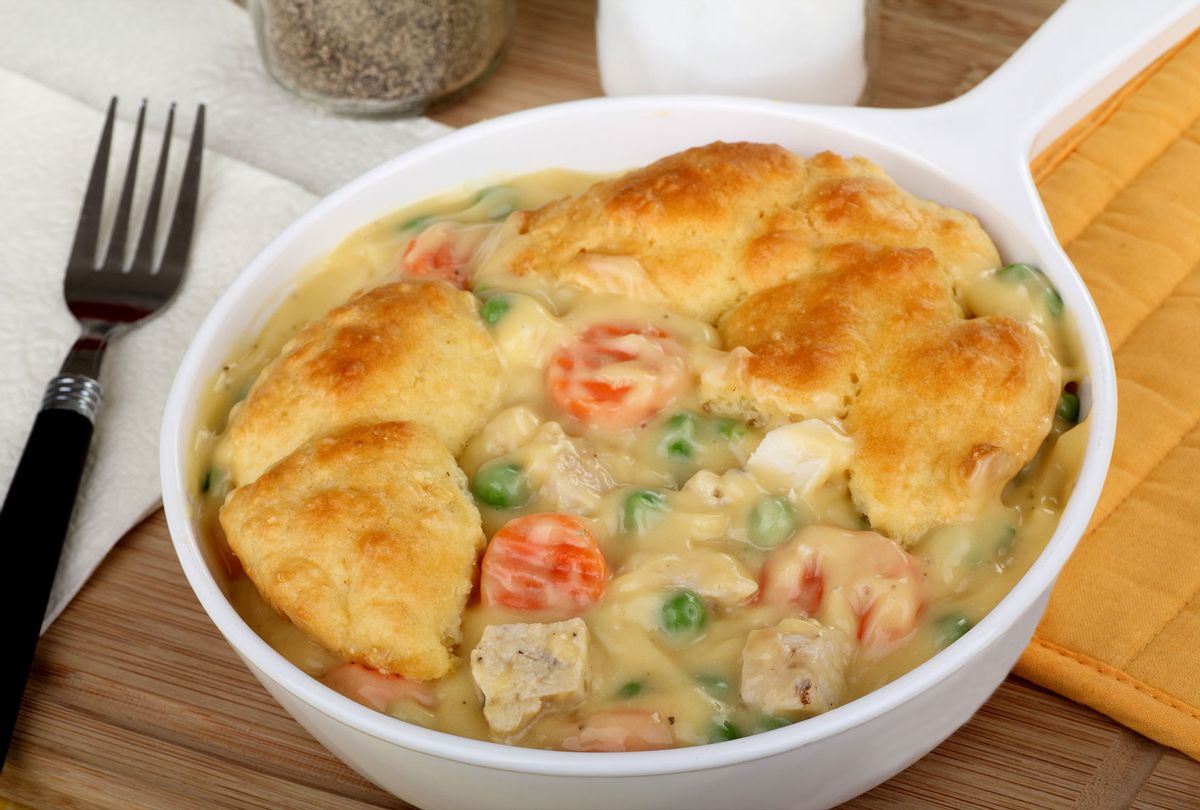 On Thanksgiving night my husband was incredibly diplomatic about my turkey fail. And fail I did – my word, not his – a rebuke of my highest efforts. I'd brined the meat and seasoned it on top of that. I'd tented the turkey in foil as I have for years, but this time I didn't notice a gap in my joined edges, which allowed all the precious basting steam to escape. By the time I checked on the bird it was . . . thoroughly cooked.

"The dark meat's terrific," he cagily offered when I asked about the breast (his favorite part, the reason for the season!). When I asked again he offered after a pause, in the kindest voice, "This is why gravy was invented." Like I said, that was day one.

Twenty-four hours later he was cracking jokes about building a monument to the leathery meat and the despair it represented. Then he offered the inspirational flash that saved that weekend's leftovers. "Why don't we toss it into a pot pie?" Being an overachiever, I viewed this turkey rescue mission as a chance to save face.  "How do you feel about a biscuit crust?

A good pot pie recipe can be the home cook's best friend in situations like this, and an artful salvation to dashed holiday ambitions. Better yet, making one can be as simple or as complicated as the chef wants it to be. Nevertheless until recently the pot pie got a terrible rap for being, horror of horrors, basic.

Since the mid-20th century and the rise of mass manufactured convenient foods, the pot pie has been synonymous with those frozen single-serving pucks nestled in aluminum pans. Back in the day they were created to be an easy meal option that sits somewhere in the middle of the spectrum between made-from-scratch and a frozen pizza, giving exhausted parents a night off from cooking while meeting the requirements of a balanced meal. Meat, vegetables and a starch coexisting in one neat package that can be baked from its frigid state and also happens to be a single-serving pie. What could be better?

A homemade pie, that's what. The downside of these mass-produced versions is that they weren't particularly pleasing to adult palates. They also have a reputation for being packed with sodium and fat.

With any homemade dish the preparer can control levels of unhealthiness and better still, how the pie tastes. That part depends on the cook's whims, and there are countless methods and flavors to draw upon. This savory pastry has been enjoyed in cultures around the world and in various forms since ancient times, and it can be molded to suit royalty or ravenous workers collapsing at the end of a taxing day.

Whether fancied up or entirely utilitarian, made with two crusts or one, or created with any variety of ingredients, a pot pie is a decadent, nourishing creation. A veritable galaxy of recipes exist for people to choose from.

Reading a few of them may lead a person to believe that pulling one together from scratch or something close to it is a complex undertaking. Again: only if you want it to be.

Take this version as an example. For the filling I worked off of a recipe from a 2007 issue of Everyday Food intended as a lighter version of the classic pot pie recipe. It uses low-fat milk and flavors the sauce in part with lemon juice, two ingredients used as meat tenderizers – better dry turkey rescue agents than gravy.

The publication's original recipe uses six sheets of phyllo dough for the top crust, stacked two at a time and brushed or sprayed with olive oil between layers, reducing the calorie count and eliminating any prep time that might otherwise be devoted to making a pie crust.

Like the phyllo dough, you can easily purchase pie crusts from the store. Similarly if you want to make the biscuit top without the work, use a box of Bisquick or one of those cannister tubes of ready-bake biscuit dough.

Any of those options can yield a mostly homemade pot pie in under 40 minutes or less if, like me, you have some leftover meat to repurpose. That makes a single-crust homemade pot pie a doable weeknight dinner option, especially if you have second-day rotisserie chicken to play with.

Those willing to devote a little more time to making the biscuit dough from scratch and who care less about the higher calorie count – it's 2020, live a little! –  will be rewarded by a fluffy, decadent accompaniment to the meat, carrots, sweet peas and sauce sheltered beneath.

Use any biscuit recipe you like. Salon recently published an excellent one by Kelly Fields. Drop biscuit recipes are even simpler in that you can just pour the batter on top of the filling before baking. My go-to recipe is Edna Lewis' Sunday Revival Dinner version, taken from her classic cookbook "The Taste of Country Cooking." Exactly what's needed to transform a turkey day tragedy into a leftover triumph.

(Reporter's note: If you like more lemon feel free to add more, but be careful not to overdose on it or you may break the sauce's creaminess. If you want a thicker sauce use whole milk or toss in pats of butter, a bit at a time, to thicken.)

For the biscuits (as Edna Lewis directs):