Limbaugh told his audience on Wednesday that the U.S. is "trending toward secession" 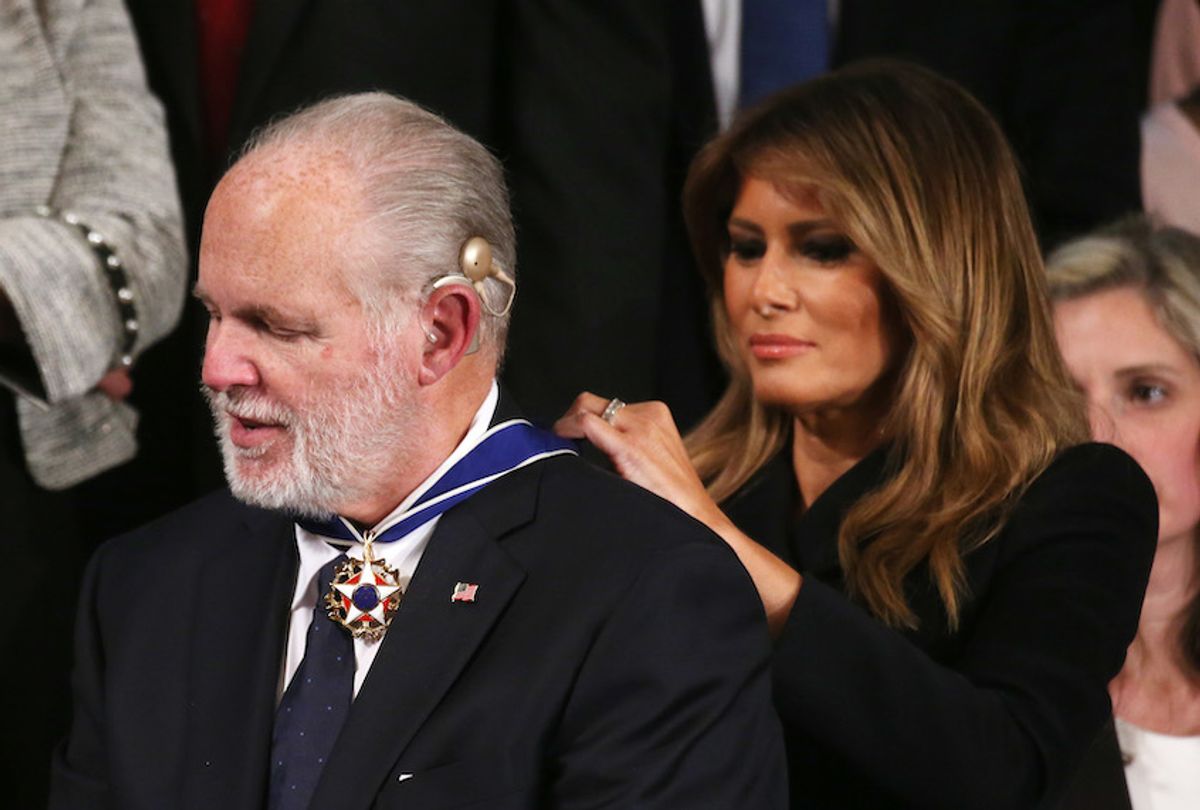 Radio personality Rush Limbaugh reacts as First Lady Melania Trump gives him the Presidential Medal of Freedom during the State of the Union address in the chamber of the U.S. House of Representatives on February 04, 2020 in Washington, DC. (Mario Tama/Getty Images)
--

During his long career in talk radio, Rush Limbaugh has thrived on us-versus-them rhetoric — claiming that that liberals and progressives have a viewpoint that is diametrically opposed to true Americanism. And during his December 9 broadcast, the far-right radio host argued that the divisions between Red America and Blue America are so huge that "secession" might be inevitable.

The 69-year-old Limbaugh told listeners, "I actually think — and I've referenced this, I've alluded to this a couple of times because I've seen others allude to this — I actually think that we're trending toward secession. I see more and more people asking what in the world do we have in common with the people who live in, say, New York? What is there that makes us believe that there is enough of us there to even have a chance at winning New York? Especially if you're talking about votes."

Limbaugh went on to say that Red America and Blue America might have reached the point where agreeing to disagree is no longer possible.

"A lot of bloggers have written extensively about how distant and separated and how much more separated our culture is becoming politically and that it can't go on this way," Limbaugh argued. "There cannot be a peaceful coexistence of two completely different theories of life, theories of government, theories of how we manage our affairs. We can't be in this dire a conflict without something giving somewhere along the way."

Although President-elect Joe Biden enjoyed a decisive win in the 2020 presidential election — winning 306 electoral votes and defeating President Donald Trump by more than 7 million in the popular vote — most Republicans in Congress have been afraid to publicly acknowledge that Biden won. They are afraid of being attacked by Trump on Twitter or slammed by Limbaugh or another far-right pundits. Yet Limbaugh claimed that "RINOs" — Republicans in Name Only — are doing a lot to prevent conservatism from prevailing in the U.S.

"I know that there's a sizable and growing sentiment for people who believe that (secession) is where we're headed, whether we want to or not — whether we want to go there or not," Limbaugh told listeners. "I myself haven't made up my mind. I still haven't given up the idea that we are the majority and that all we have to do is find a way to unite and win. And our problem is the fact that there are just so many RINOs, so many Republicans in the Washington establishment who will do anything to maintain their membership in the establishment because of the perks and the opportunities that are presented for their kids and so forth."