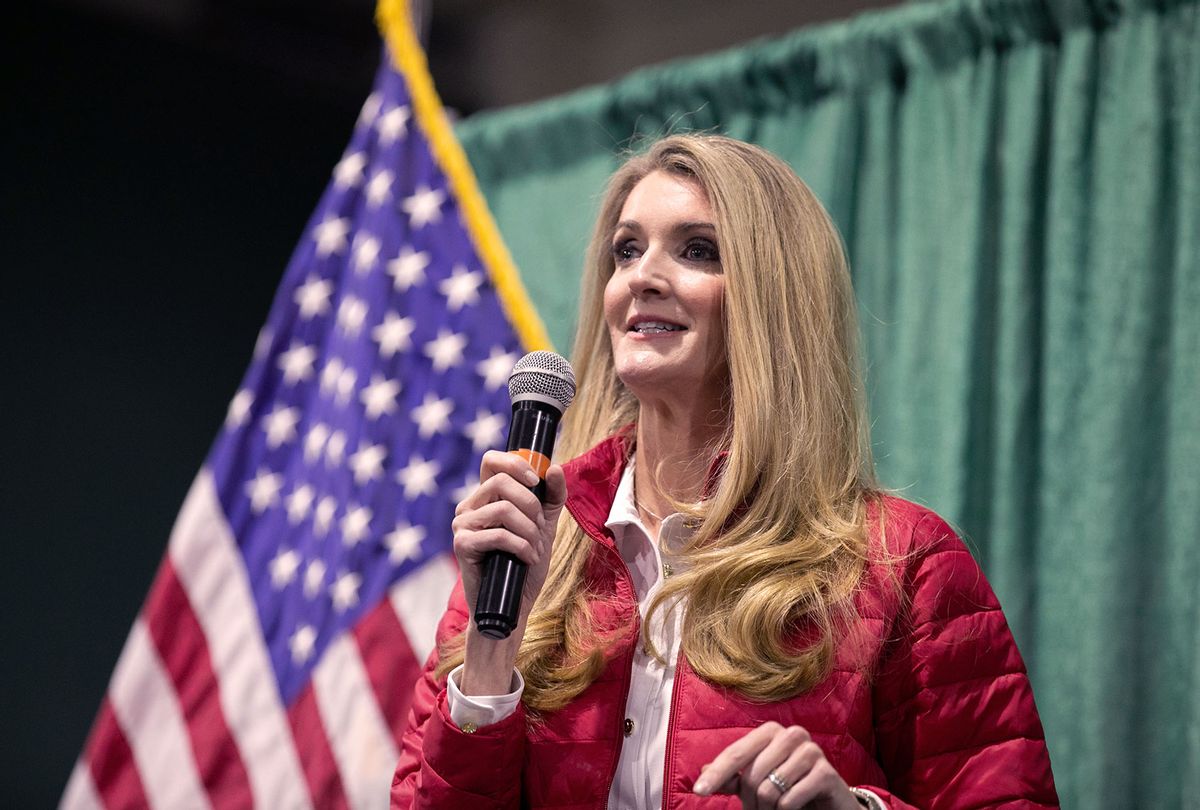 Sen. Kelly Loeffler, the unelected multimillionaire Georgia Republican facing a critical runoff election in January, says she had "no idea" that the supporter she recently posed for a selfie with is a former Ku Klux Klan leader.

"Kelly had no idea who that was, and if she had she would have kicked him out immediately because we condemn in the most vociferous terms everything that he stands for," Stephen Lawson, a Loeffler campaign spokesperson, told the Atlanta Journal-Constitution on Sunday. At a Friday campaign event, Loeffler posed for a photo with Chester Doles, a violent former Klansman with longstanding ties to neo-Nazi groups. The picture with Loeffler was captioned: "Kelly [Loeffler] and I. Save America, stop Socialism!"

While Loeffler's campaign now denies it knew about Doles background before the senator smiled for a picture by his side, the photo drew swift backlash amid the heated Senate runoff that pits Loeffler against Democratic Rev. Raphael Warnock, the Black pastor of Ebenezer Baptist, Martin Luther King Jr's old church in Atlanta. In a debate against Loeffler last week, Warnock hit the appointed senator for her record on race.

"She used her enormous privilege and power as a United States senator to pick a fight with the Black women on her team," he said. "She says she is against racism, and that racism has no place. But she welcomed the support of a QAnon conspiracy theorist, and she sat down with a white supremacist for an interview," he added, apparently in reference to Rep.-elect Marjorie Taylor Greene, R-Ga., and One American News Network host Jack Posobiec.

For his part, Doles told the Associated Press that he had "publicly renounced racism on several occasions in the past couple of years." He added that he had attended a "redemption service," where he stood "in front of an all-Black congregation and told my story and renounced all racism and asked for God's forgiveness."

A former imperial wizard for the Territorial Klans of America, a KKK chapter based out of the Eastern Shore of Maryland and Virginia, Doles told the Washington Post in a 1998 interview that he was a fifth-generation Klansman and that Nazism was "my religion."

"I definitely follow the Nazis. National Socialism is my religion," Doles said at the time. "I believe in it and I look for the Fourth Reich."

His history with white supremacism has been violent. In 1993, Doles was sentenced to prison after pleading guilty to beating a Black man nearly to death in Maryland. Doles attacked the Black man because he had been riding in a pickup truck with a white woman. He had been charged with a hate crime, but prosecutors dropped it because of a recent constitutional challenge to that law in the state.

Doles also has ties to Hammerskin Nation, which the Southern Poverty Law Center describes as the "best organized, most widely dispersed and most dangerous Skinhead group" with a "relatively sophisticated political outlook."

"Not only are we in a Race struggle, but we're in a Class struggle as well," advises one of the group's publications. "This is something the reactionary right-wingers . . . have failed to acknowledge. This is something we will continue to stress! We will continue to focus on race and economics. . . Avoid the Nationalists, Capitalists, Marxists, Left/Right, and Judeo-christian rhetoric, and labor with a Race First motto."

In 2017, Doles marched at the Unite the Right rally in Charlottesville with the Hammerskin Nation. That same year he pleaded to assault charges stemming from a barroom brawl where he had smashed a woman's head into a wall while fighting alongside the group.

Two years later, after supposedly renouncing racism, Doles created a new group in support of President Donald Trump called American Patriots USA, which has known and extensive ties to neo-Nazis and the far-right militia movement. At some point Doles was banned by Facebook, so he promotes the group on VK, a Russian online haven for white nationalists barred from American social media platforms.

Before Loeffler, multiple Republican candidates in Georgia drew fire for appearing with Doles. In the spring, Georgia state Rep. Matt Gurtler was forced to disavow connections to Doles after speaking at an event hosted by American Patriots USA. And congresswoman-elect Marjorie Taylor Greene, an adherent of the fanatical QAnon conspiracy theory, posed for a photo with Doles under an American Patriots USA banner.

The AJC reported in the spring that Greene's campaign did not respond when asked about that photo, instead calling the questions "silly and the same type of sleazy attacks the Fake News Media levels against President Trump."

However, Greene later said Doles was "not welcome at any events I attend" after having him removed from a campaign event in September.

"Yes, I asked him to be removed. He is not welcome at any events that I attend. Period," she told the AJC. "I don't know him and have no relationship with him. He's not a donor and has never worked for the campaign."

That September event also featured Loeffler. Her campaign said at the time that the senator was not aware of Doles, and did not know about the controversy that his attendance at the event would have stirred.

On Sunday, Warnock, Loeffler's Democratic rival in the upcoming runoff, cited that event when he dismissed her statement about the most recent photo.

"While Kelly Loeffler runs a campaign based on dividing and misleading Georgians, she is once again trying to distance herself from someone who is a known white supremacist and former KKK leader who nearly beat a Black man to death," Warnock spokesperson Michael Brewer told The Post in a statement. "There's no acceptable explanation for it happening once, let alone a second time."