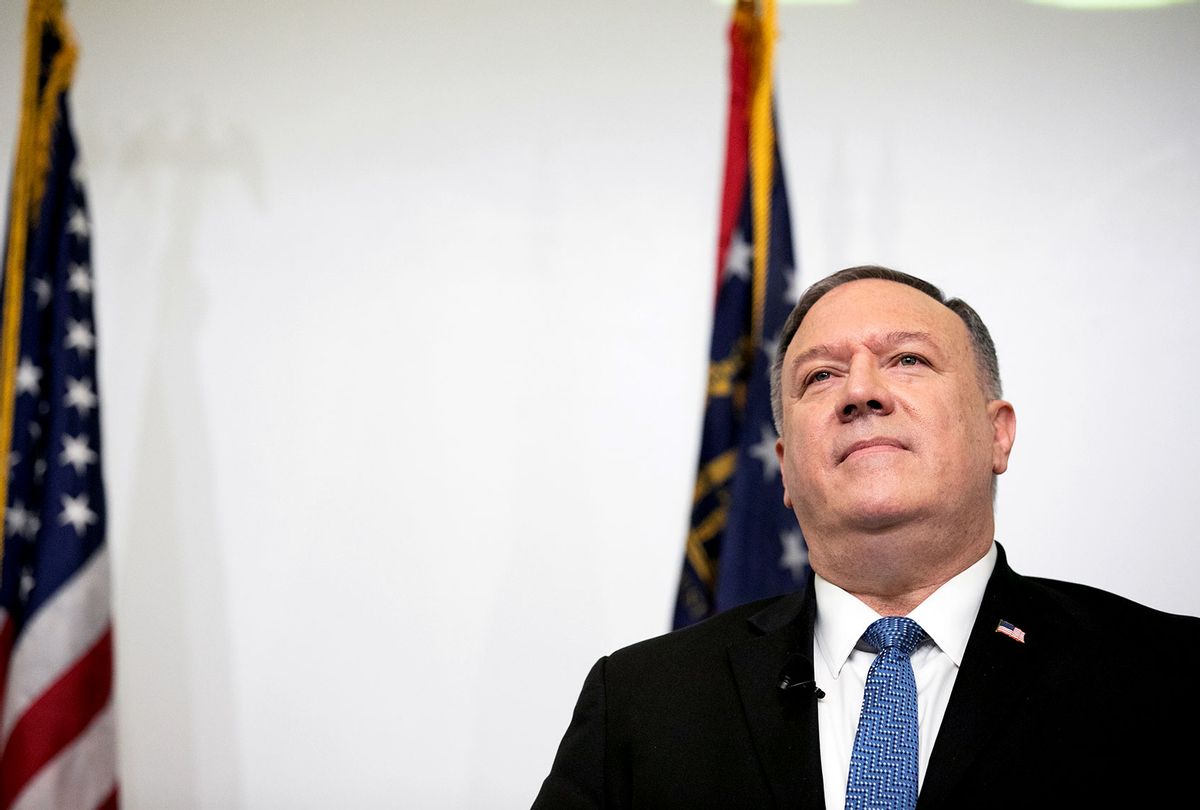 Secretary of State Mike Pompeo is in quarantine after he was exposed to someone who tested positive for the coronavirus, the State Department confirmed on Wednesday. The nation's top diplomat abruptly canceled a pair of holiday parties for diplomats where Pompeo was scheduled to speak the night before, CNN reported.

"Secretary Pompeo has been identified as having come into contact with someone who tested positive for COVID," a representative from the State Department said in a statement to CNN. "For reasons of privacy we can't identify that individual."

The spokesperson added that Pompeo tested negative for the coronavirus but will be in quarantine and is "being closely monitored" by the department's medical team in accordance with guidelines from the Centers for Disease Control and Prevention.

It is unclear when or where Pompeo was exposed but the news comes as the State Department and Trump White House have held numerous in-person holiday parties amid the coronavirus pandemic. Public health officials have warned against holding large indoor gatherings as infections in Washington DC and across the country continue to spike.

Pompeo, whose name was atop the invitations, was scheduled to speak at a Tuesday event but canceled and sent deputy Stephen Biegun instead after just 70 of the 900 invitees RSVP'd for the event, The Washington Post reported. Only "a couple dozen guests" actually showed up, according to ABC News, even though past gatherings have typically drawn crowds of 200 to 300 people.

The event featured "drinks, boxed meals and a masked Santa who walked around from table to table to chitchat with adults and children," according to the Post. Though the State Department vowed to enforce mask requirements and social distancing guidelines, many attendees removed their masks to eat and drink.

"It was a completely irresponsible party to throw," the spouse of a diplomat who declined the invitation over concerns about her children told the Post.

Lawmakers also criticized the event and urged Pompeo to cancel the gathering.

"I am concerned that these parties pose a significant health risk, not only to attendees, but to the employees and workers who must staff these events, as well as to State Department employees who may feel pressured to attend," Sen. Bob Menendez, D-N.J., said in a letter to Pompeo earlier this month.

Following the announcement of his planned quarantine, Pompeo canceled his scheduled appearance at President Donald Trump's Cabinet meeting on Wednesday and his in-person Thursday meeting with Antony Blinken,  picked by President-elect Joe Biden to succeed Pompeo at State.

The American Foreign Service Association, a nonpartisan union that represents the department's diplomats, issued a statement calling on the department to "reverse course and model responsible behavior in accordance with its own guidelines."

"The Department's leadership has urged embassies and consulates around the world to host only virtual holiday gatherings this year. It is therefore disconcerting to hear of these plans, which not only go against the Department's own guidelines but also health regulations in Washington, D.C. and the recommendations of the Centers for Disease Control and Prevention," the statement said.

The union said that although the parties are not mandatory for invitees, "the same is not true for State Department employees and contract catering workers."

"The catering workers often do not receive health insurance from their employers and must staff these events in order to keep their jobs," the statement said.

The State Department is expected to receive its first coronavirus vaccines this week, according to an internal email obtained by ABC News. A "very limited number" of vaccines will be given to a small group of critical or at-risk employees, including front-line personnel serving in Afghanistan, Iraq, and Somalia.

It's unclear whether Pompeo would get a vaccine but the outlet reported that Pompeo and his staff likely fall into one of the "critical" categories listed by the department. Acting Defense Secretary Chris Miller became the first known Cabinet secretary to receive a vaccine on Monday.

Pompeo has frequently hosted lavish parties organized in part by his wife Susan, who also frequently traveled with her husband on official business trips.

Documents obtained by the government watchdog Citizens for Responsibility and Ethics in Washington showed that Pompeo spent more than $40,000 in taxpayer dollars on the so-called "Madison Dinners" that were attended by major donors and Republican Party figures with no clear ties to the State Department or foreign affairs. Pompeo was rumored as a potential candidate for a Senate seat in Kansas at the time. Pompeo scrapped some of the dinners early in the pandemic but restarted them in the fall, according to Politico.

"Dozens of department employees who support these dinners, from security officers to catering staff who prepare the food, facilities management and protocol staff," a State Department official told the outlet, "do not have the option to work these events remotely or turn down an assignment."