Ex-cop ran repairman off the road and assaulted him with a gun in search of 750K nonexistent fake ballots, DA says 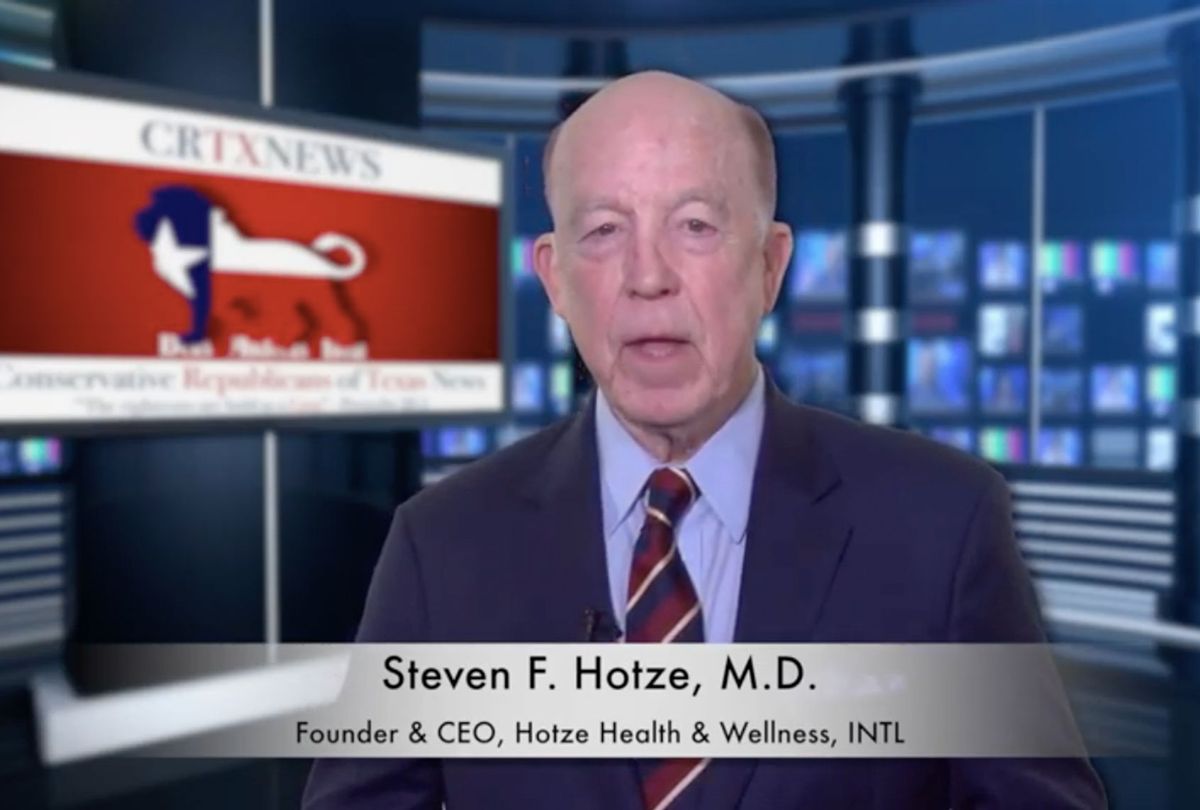 A former Houston police captain who was arrested on Tuesday after prosecutors said he assaulted an innocent man with a gun in search of nonexistent fake ballots after being hired by a prominent Republican megadonor to investigate false ballot fraud allegations.

Mark Aguirre, who reported unfounded voter fraud allegations to officials before the November election, was charged this week with aggravated assault with a deadly weapon for "running a man off the road and pointing a gun at his head" in an attempt to prove his false claims, the Harris County District Attorney's Office said in a news release.

Aguirre, 63, faces up to 20 years in prison after prosecutors said he rammed his SUV into the back of an air conditioner repairman's truck in October and then "pointed a handgun at the technician, forced him to the ground and put his knee on the man's back," an incident that prosecutors say was captured by a police officer's body camera. Aguirre then directed police to a nearby parking lot where an unidentified accomplice had taken the stolen SUV in search of fraudulent ballots.

Aguirre told police that he and other unidentified suspects set up a "command post" at a Marriott Hotel to spy on the air conditioner repairman's mobile home because he believed the man was "using Hispanic children to sign the ballots because the children's fingerprints would not appear in any databases." He suggested the scheme was funded by Facebook founder Mark Zuckerberg, according to police.

Aguirre called the Texas attorney general's office, which later led a failed legal effort to block states won by President-elect Joe Biden from casting their electoral votes, days before the incident to request help with his "investigation," according to a police affidavit obtained by KTRK. The office reported the call and another subsequent call on which Aguirre expressed that he was disappointed police would not intervene based on his baseless accusations.

Aguirre told police that he was part of a group of private citizens called "Liberty Center" who were investigating an alleged ballot fraud scheme, according to the release. He told officers he had surveilled the victim for four days because he believed he was "the mastermind of a giant fraud" and had 750,000 fraudulent ballots in his truck. Police found no ballots in the truck and arrested Aguirre.

"Aguirre's claims of election fraud were found to be baseless after thorough investigation," the DA's office said. "He crossed the line from dirty politics to commission of a violent crime and we are lucky no one was killed," Harris County District Attorney Kim Ogg said in a statement. "His alleged investigation was backward from the start – first alleging a crime had occurred and then trying to prove it happened."

Aguirre told police that he was paid $266,400 by the Liberty Center for God and County, about $211,000 of which was deposited into his bank account the day after the incident.

The Liberty Center is run by prominent Republican megadonor and activist Steven Hotze, The Texas Tribune reported. Hotze was part of a Republican group that unsuccessfully sued to have 127,000 ballots which were cast at drive-through voting locations in Harris County thrown out in what county officials described as an "un-American attempt to disenfranchise voters." A judge ultimately rejected their lawsuit but the effort successfully derailed the county's plans to have multiple drive-through voting locations on Election Day.

Hotze was also part of a Republican group that unsuccessfully sued to block Gov. Greg Abbott, a fellow Republican, from extending early voting amid the coronavirus pandemic. Aguirre said in an affidavit filed in the suit that he was part of an investigation into a "wide-ranging and fraudulent ballot harvesting scheme."

Jared Woodfill, an attorney and spokesman for Hotze, confirmed that Hotze's group hired Aguirre and about 20 private investigators to investigate fraud in the state.

Hotze launched a GoFundMe page to raise money for his "investigation" and claimed on Facebook that he had raised over $600,000 to "expose" the so-called scheme. The GoFundMe page showed that he had raised nearly $70,000 before the page was removed this week after questions from Business Insider. The company said the fundraiser violated its terms of service.

Hotze is a major Republican donor who contributes to candidates around the country. The Tribune described him as "one of the most prolific culture warriors on the right" who unsuccessfully pushed a 2017 anti-trans "bathroom bill" in Texas and left a voicemail earlier this year urging Abbott's office to shoot and kill protesters demonstrating after the death of George Floyd. Hotze also runs an anti-LGBT group called the Conservative Republicans of Texas, which was labeled a hate group by the Southern Poverty Law Center.

Aguirre worked for the Houston Police Department until he was fired in 2003 after he led a controversial botched raid that prompted the largest internal affairs investigation in the department's history.

"I think it's a political prosecution. I really do," Terry Yates, Aguirre's attorney, told KTRK. "He was working and investigating voter fraud, and there was an accident. A member of the car got out and rushed at him and that's where the confrontation took place. It's very different from what you're citing in the affidavit."

Hotze, meanwhile, touted his effort as a success.

The right-wing Republican megadonor claimed after the election that his fundraising "prevented the Democrats from carrying out their massive election fraud scheme in Harris County, and prevented them from carrying Texas for Biden. Our efforts saved Texas."

The Houston incident is the latest alleged violent incident linked to false voter fraud claims pushed by President Donald Trump and fellow Republicans despite being unable to show any evidence of fraud in court. At least four people were stabbed, numerous police officers and others were assaulted, and multiple Black churches were attacked after a Washington DC Proud Boys protest backing Trump's fictitious claims over the weekend.

Many lawmakers, including Republicans, have also faced death threats. The Michigan state legislature was shuttered this week due to "credible" threats of violence. Georgia election officials pleaded for Trump to speak out after they received a deluge of death threats but he ramped up his attacks instead.