The violence that took hold after a Proud Boy march on Saturday was “reminiscent of cross burnings," a pastor noted 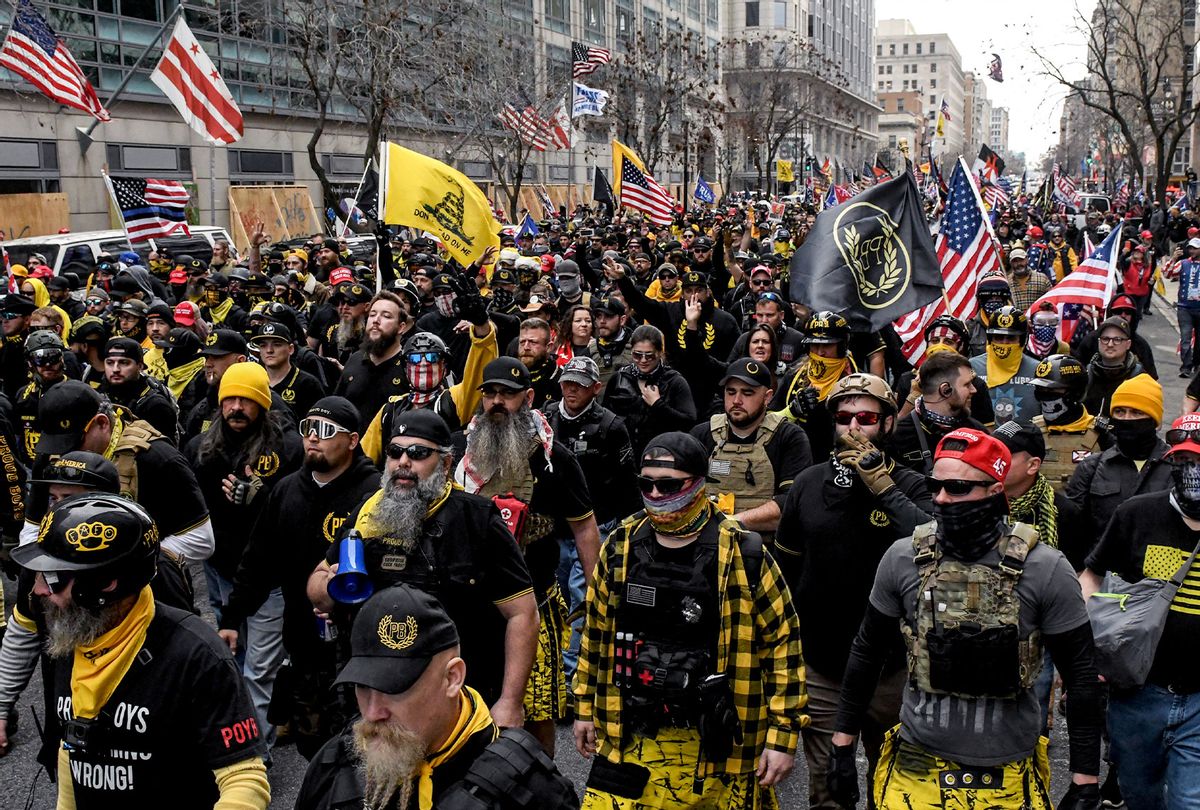 Members of the Proud Boys march towards Freedom Plaza during a protest on December 12, 2020 in Washington, DC. Thousands of protesters who refuse to accept that President-elect Joe Biden won the election are rallying ahead of the electoral college vote to make Trump's 306-to-232 loss official. (Stephanie Keith/Getty Images)
--

Footage posted to social media shows Trump supporters identified as members of the Proud Boys, a hate group according to the Southern Poverty Law Center, burning a Black Lives Matter banner torn from the Asbury United Methodist Church, one of the oldest Black churches in D.C. The men set the banner on fire while chanting "f*ck antifa!"

Rev. Dr. Lanther Mills, the senior pastor at Asbury United, said the attack was "reminiscent of cross burnings" that showed "an apparent rise in white supremacy."

"It pained me especially to see our name, Asbury, in flames," he said in a statement. "Seeing this act on video made me both indignant and determined to fight the evil that has reared its ugly head."

Mills noted that the incident has been treated differently than it would have if the men were not white.

"Sadly, we must point out that if this was a marauding group of men of color going through the city, destroying property, they would have been followed and arrested," he said. "We are especially alarmed that this violence is not being denounced at the highest levels of our nation and instead the leaders of this movement are being invited to the White House."

Mills appeared to refer to Proud Boys leader Enrique Tarrio's claim that he had been invited to the White House, where he posed for photos on Saturday. The White House denied the claim.

"He was on a public White House Christmas tour," White House spokesman Judd Deere said. "He did not have a meeting with the president, nor did the White House invite him."

The protest, which drew Tarrio and hundreds of Trump supporters, was organized in support of Trump's false claims of voter fraud that have been knocked down by dozens of courts and his own administration, including Attorney General Bill Barr.

Another video shows the group tearing down a Black Lives Matter sign from the Metropolitan African Methodist Episcopal Church in Downtown DC and burning it while chanting "Whose streets? Our streets!"

"We have not been distracted by signs, sounds, or fury for nearly two centuries," the church's pastor, William H. Lamar IV, declared on Twitter. "We worship. We liberate. We serve."

Another D.C. church, Luther Place Memorial, said in a social media post that their Black Lives Matter sign was also stolen and replaced three times since Friday. The president's supporters descended on the nation's capitol all weekend as his effort to disenfranchise millions of voters to overturn an election he lost by sizeable margins nears its end.

"A gang of Proud Boys descended on the church, harassed our leaders and took the sign away," the church's pastor, Rev. Karen Brau, said on Instagram. "This group came back a second time to intimidate us. Later Saturday night we learned we were part of an intentional targeting of houses of worship."

Police declined to say on Sunday if any arrests have been made, according to The Washington Post. "We take these offenses seriously and we are currently investigating them as possible hate crimes," D.C. police spokeswoman Alaina Gertz told the outlet.

D.C. City Councilmember-elect Janeese Lewis George drew a contrast between the lax law enforcement response to the protest and the overwhelming force of National Guardsmen and other federal agents who were dispatched to patrol the city amid Black Lives Matter protests over the summer.

"Tonight, violent white supremacist stole and burned a Black Lives Matter banner from Asbury United Methodist, the oldest Black Methodist church in DC," she tweeted. "But yet no militarized police force used against them. There are two justice systems in this country, separate and unequal."

D.C. Mayor Muriel Bowser said that her office has reached out to the churches attacked over the weekend.

"We saw forces of hate seeking to use destruction and intimidation to tear us apart," she said on Twitter. "We will not let that happen, and continue to stand together strong and United to Love."

But organizers argued that Bowser did not do enough to prevent the weekend violence.

"Yesterday, D.C. was invaded by white supremacists who were aided and protected by the Metropolitan Police Department," April Goggans, an organizer with Black Lives Matter D.C., said in a statement. "MPD allowed Proud Boys to physically attack D.C. residents who stood against white supremacy."

"They had the right to roam D.C. streets and tear down Black Lives Matter signs. That's a hate crime," added NeeNee Taylor, a co-organizer of Black Lives Matter D.C. "This is unacceptable, and BLM is demanding that police be held accountable and the city council hold Muriel Bowser accountable for allowing the Proud Boys to come back to our city and do the exact same thing they did November the 14."

The Lawyers' Committee for Civil Rights Under Law called on the Trump administration to investigate the attacks. "We call on the U.S. Department of Justice to immediately open a federal civil rights investigation under the Church Arson Prevention Act to hold accountable those responsible for these racist and violent acts," Kristen Clarke, the group's president and executive director, said in a statement.

Trump was asked to denounce the Proud Boys, who have been involved in violence around the country and the deadly 2017 "Unite the Right" rally in Charlottesville, during the presidential campaign. Instead, he urged them to "stand back and stand by."

"President Trump condemns violence in all forms and any group that expounds hate and bigotry," Deere said in a statement to the Post.

The attacks on the churches came after religious figures including Catholic archbishop Carlo Maria Vigano, and evangelical commentator Eric Metaxas held a rally to back Trump's false claims seeking to undermine the election.

Mills was undeterred by the weekend's attacks.

"We are a people of faith. As horrible and disturbing as this is for us now — it doesn't compare with the challenges and fears the men and women who started Asbury, 184 years ago, faced," he said. "So, we will move forward, undaunted in our assurance that Black Lives Matter and we are obligated to continue to shout that truth without ceasing. We are assured that our church is surrounded by God's grace and mercy."