Trump, the Proud Boys and the Kraken: Is the #EndofDemocracy just a meme — or the real thing?

Did Trump and his flunkeys "really" try to stage a coup? Is it really over? Those aren't even the right questions 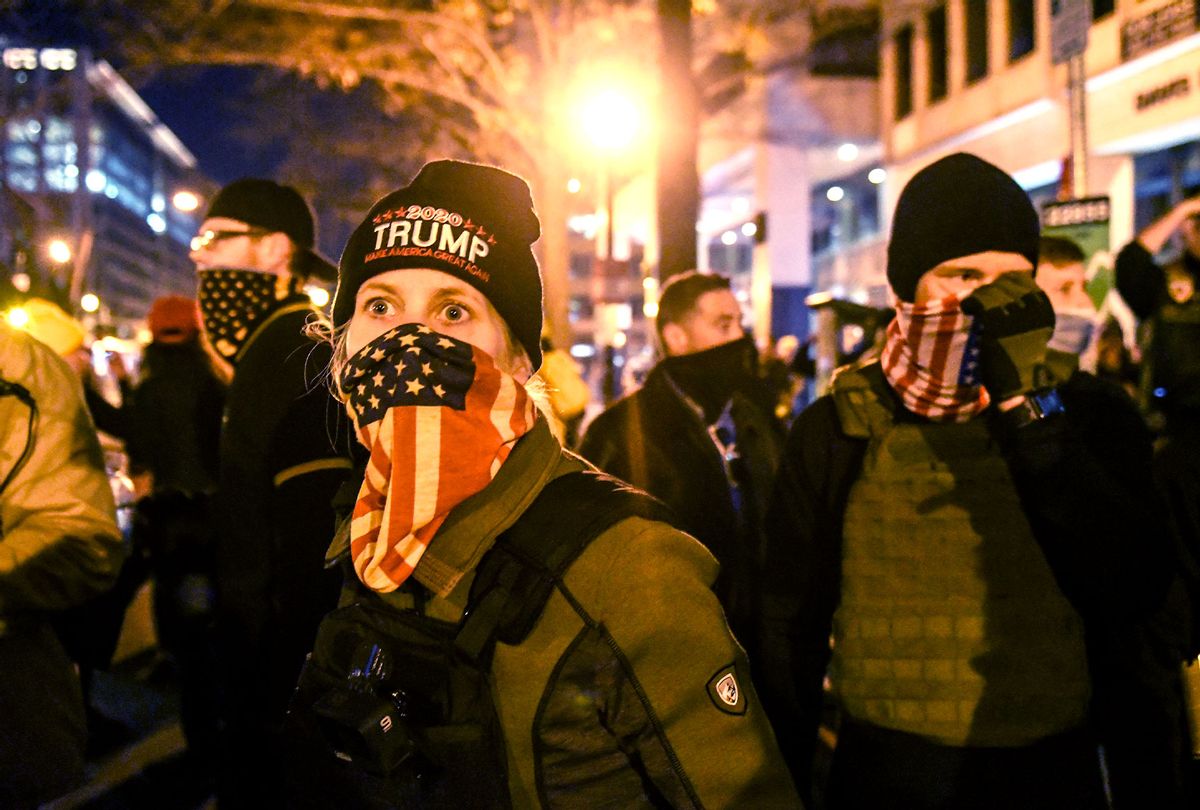 A woman with the Proud Boys wears an American flag bandana during a protest on December 12, 2020 in Washington, DC. Thousands of protesters who refuse to accept that President-elect Joe Biden won the election are rallying ahead of the electoral college vote to make Trump's 306-to-232 loss official. (Stephanie Keith/Getty Images)
--

We're in a period of transition — but transition from what, or to what? Nobody's quite sure. From one president to another, purportedly, but that's the least of it. From a barely functional two-party democracy to some other, choose-your-adventure system of pseudo-democratic, zero-sum partisan warfare? From coup attempt to street conflict and civil war? From a set of vaguely shared political ideals and epistemological assumptions — the famous "democratic norms" — to the total collapse of meaning and language?

Yeah, all of those, or maybe none of them. I would suggest that the crisis of democracy — or what I have previously described as World War IV, an overlapping but larger phenomenon — has entered its decadent or rococo phase. (Can history repeat itself as farce if it was never anything else in the first place?) Comical or fantastical figures like Jenna Ellis, with her Christian-gift-shop degree in constitutional law, or Sidney Powell, the once respected attorney gone deep into discarded plotlines from "Alias," or Michigan voter-fraud testifier Mellissa Carone, who we cannot be sure is not a Kristen Wiig character, or Michael Flynn, the defrocked general turned QAnon-curious wannabe putsch leader, might once have seemed too extreme to be credible. Now they're pretty much normal, and the old-line conservative normies are the weirdos.

I mean, consider the president of the United States: His elaborate performance as a right-wing tough guy who is also the whiniest little bitch in all of creation is campier than anything imagined by any contestant on "RuPaul's Drag Race." Consider his superfans in the Proud Boys, who spent Saturday evening in Washington assaulting random civilians and vandalizing Black churches, but during the daylight hours literally lifted their skirts to reveal coy messages written on their asses. (Were those done with Sharpies? Was that a knowing reference to Trump's famous Alabama-hurricane Sharpie-improv moment? I've thought about this way too much already.)

In summing up our current state of collective dissociation and disorientation, I can't do better than Dahlia Lithwick of Slate, who observes that "in the absence of shared narratives and truths, we think we can use precision in language to reverse-engineer our way into knowable facts." This is of course false, first and foremost because no one agrees on the nature or extent of the realm of knowable facts:

My own sense is that we will not know whether what we are seeing play out — in the state attorney general offices, in efforts to have states designate partisan electors, in calls for mass resistance from Rush Limbaugh and others, in claims that God wants all this — is theatrical or existential until later. … In a sense, just as we cannot seem to figure out which day we can stop announcing that Biden won the election, we are also having a hard time settling on the day we will be able to claim that the coup (or, better, the couplike phenomenon to be named later) was finally thwarted.

Lithwick published that on Thursday evening, an oceanic 24 hours before the Supreme Court declined to hear what was supposed to be Donald Trump's "Kraken," his last, best effort to overturn the results of a presidential election he clearly lost. From any more or less reasonable perspective, that summary slapdown marked the end of Trump's fruitless legal efforts to throw out the votes of states he lost, leaving only a theatrical display of resistance when Congress certifies the electoral votes on Jan. 6. (Short version: Yeah, a handful of obstreperous Republicans could slow that down, but they can't block it.)

But that ludicrous lawsuit filed by Texas Attorney General Ken Paxton — and supported by 17 other state attorneys general and a majority of House Republicans, including the caucus leadership — wasn't the end of anything, as Trump and Rudy Giuliani and other spooks and haunts of MAGA Nation rushed to assure the faithful within minutes of its collapse. It wasn't Trump's last effort to undo the election, since those efforts will never stop as long as he's still breathing (and possibly not after that either). And this craptastic concoction, which literally argued the existence of a voter-fraud conspiracy so brilliantly executed as to leave no traces whatever, definitely wasn't his best shot. That might have been, say, to win the election in the first place, or at least keep it close enough that Amy Coney Barrett and friends could find some baked-in, procedural excuse for stealing it. (Or, hypothetically, to have evidence of actual election-distorting fraud, not that that was ever on the table.)

Many admirable people in the liberal-Twitter caste were up in the discourse over the weekend urging Trump's minions and enablers to show some shame and humility, take the L and return to the (greatly loosened) narrative of political reality in which Joe Biden will soon be president and for the love of God and country, we all have to find a way to get along. But as Lithwick suggests, we don't know for sure whether there's any shared narrative of political reality these days, and the available evidence suggests that we will not and quite possibly cannot find a way to get along.

If the demise of the Kraken was unquestionably a blow to the MAGA tribe's assemblage of QAnon aficionados, militia members, white supremacist "groypers" and affiliated far-right subgenius elements, moving their own goalposts as often and as far as necessary has been a key element of their enterprise all along. (With a glance across the street at Rachel Maddow and the Russiagate fanbase, I would observe that this phenomenon is not exclusively found on the right. Both sides!)

Many such denizens of the internet — um, such as the president of the United States — have already denounced the Supreme Court as a den of swamp-dwelling cowards and traitors, and have at least tentatively announced that the Paxton case was a faux-Kraken, if not a total fake-out designed to distract us all from the Big Thing that's still ahead. If "the plan" is not going exactly as God Emperor Donald J. Trump intended in every possible respect, it is still the plan, and it must be working because no other outcome is possible.

There is clearly a subset of powerful Republicans, especially in the Senate — not just the "moderates" like Mitt Romney of Utah or Susan Collins of Maine, but fully-credentialed right-wingers like Ben Sasse of Nebraska and John Cornyn of Texas — who are eager to leave moonbat "Plot Against America" scenarios behind and return to regular-order politics, by which they mean sabotaging the incoming Biden administration through conventional methods rather than flat-out sedition. Such people have made a strategic bet that the long-term future of their party lies more along the Reagan-Bush Sr.-Bush Jr. continuum rather than in Trumpazoid mass hallucination. Whether or not it's a sound bet, however, very much hangs in the balance.

Painful as this is to admit, I think New York Times columnist Ross Douthat had some useful insights to offer this weekend, along with the usual fake humility and a dose of both-sides bullshit. He's clearly correct that the Republican Party has at least temporarily split into camps of realists and fantasists, and that the Trump enablers have cultivated a "dreampolitik," or a "politics of partisan fantasy," that exists in a sort of "Matrix" universe running parallel to normie politics. He may well be correct that many or most of the 126 House members who openly supported the Trump-Paxton effort to subvert democracy did so on the assumption "that their behavior [was] performative, an act of storytelling rather than lawmaking, a posture rather than a political act."

To be fair, Douthat recognizes that his own underlying assumption that dreampolitik and realpolitik are non-overlapping magisteria, to steal Stephen Jay Gould's famous phrase — and even that delusional fantasies of various kinds may allow fringe wackos to let off steam, without resorting to actual political violence — is looking a bit shaky these days. I will join hands with Douthat in endorsing the charmingly old-fashioned notion that fantasy and reality are different things, but I'm not sure that he or I or anyone else is fully qualified to tell the difference.

Here's where we get back to Lithwick's observation that we don't know what to call this fraught moment in the slow unfolding of World War IV, or how to understand its significance, because we can't even agree on the basic terms of debate. I found this Sunday Twitter thread from writer John Ganz, addressing the "do they really believe this shit?" conundrum, particularly useful:

As Karl Marx observed 175 years ago, sitting on your ass in front of the computer spinning out theories about the world is the easy part; "the point is to change it." (I'm paraphrasing slightly.) I don't know Ganz, but it's a safe bet that he and I — and even, broadly speaking, he and I and Ross Douthat and Dahlia Lithwick — share enough assumptions about the world to have a coherent conversation about what has gone wrong and how to fix it. But what assumptions about reality, or about the terms of legitimate discourse, do we share with groups of men who engage in low-level, fake-Nazi street violence and write sexual invitations to antifa on their own butt cheeks? Is the collapse of America really happening, or is it all just a hilarious troll — and how will we know the difference?