Melissa Carone, whose testimony last week went viral, says she won't get tested unless OANN and Newsmax tell her to 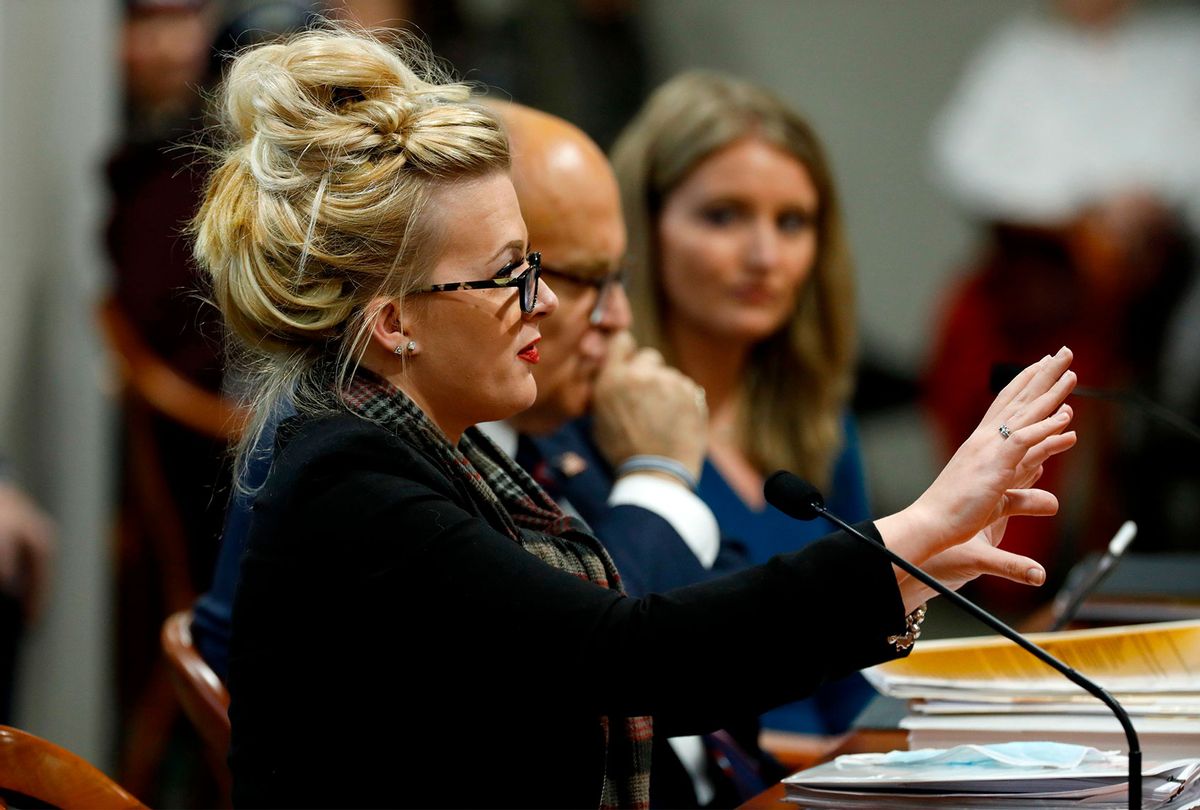 Melissa Carone, whose unsworn testimony next to an unmasked Rudy Giuliani at a Michigan state legislature hearing on voter fraud went viral last week, said on Tuesday that she would not quarantine following his positive COVID-19 diagnosis, despite municipal orders and a legislature shutdown. She had not been tested.

Following the former LifeLock spokesperson's hospitalization on Sunday, Trump campaign legal adviser Jenna Ellis, who had traveled extensively with Giuliani and also sat beside him during the Michigan hearing, announced she had also tested positive for the virus.

The Ingham County Health Department, which has jurisdiction over the state capital of Lansing, ordered anyone who had been within six feet of the president's personal attorney for at least 15 minutes to self-quarantine, The Washington Post reported Tuesday. The directive also applied to the many attendees at the hearing who did not wear a mask.

But Carone, who espoused lies and conspiracy theories about election fraud for nearly half an hour while the former mayor of New York occasionally leaned towards her, at one point grabbing at her arm to rein in her aggressive, told The Post that she had not heard about the health notice.

"I would take it seriously if it came from Trump, because Trump cares about American lives," she said, adding that if fringe networks that regularly traffic in coronavirus misinformation such as One America News or Newsmax "told me to go get tested, I would do it."

"It is not that I don't believe in getting tested. I don't trust the tests," Carone explained. Giuliani, who posed for pictures alongside Carone, has been as "extremely likely" to have been contagious by health officials.

The freelance IT worker received national attention when her disjointed testimony went viral earlier this month. Election officials in every state have said there is no evidence of voter fraud in the presidential election, which Biden won with a record-setting 81 million votes — seven million more than Trump.

Giuliani had exalted Carone as a star witness in the campaign's effort to rewrite the results of Trump's defeat in the 2020 presidential election. But several weeks before her appearance, a Michigan circuit judge had already ruled that her claims were "simply are not credible."

Video of the hearing shows Carone slurring her way through a series of lies about fraudulently tabulated votes while berating a stoic Republican lawmaker.

"What about the turnout rate?" she added, as Giuliani leaned over to tug her arm in an apparent effort to get his witness back on track.

The video racked up millions of views and was later lampooned "Saturday Night Live."

The state House announced it would hold off votes following Giuliani's diagnosis this week. The move follows a more broad action by the entire Arizona legislature to shut down entirely for one week in wake of Giuliani and Ellis's recent address to lawmakers there. On Wednesday, in response to an employee complaint, the Michigan Occupational and Safety Hazard Administration opened an investigation into the legislative body over possible violations of restrictions in place to curb transmission of the coronavirus.

A number of people in Giuliani's circles have recently tested positive for the coronavirus, including the 36-year-old Ellis as well as his communications director, Christianné Allen. Allen, 21, has been in self-quarantine for weeks after experiencing possible symptoms following a Nov. 19 press conference featuring Giuliani and Ellis. Salon first reported that Allen had tested positive Nov. 28, and had been experiencing "more than mild" symptoms.

Giuliani's son, Andrew, tested positive the day after attending the Nov. 19 press event. He said on Thursday that his father has been feeling better.