In private, McConnell is trying to convince Republicans to give up on Trump's election challenge 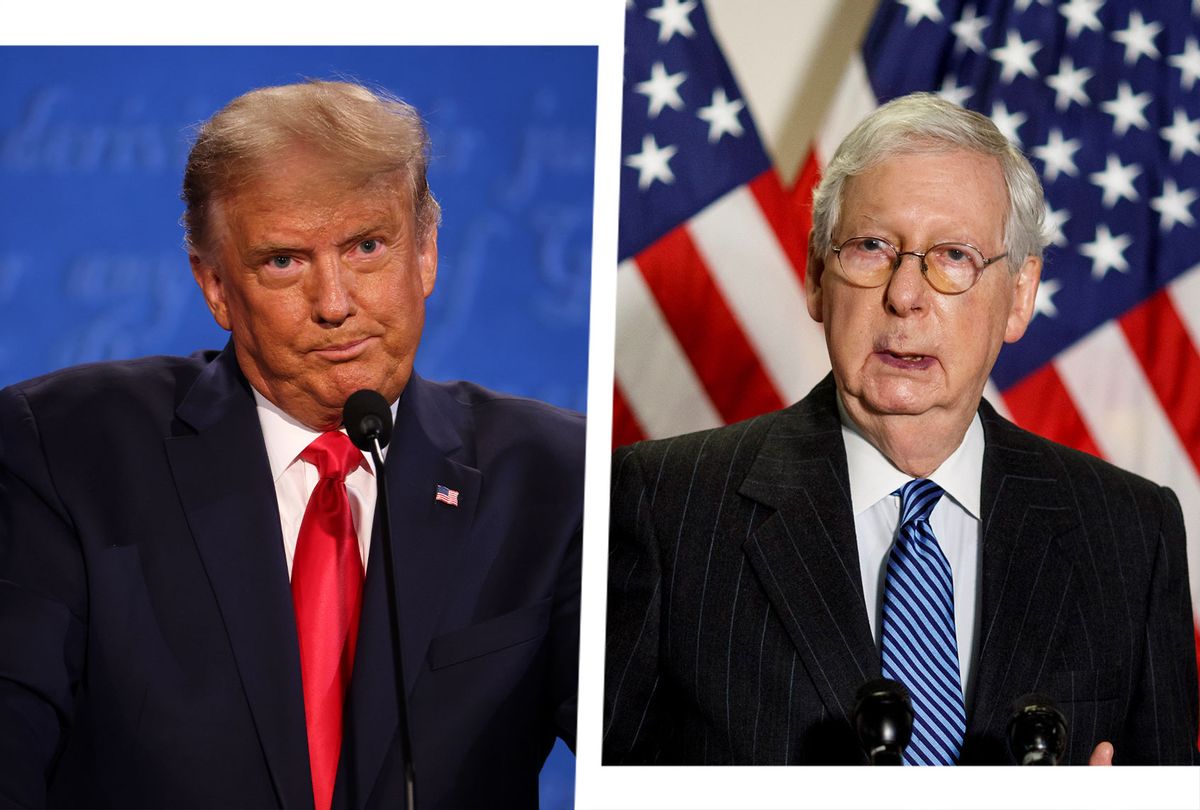 Although the Electoral College confirmed on Monday that President-elect Joe Biden won 306 electoral votes in the 2020 presidential election, some allies of President Donald Trump are hoping that Republicans in Congress will refuse to acknowledge Biden's victory during the Jan. 6 joint session. But according to Axios' Alayna Treene and Politico's Jake Sherman, Senate Majority Leader Mitch McConnell is urging fellow Republicans in the U.S. Senate to accept Biden's certification that day.

On Tuesday, Sherman tweeted that McConnell, Sen. Roy Blunt of Missouri and Senate Majority Whip John Thune, "all pleaded with Senate Rs to NOT object to the election results Jan. 6" during a phone conversation:

Treene, in response to Sherman's tweet, confirmed his reporting:

In an article published by Axios on Tuesday afternoon after those tweets, Treene explained, "Senate Majority Leader Mitch McConnell and his leadership team urged fellow Republicans on a conference call today not to participate in any efforts to object to certifying Joe Biden's presidential election win in the January 6 joint session, two sources on the call tell Axios."

According to Treene, "This is about politics as much as about doing the right thing. Strategists are concerned any public vote could hurt GOP incumbents up for reelection in 2022…. 'McConnell said 'there's zero sentiment' for an objection, according to sources."

Thune, Treene reports, told fellow Republicans, "It would be great if there were no members that took up that issue."

Tuesday on the Senate floor, McConnell finally acknowledged Biden as "president-elect" and Sen. Kamala Harris as vice president-elect and congratulated them on their victories.

Several House Republicans are committed to challenging the results of the election on Jan. 6 when Congress counts slates of electors. For a challenge to succeed, a senator must join in. But even with a congressperson and a senator, the challenge proceeds to deliberations by both the House and the Senate chambers, both of which are nearly guaranteed to reject any chance to overturn Biden's win. So while the hard-core Trump supporters want to create chaos to show their loyalty to the president, the likely result of any challenge is likely to just be more embarrassment and discord in the GOP.