Donald Trump has real reason to be worried: Democrats are pursuing accountability this time

From the New York Attorney General to the chairman of the House Judiciary Committee, Democrats are on Trump's case 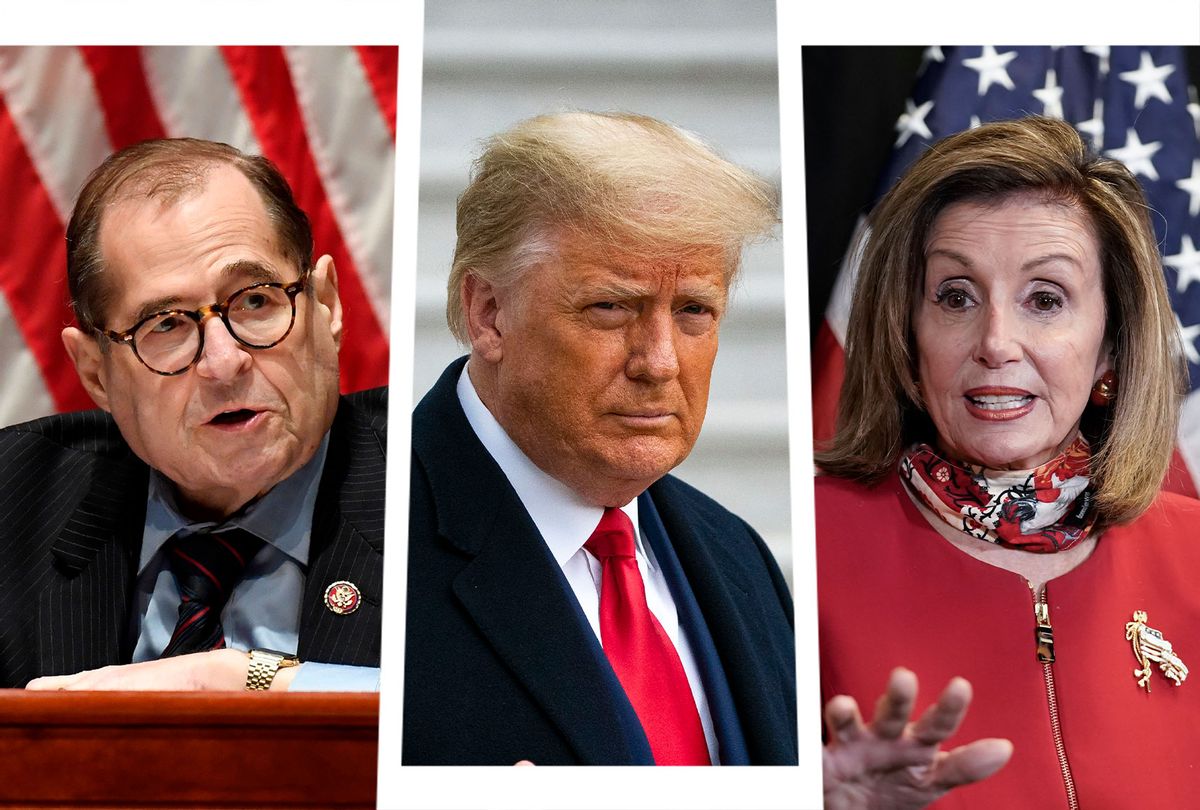 I have been chronicling the atrocities of the Trump era almost daily for five years and I'm exhausted. I don't think I'm alone. One of Trump's most insidious talents is to dominate the spotlight to such an extent that you can't look away even if you want to. He's everywhere. There is just so much, more than we can fully absorb, so we just keep watching, waiting for the spectacle to end, paralyzed and psychically drained.

And now it's almost over.

Aside from some short appearances in the press room to declare himself the winner, a couple of desultory interviews with friendly cable news hosts, one low energy rally in Georgia and the extended, puerile whine of his Twitter account, Donald Trump has been blessedly out of sight for most of the past five weeks. There's been no chopper talk, no televised Cabinet meetings with sycophantic tributes to his greatness, no crude insults toward reporters, nothing.

If one didn't know better, one might assume that the president is ashamed because he lost the election and doesn't want to face the public. But that would be wrong. If there's one thing we know, it's that Donald Trump has no shame.

We don't know if Trump will fire more people, pardon himself and his family, start a war or simply continue to sit in the White House raging against his enemies and tweeting out lies about the election but the fact is that this long national acid trip is winding down at long last. Unfortunately, the hangover is going to be titanic. Unless the nation sobers up quickly and takes action, we may never recover.

The good news is that we are seeing signs of life in the U.S. Congress in this regard.

Rep. Jerry Nadler, D-N.Y., chairman of the House Judiciary Committee, gave notice this week that his committee intends to pursue the subpoena of former White House Counsel Don McGahn. You will recall that McGahn was not allowed to testify before Congress on the basis of a novel legal concept called "absolute immunity" which, if allowed to stand, would render congressional oversight practically impotent.

So while Democrats continue to pursue the subpoena as a means to push back against a legal principle that attempts to usurp their oversight powers, they will undoubtedly follow up on just what happened with all of that obstruction of justice Trump committed. They may not be able to sanction Trump for it, but they need to build the record — after all, this guy may try to bust his way back into power in four years.

Meanwhile, we have also learned that the Manhattan District Attorney and the New York Attorney General's cases are proceeding apace. These cases are beyond the scope of any federal pardon, as you know, so Trump may be seeing the inside of a courtroom whether he pardons himself or not.

But is any of that enough? It can't be, particularly when the New York Times and Politico reported earlier in the week something so shocking that it would be a crime not to investigate it.

Two political appointees at the CDC admitted that they had been instructed to slant pandemic advice according to guidance from people such as Ivanka Trump and Kellyanne Conway. And it's now quite clear that the administration did adopt a herd immunity strategy to deal with the pandemic and lied about it. One incompetent adviser actually wrote "we want them infected" in an email.

We knew this, sort of. Trump had been quoted early in the pandemic wondering why we didn't just let it "wash over the country" which Dr. Fauci, the head of infectious diseases at the National Institute of Health, explained would result in a horrible death toll. Still, Trump clung to that notion and ended up hiring a radiologist he first saw on Fox News, Dr. Scott Atlas, who promoted the concept. These new reports show the extent to which this policy filtered through the government and negatively affected the response. It was a conscious decision. Now over 300,000 people are dead and counting, many of whom might be alive today if Donald Trump were not the president of the United States when a pandemic hit our shores.

The Atlantic's James Fallows took a look at the problem of accountability for what's happened and I think his ideas for how to deal with it make a lot of sense. He suggests that the Biden White House steer clear of most of that work except for the important job of trying to make the executive branch work properly again. Obviously, he should remain hands-off any criminal investigations that might come through the Department of Justice, his only obligation there would be to appoint someone with credibility and integrity to handle whatever cases may already be percolating. So that leaves the Democrats, who control the congressional committees in the House, to create a Good Cop—Bad Cop dynamic between Biden and Nadler which might just be effective if the Democrats stay strong and don't react to bad faith caterwauling from the Republicans.

Fallows also believes that Biden should appoint three commissions, which I think are vital and I really hope that someone in the administration is listening.

The first would be a commission to look at the pandemic response. This won't be the last time we face such a crisis and this one was so much worse than it should have been. The country needs to know how it happened and understand how to ensure it doesn't happen again.

The second commission Fallows recommends would look into the cases of family separation at the border, with an immediate task to find the children and then document meticulously exactly how such a program came to be implemented. As Fallows points out, this didn't happen by executive fiat. There was complicity at all levels and it has to be exposed and dealt with. This grotesque policy is right up there with the pandemic in terms of sheer cruelty.

And finally, Biden needs to appoint a commission to investigate the Trump administration's assault on democracy itself. He didn't invent it, of course, but he's taken it to a level that is in danger of permanently damaging our election system and people's faith in their democracy. And he's done so on the basis of crude lies and propaganda.

Biden doesn't have to be personally involved in any of this. He can stay above the fray and concentrate on doing the job he was hired to do. But these commissions would go a long way toward reassuring the majority of Americans who are still shell-shocked by what has happened in these four years that at least there will be a public airing and permanent record of what went wrong. Most people are hungry for the truth and while I doubt Trump's followers will want to hear it, we need the truth for the history books. At some point, their children or grandchildren may want to know what really happened.