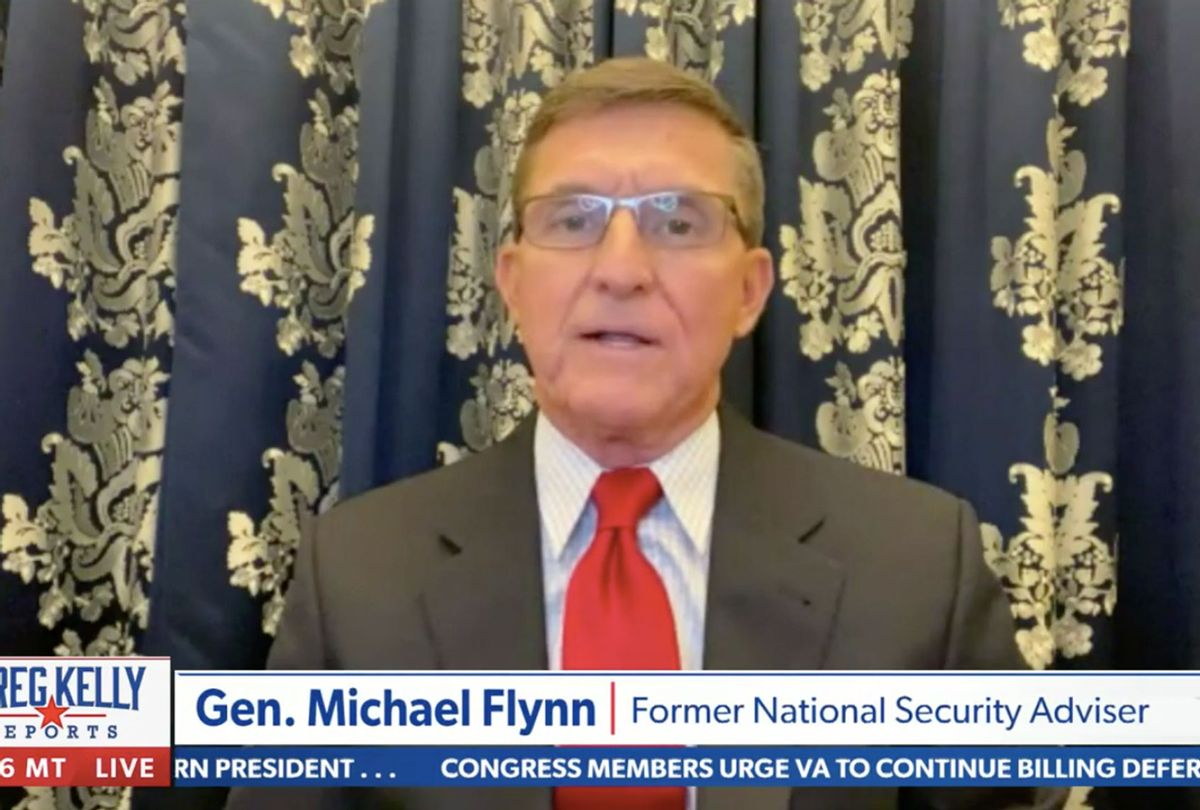 Former National Security Adviser Michael Flynn said that President Donald Trump could use the military to force a new election in certain "swing states" while pushing debunked conspiracy theories about the vote.

Flynn, who was recently granted an unusually broad pardon by Trump, denied that he was urging the president to declare "martial law" but certainly came close during an interview with Newsmax host Greg Kelly, who has for weeks stoked a fantasy that Trump has not lost the election.

"There is no way in the world we are going to be able to move forward as a nation. He could immediately, on his order, seize every single one of these [voting] machines, on his order," he said, citing a conspiracy theory pushed by his attorney, Sidney Powell, claiming a plot financed by China, Cuba, Venezuela and others to flip votes from Trump to President-elect Joe Biden.

"He could order the, within the swing states, if he wanted to, he could take military capabilities, and he could place those in states and basically rerun an election in each of those states," Flynn added.

Flynn insisted that he was not calling for "martial law" even as he touted its use in the past.

"I mean, it's not unprecedented," he said. "These people are out there talking about martial law like it's something that we've never done. Martial law has been instituted 64 times, Greg. So I'm not calling for that. We have a constitutional process."

The federal government has not declared martial law in nearly eight decades, when the FDR administration implemented it following the bombing of Pearl Harbor in 1941.

Flynn's comments came as he pushed Powell's bizarre unfounded conspiracy theory that Dominion voting machines, which are used across much of the country, flipped votes from Trump to Biden but got caught because their algorithm "broke" because Trump received such an overwhelming number of votes. Powell has also claimed that the CIA was involved in the plot and that Republican Gov. Brian Kemp was paid off to stay quiet in the scheme. She has provided no evidence of her claim and was severely criticized by Fox News host Tucker Carlson and radio host Rush Limbaugh for failing to show any evidence of her outlandish allegation.

Powell led a horribly sloppy legal effort parallel to Trump's legal team, which ousted her after pushing the conspiracy theory, seeking to overturn the elections in contested states that he lost, but courts rejected every single one of them. Despite a complete lack of evidence, Flynn declared that the Senate runoffs in Georgia were a "fake election."

"You can't have another election on the same system," Flynn told Newsmax. "It's a broken system, and we cannot allow a system that's tied to foreign powers to be used to vote for the president or any election, any elected office in our country."

Republicans have worried for weeks that the Trumpworld attacks on Georgia's election and Republican officials could hurt their chances of keeping their Senate majority.

"Your reckless disinformation campaign is predicated on lies that have endangered Dominion's business and the lives of its employees," the company said in a letter to Powell. "…Your outlandish accusations are demonstrably false. While soliciting people to send you 'millions of dollars' and holding yourself out as a beacon of truth, you have purposely avoided naming Dominion as a defendant in your sham litigation -- effectively denying Dominion the opportunity to disprove your false accusations in court."

Flynn, who has sworn allegiance to QAnon, the deranged conspiracy theory upended by Trump's election loss, has pushed similar calls for Trump to use the military in an effort to reverse an election he lost by significant margins. He shared a message earlier this month calling for Trump to "temporarily suspend the Constitution" and impose martial law.

Steve Vladeck, a national security law expert at the University of Texas School of Law, said that Flynn's latest "insane rant" relied on pre-Civil War implementations of martial law, "almost all of which were repudiated" by the Supreme Court in 1866 when it ruled that it "can never be applied… where the courts are open and their processes unobstructed."

Rep. Bill Pascrell, D-N.J., described Flynn as a "treasonous felon" calling for Trump to "become a dictator." Rep. Don Beyer, D-Va., added that "this fascist should be in prison."