If "you announce massive bombshells, then you better have some bombshells,” Rush Limbaugh points out 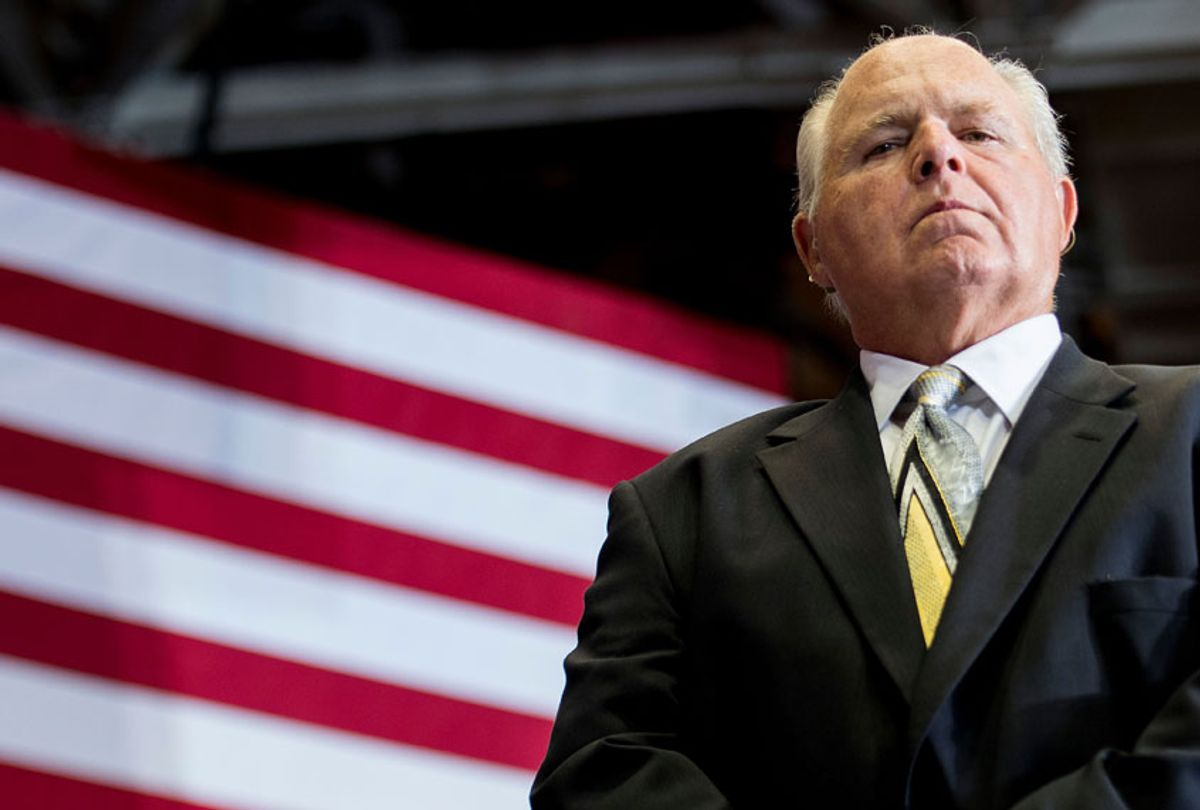 Conservative radio host Rush Limbaugh on Monday complained that President Donald Trump's legal team had failed to deliver any evidence after promising "bombshells" in its bid to subvert the election.

Limbaugh, who received the Medal of Freedom from Trump earlier this year, hyped unfounded claims made by the president's legal team as much as any media personality since President-elect Joe Biden won the election.

"Rudy [Giuliani] made a strong case that the fraud is big enough to change the result and that the evidence is clear," Limbaugh proclaimed after the legal team's disastrous press conference last week where black goo streamed down Giuliani's profusely sweating face. "Sidney Powell, with the evidence of fraud from the machines. She detailed evidence of communist money from China, from Russia."

Limbaugh even echoed Powell's bizarre and totally baseless claim that Dominion voting machines, which are used across much of the country, had "melted down" because they "could not overcome the number of legitimate Trump votes" since the "Trump votes were so overwhelming."

But after Powell was ousted from the president's legal team for pushing a conspiracy theory which even Giuliani and Trump thought was bonkers amid repeated losses in court, Limbaugh lamented that no bombshells had been revealed.

According to Limbaugh, Powell "jumped the shark."

"I talked to so many people who were blown away by it — by the very nature of the press conference," he added. "They promised blockbuster stuff, and then nothing happened. And that's just — it's not good."

Powell claimed, without any evidence, in the news conference and subsequent media appearances that a global plot tied to Venezuela, Cuba and likely China aimed to program Dominion voting machines to switch votes from Trump to Biden — but the conspirators got caught because the overwhelming number of votes received by Trump "broke" the algorithm. Despite Trump announcing Powell as a member of his legal team and her appearance at the news conference, Giuliani later released a statement claiming that she was "not a member of the Trump Legal Team" and not working for the president "in his personal capacity."

Powell also drew criticism from Fox News host Tucker Carlson, who said he would have offered her a week's worth of shows to broadcast her conspiracy theory to millions.

"But she never sent us any evidence despite a lot of requests — polite requests, not a page," Carlson said last week. "When we kept pressing, she got angry and told us to stop contacting her. When we checked with others around the Trump campaign — people in positions of authority — they told us Powell has never given them any evidence either, nor did she provide any today at the press conference . . . She never demonstrated that a single actual vote was moved illegitimately by software from one candidate to another."

Despite not producing any evidence, Powell later expanded her conspiracy theory to include alleged bribes to Georgia Gov. Brian Kemp, a Republican.

"Sidney Powell accusing Gov. Brian Kemp of a crime on television yet being unwilling to go on TV and defend and lay out the evidence that she supposedly has — this is outrageous conduct," former Gov. Chris Christie, R-N.J., a longtime Trump ally, told ABC News after her comments. "Quite frankly, the conduct of the president's legal team has been a national embarrassment."

"While Giuliani was key in stoking Trump's conspiracy theories, Trump loss in [the Pennsylvania] suit made him realize Giuliani was not painting honest picture," she wrote on Twitter. "He told Trump other advisers were lying to him. Then he proceeded to have hair dye drip down his face at a conspiracy theory-laced presser [with] Sidney Powell."

Trump on Monday said he would allow the presidential transition to begin, even as he vowed to fight the results and "never concede."

But Republicans worry that Trump's legal antics have greatly damaged the party ahead of two runoff Senate elections in Georgia that will determine control of the upper chamber.

"Many Republicans are at a point now where they don't trust the outcome of the system, which is never a good thing," Gabriel Sterling, who runs the state's voting system, told Yahoo News on Monday. "Is it going to suppress the vote to a certain degree? Absolutely."