"One explanation? He needs a pardon and he's trying to earn it," a CNN analyst says 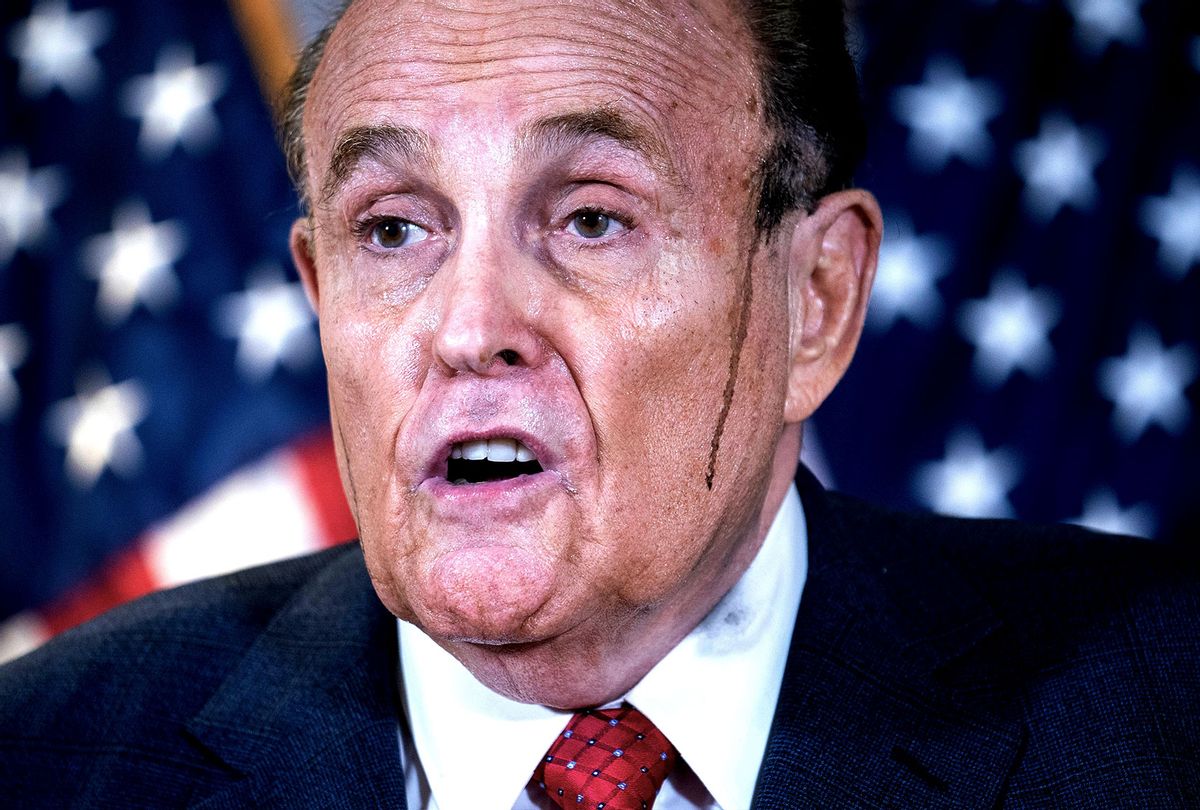 At one point, brown-tinged liquid inched down Giuliani's cheeks after hair coloring appeared to sweat off the man formerly known as "America's mayor."

There is no evidence of voter fraud in the presidential election, according to election officials in every state. President-elect Joe Biden won with a record-setting 80 million ballots, posting a margin of victory of nearly six million votes over Trump.

The Trump campaign was met with defeat in three lawsuits on Thursday, hours after dropping a separate federal lawsuit in Michigan seeking to block the certification of ballots from the Detroit area. Giuliani admitted in open court in Pennsylvania on the previous day that an alleged fraud case was actually "not a fraud case."

Among the lies told by Giuliani and Powell were dishonest attempts to link Dominion voting machines to former Venezuelan President Hugo Chávez, who died seven years ago. The self-proclaimed "elite strike force" also alleged that the machines were financed by the Clinton Foundation and Democratic megadonor George Soros.

The conference reached the apex, however, with a stemwinder first posited by Powell and echoed more than once by Giuliani, repeating a false conspiracy theory circulating in right-wing internet crawlspaces that those voting machines had somehow sent American votes to Germany which were in turn counted in Spain.

Giuliani's son, Andrew, who holds a vaguely defined official position at the White House and was present at the press conference, tested positive for COVID-19 the next day.

Christopher Krebs, Trump's recently-fired former director of a Department of Homeland Security cybersecurity unit, called it "the most dangerous hour and 45 minutes of television in American history. And possibly the craziest."

The New York Times' Maggie Haberman reported that the sentiment was shared even among Trump's aides: "Trump advisers — none of whom are speaking publicly — are saying this press conference and what Giuliani is doing is dangerous. They're waiting for the president to recognize that but he is not so far."

Ahead of the election, Giuliani, whose pro bono work for the president led directly to his impeachment, for weeks pushed a dubious story alleging that contents from a hard drive of unknown origin revealed criminal wrongdoing on the part of Joe Biden's son. The conspiracy campaign culminated in an online video broadcast in late October in which Giuliani called the former vice president the "prince of darkness."

This whirlwind of outlandish claims have struck observers — Trump allies included — as smacking of desperation. As the brown streaks crept down the cheeks of the former mayor, a Trump campaign adviser texted a journalist from The Washington Post asking, "Is he deteriorating in real time?"

Trump backer Geraldo Rivera said on Fox News, "I love the president. I wanted him to win this election. What I saw with Rudy Giuliani, who I've known for decades, was bizarre."

GOP pollster Patrick Ruffini tweeted on Thursday, "The thing about Rudy is that he wasn't a carnival barker or a second-rate figure who needed to flail wildly for attention. He had mainstream respectability and was a national hero for a time. Why he decided to go down this road is a great mystery."

The defense attorney for Lev Parnas, one of Giuliani's indicted former associates, asked the question of the void of Twitter: "What's happened to Rudy Giuliani?"

CNN analyst Joe Lockhart suggested that Giuliani, who has over the last two years aligned himself with foreign agents and indicted felons, might need Trump's protection.

"One explanation of why Rudy is doing what Rudy is doing? He needs a pardon and he's trying to earn it," Lockhart tweeted.

A CNN report on Thursday included a passage indicating that Giuliani had recently come under renewed federal scrutiny.

"Complicating matters is that Giuliani's post-election swirl of activity comes as federal investigators renewed their investigative interest into his work that is already the subject of a New York-based investigation," CNN reported.

In recent weeks, FBI agents in New York contacted witnesses and asked new questions about Giuliani's efforts in Ukraine and possible connections to Russian intelligence, according to a person briefed on the matter. The FBI investigators, who have spoken to at least one witness previously months ago, came back to ask new questions recently about possible origins of emails and documents related to Hunter Biden that appear similar to those that the New York Post reported that Giuliani and others helped provide. CNN has previously reported that the ongoing probe is examining whether Giuliani is wittingly or unwittingly part of a Russian influence operation, according to people briefed on the matter.

The report added that the investigation had cycled out of the headlines as Giuliani arrogated the leading role in Trump's challenges to his defeat.

According to interviews conducted by Salon with individuals familiar with the case and multiple news reports, Giuliani's business dealings have been subject of an extended federal probe led by the FBI and the Southern District of New York — the very office he once led.

That probe grew out of the arrest of Parnas and another Giuliani associate, who were booked one year ago on unrelated campaign finance charges at a Washington-area airport as they waited to board a flight to Vienna. Their arrests came as impeachment hearings heated up in Congress — and one day after they met Giuliani for drinks at Trump's Washington hotel.

This week, The New York Times reported that Giuliani, who has scraped for cash in the last year, asked the Trump campaign to pay him a day rate of $20,000 for his work on the last-ditch legal crusade. Such a price tag would rank Giuliani among the most highly paid lawyers in the world.

However, his performance so far has heads shaking.

"If the campaign doesn't want to pay him $20,000 a day, I'm sure the Biden campaign would," a former senior Trump White House official told CNN.

"It's easy to joke about this, and Rudy has become the butt of a lot of jokes. On the other hand, this is deadly serious stuff," top election law expert Rick Hasen told CNN. "They're talking about trying to disenfranchise hundreds of thousands of people, and take the election away from the winner and hand it to the loser."

Neither Giuliani nor the Trump campaign responded to Salon's requests for comment.