Can "earmarks" fix Washington dysfunction? A former symbol of corruption is now a sign of hope

Earmarks have long been criticized as organized "bribery" — but some lawmakers think they can break D.C. stalemate 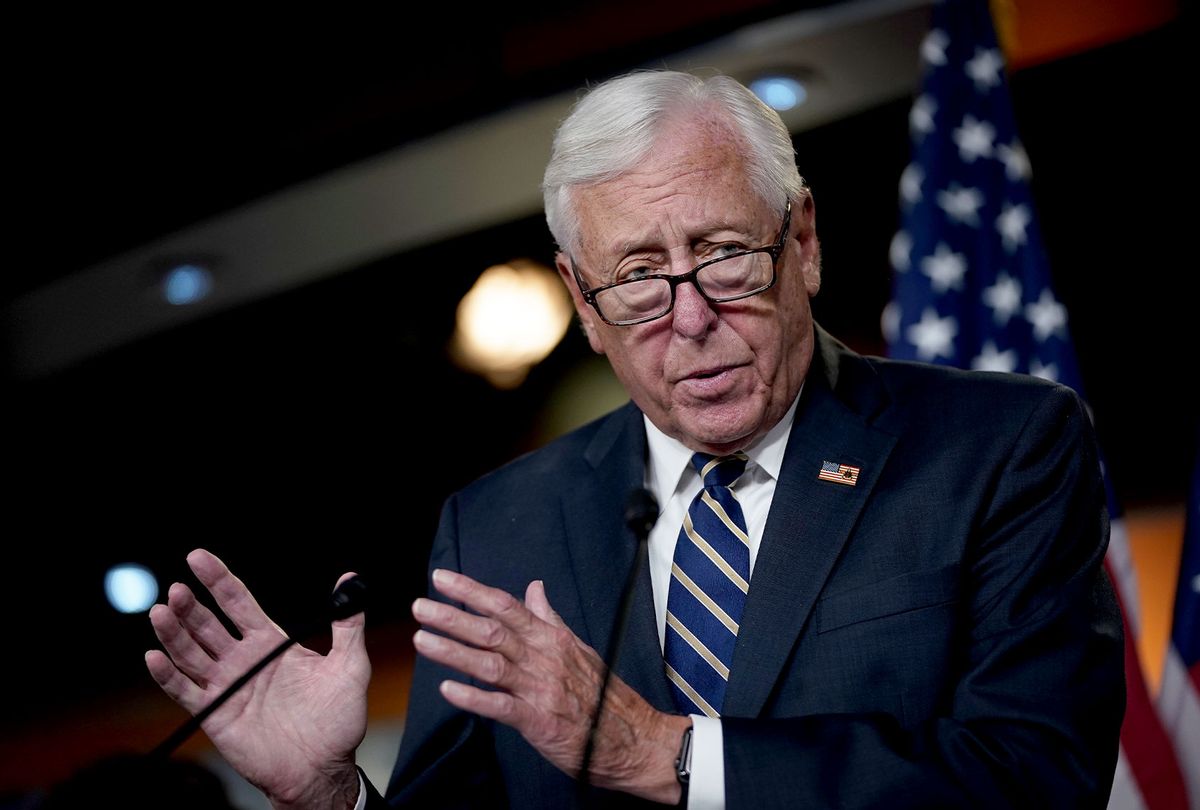 Both parties spent years decrying congressional "earmarks" and "pork-barrel spending" as organized "bribery." But a growing number of lawmakers think that bringing back these controversial legislative tactics could be an answer to Washington's hyper-partisan gridlock.

Earmarks are approximately the least sexy aspect of Washington dealmaking, but it's important to grasp their significance. The term means provisions added to spending bills that typically direct funding to lawmakers' pet projects to gain their support. They were widely criticized during the George W. Bush and Barack Obama presidencies as wasteful, sometimes illegal and frequently corrupt. The infamous Alaska "bridge to nowhere," a $223 million project to connect a remote town of 8,000 people to an airport that was pushed by the state's Republicans, became the epitome of government waste. A separate earmarking scandal led to the 2005 conviction of former Rep. Randy "Duke" Cunningham, R-Calif., who was accused of accepting millions in bribes from defense contractors in exchange for steering projects their way. More than a dozen others were convicted in a Bush-era scheme by former lobbyist Jack Abramoff, who was accused of bribing Republican lawmakers in exchange for securing earmarks for his clients.

Lawmakers from both parties, along with President Trump, have since complained that these bans have hamstrung legislation and increased partisanship. Others have criticized the bans, on the other hand, because they did not exactly end earmarks. Rather, they forced powerful lawmakers to make stealthier funding grabs, buried deep in spending bills.

Discussions about bringing back earmarks ultimately faltered earlier this year. But House Majority Leader Steny Hoyer, D-Md., Nancy Pelosi's chief lieutenant, announced a plan last month to bring back earmarks with transparency and funding restrictions in the next term.

Rep. Peter DeFazio, D-Ore., a co-founder of the Congressional Progressive Caucus, has said that earmarks are "absolutely critical" to push through legislation like an infrastructure bill.

Rep. Mark Pocan, D-Wis., co-chair of the Progressive Caucus, previously told Roll Call that as much as 90% of House members privately support restoring earmarks, as long as both parties agree "not to politicize it."

It's unclear whether Senate Republicans would reverse their position after last year's vote, though powerful leaders like Appropriations Committee chairman Richard Shelby, R-Ala., have called for bringing back earmarks.

The bipartisan Select Committee on the Modernization of Congress, established by Democrats after they won control of the House in 2018, recommended that lawmakers bring back earmarks.

"Earmarks were painted as a coven for corruption, a practice reserved for the funding of needless projects to benefit the friends, supporters and donors of members of Congress. Much of this was hyperbole, as earmarking was only abused by a handful of members in the past," John Hudak, a senior fellow at the Brookings Institution and the author of "Presidential Pork," testified to the committee.

Many government experts agree that although the earmarks process is far from perfect, it could help break the partisan fever that has gripped Washington for the past decade.

"We are in a time of historic negative partisanship," Josh Huder, a senior fellow at the Government Affairs Institute at Georgetown University, told Salon. "And there's very little within the political process that is creating incentives or reasons for the two parties to work together or communicate in a way that is not overtly negative and overtly, negatively partisan. And I think earmarks is one of those things that cuts across that general trend. It's not about making negative policy statements or 'owning the libs' or really going after the 'fascists' or anything like that."

Earmarks, Huder said, can create incentives for lawmakers to "communicate with one another in a way that's not totally awful."

"There's an understated political effect here, that to the extent we want processes that facilitate compromise and cooperation across the party aisle, this is a good thing," he argued. "It should be viewed as something that is maybe long overdue within the last decade, where we've just seen some outright bad, awful, negative partisanship."

Huder cautioned that earmarks are not a magic bullet that will fix Congress overnight, noting that they would primarily aid in the passage of appropriations or funding bills but are unlikely to help pass something like a coronavirus relief bill or a large infrastructure package.

Allowing earmarks "could get the appropriations process moving potentially because all of a sudden you're allowing individual members to have a special carve-out in a bill that actually brings something back to their district," he said.

But there's a problem. "We're pretending this is a world where appropriations bills pass and become law and there's some sort of regular routine funding of the government that doesn't involve a [continuing resolution] or a shutdown threat," Huder continued. "We're pretending that a budget exists. And that's a huge problem, because budgets have not existed to a significant degree over the past decade. … So Congress doesn't even have step one, much less step two through 13, to pass all these appropriations bills and fund the government on time."

Budget groups remain concerned about the potential for waste and abuse. Stephen Ellis, head of the budget watchdog Taxpayers for Common Sense, said that lawmakers must enact numerous reforms if they want to bring back earmarks.

"Congress needs to create a downloadable, searchable database of all earmark requests, all earmark awards, their beneficiaries, their intended purpose," he said in a statement to Salon, arguing that Congress should also reduce the funding available for earmarked projects and restrict the types of projects eligible for earmark funding. Earmarks should be barred in competitive or merit-based or formula funding programs, he said, and there should be penalties for private entities that try to get around the proposed ban. The Government Accountability Office should audit 5 to 10% of earmarks each year to make sure they have achieved their goals, Ellis added.

Democrats say they plan to include provisions requiring each earmark's sponsor to be identified and published online, banning private sector entities from receiving earmarked funds, and barring members who have a financial stake in a project from earmarking funds for it. Earmarks would also be capped at 1% of the spending level in the annual funding bill.

"Proponents think earmarks are a magic pixie dust that makes everything work better," Ellis said in an email. "That's simply not the case, major legislation like transportation bills, water project bills, tariff relief, even the 2017 tax cut (which we opposed) have been enacted during the moratorium.

"It requires work and leadership. Since the budget process was established, all the spending bills have been completed on time precisely four times. The last time they were all done individually and on time was in 1994. So don't expect Congress to operate like a well-oiled machine with earmarks."

Huder agreed that earmarks would not magically restore the once-normal function of Washington but argued that concerns over "frivolous projects in communities" were overblown because "there are projects that aren't out there for the national good that nonetheless serve a purpose within a parochial locality or state."

Earmarks were never quite as bad as their reputation suggested, Huder said. "It was typically not an abusive thing, especially near the end of earmarks. Democrats had transparency controls in there. You had to announce how much money you were asking for. You had to label the project, what it was being requested for. All of this stuff was pretty solid back in the day."

Concerns over possible abuse are legitimate, he continued. "But I don't think it's nearly as widespread as many people would assume it to be. It's a much smaller fraction of the budget than people assume it to be. It doesn't increase the deficit the way many people assume. There are a lot of negative labels and stigmas that are associated with earmarks that earmarks simply aren't responsible for."

The New York Times editorial board, which came out in favor of restoring earmarks last month, noted that earmark funds typically make up less than 1% of the budget, adding up to "little more than a rounding error." Many earmark opponents have criticized them, the editorial argued, because they can make legislation these groups oppose easier to pass. Furthermore, in the absence of congressional direction on how to spend taxpayer funds, the executive branch often steps in to direct spending to its own pet projects.

"Presidents — and their appointees — engage in pork-barrel politicking (earmarking) in the same way Congress does," Hudak, the Brookings fellow, wrote after Democrats won back the House in 2018. "Reforming the process in Congress by curtailing the practice of earmarking simply shifts that power more explicitly to a president and a cadre of unelected bureaucrats in government. Eliminating earmarking is a serious abdication of power by Congress which empowers a branch of government beyond what the Founders intended."

Earmarks have also been described as biased because powerful lawmakers and their allies tend to gobble up a lot of the earmark spending. But Huder noted that earmarks are likely to be fairer than the current process, in which congressional committee chairs "have much more leeway to influence where money is directed."

"The real big secret in Washington is that people with power tend to get the better earmarks. … it does put the thumb on the scales of many of the members that are in power," he said. "There's an argument also that they bias the decision-making away from those in power," because the powerful legislators who write most bills have far more control over spending than "other members in the rank and file."

Many Republican lawmakers have opposed bringing back earmarks. Senate Majority Leader Mitch McConnell, R-Ky., was noncommittal when asked about the House push.

"I haven't given any real thought to that," he said earlier this month. "That's a decision obviously the majority has decided to make over there and it'll be interesting to see how the Republicans in the House respond to it."

But some Republicans have pushed to restore earmarks out of frustration with the status quo.

"I can tell you many members are so frustrated because they're like: 'All I do here is maybe vote three or four times a year on anything that's relevant, and actually I have no input on what that package looks like,'" Rep. Tom Reed, R-N.Y., co-chair of the bipartisan Problem Solvers Caucus, told USA Today. "'It's just a "yes" or "no" vote and I really don't even know what's in it and none of my priorities get addressed because it's all done in the front office.' But with congressionally directed spending, your priorities — why you ran to be a member of Congress — you're actually doing the work you were sent to D.C. to do."