How Bunny the talking dog captured the internet and science's attention

But can she really talk? Her owner and researchers discuss communication and how this affects the human-canine bond 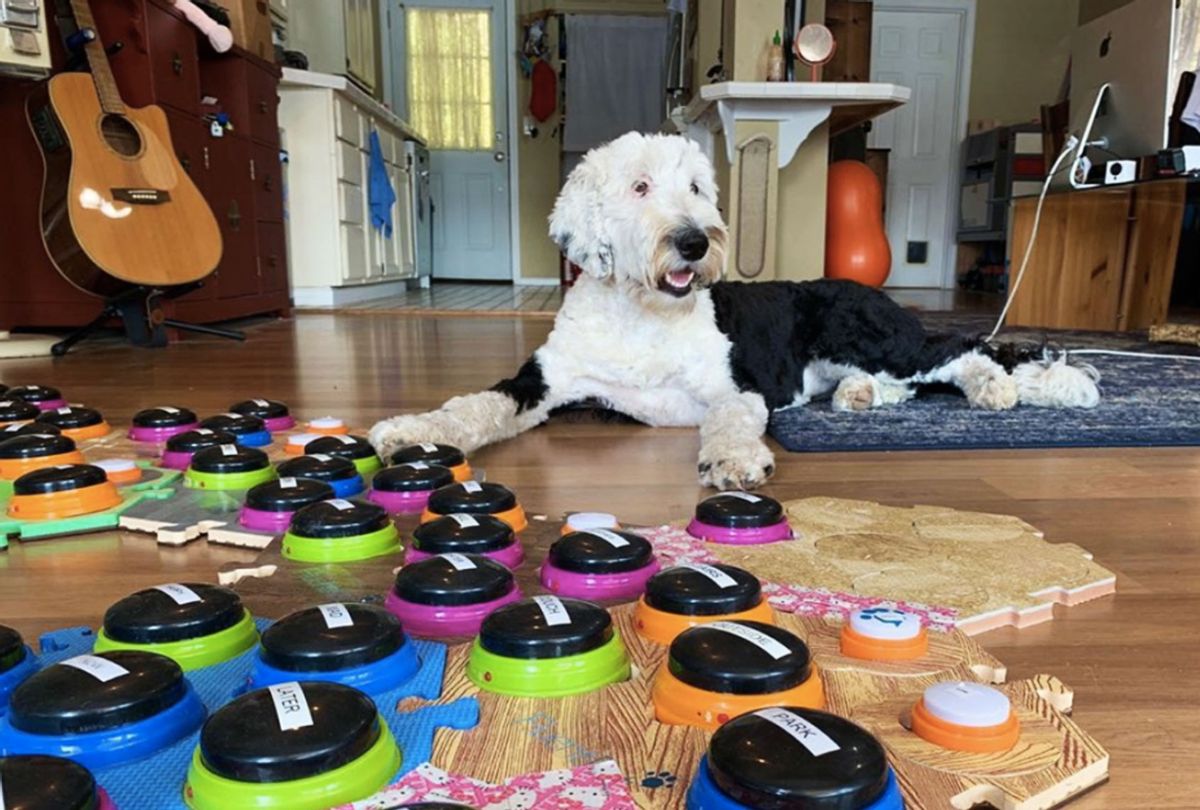 Many of us have seen a dog stare at themselves in the mirror, sometimes placing a paw on the glass. This kind of behavior might lead one to believe that dogs can recognize their own reflection. As cute as a self-aware dog might be, scientific evidence suggests otherwise. Indeed, it is widely believed that dogs don't use mirrors to refer back to themselves like humans do — yet when TikTok's beloved Sheepadoodle named Bunny did it in November, the entirety of the interaction was another piece of evidence hinting at Bunny's linguistic and cognitive abilities.

In the viral 40-second TikTok video, Bunny "speaks" or communicates by pressing the buttons "who" and then "this" on her augmentative and alternative communication (AAC) device, which is a sound board made up of 78 buttons with a different word vocally recorded on each. Alexis Devine, Bunny's human parent, narrates what's happening. "Did you just say 'Who this?' and look in the mirror?" Devine proceeds to press a button with Bunny's name on it, which causes the dog to run toward the door, and stare outside. A few moments later, Bunny presses a button that voices the word "help."

The video led many to believe that Bunny was having an existential crisis, which spawned many entertaining TikTok memes. Still, Devine wonders if viewers are using humor to cope with something deeper.

"I don't think she's actually having an existential crisis," Devine told Salon in an interview. "I think that some people are just now beginning to realize that this isn't just like a fluffy potato that you have in your life, this is like a deeply sentient creature that has a lot going on cognitively, that has emotions and that, you know, maybe should be treated more more as an equal than as property."

Bunny, who has 5.7 million followers on TikTok, is one of nearly 1,400 animals enrolled in a project called "They Can Talk," which is seeking to better understand if animals can use AAC systems to communicate with humans. The project consists of 1,300 dogs, 67 cats, plus a couple of horses. In the study led by Federico Rossano, director of the Comparative Cognition Lab at UC San Diego, participants receive instructions on how to set up their AAC buttons. They usually start with easy words like "outside" and "play" linked to their buttons. Pet parents set up cameras to constantly monitor the animals when they're in front of their boards, data which is sent to the lab where researchers examine what they say.

There is a long history of humans exploring whether or not animals can communicate to humans. There was Chaser the Border Collie, who learned over 1,000 nouns; a parrot, Alex, who seemed to genuinely say "I love you"; and of course, Koko the gorilla, who knew American signal language. Rossano and his team aren't trying to find the next famous animal to join that list — although, arguably Bunny already has — but instead they're trying to better understand what dogs do when they're trying to communicate with humans.

These are interesting questions. But ultimately, Rossano and his team are most interested in understanding if dogs can communicate in ways that humans have long believed are "uniquely human." For example, can they describe what they're seeing to humans, share their emotions, understand time or communicate about something that isn't there?

If you've watched Bunny's videos, you've seen her ask for "scritches," request beach trips, and press "ouch" when she had a foxtail in her paw. Part of her success is not only that she's a mix of a Poodle and Old English Sheepdogs, two intelligent breeds that are easy to train, but also Devine's dedication to the process.

Before Devine got Bunny, she saw Christina Hunger, a speech-language pathologist, who taught her dog Stella, to use an AAC device. Devine read her blog, and made the decision to train Bunny with a soundboard before she brought Bunny home. "I had zero expectations, and just thought I'd give it a shot and see what happened, but within a few weeks she was using it at her own volition to request outside, and at that point we added the 'outside' button to a board with a couple of other buttons and have been growing her vocabulary ever since."

Now she can use 78 words. Devine said they are currently working on pronouns.

"I start every morning by waking up, coming downstairs, going to the buttons and I say, 'Good morning, Bunny. It's morning now,' and then I just leave them alone," Devine said.

On rainy days, Devine said, Bunny likes to sleep. Aside from then, she's usually pretty curious about the buttons and communicating with them.

When asked if Bunny is really "speaking," Devine said answering that question is an "emotional roller coaster."

"Some days I'm just astounded and I'm like there's no way this could all be coincidence. It's so clear, it's so expressive, and it's so contextually appropriate," Devine said. "Then, you know, there are other days where it seems like she's just sort of exploring buttons where a lot of it feels random."

Rossano said, scientifically speaking, Bunny is not literally speaking.  She's spontaneously pressing buttons, testing communication. The question is, is Bunny doing so in a way that is comparable to how a 2-year-old child strings their words and concepts together?

"Bunny combines buttons in ways that appear to have information structure similar to what you might see a toddler doing," Rossano said. The open question, Rossano said, is if Bunny is learning to copy the behavior that Devine rewards after producing a sequence of words, or if Bunny is producing word-like sentences in "novel structures."

Bunny is certainly a "remarkable" case study in the project and has exceeded Rossano's expectations, especially in the videos where Bunny appears to be expressing that she's experiencing pain. Since she joined the pilot program, Rossano said, Bunny is way ahead of the curve — but there are other animals advancing. Bunny started earlier in the study, but other dogs are catching up.

"We have a few others that have approximately 40 buttons that they know how to use, and they similarly produce several button combinations," Rossano said. "We have one pilot participant that, after six months, has managed to train his dog to learn only four buttons. You might say well that's a massive failure, but the reality is that those four buttons are four critical buttons for communication. One is 'outside.'"

Beyond the scientific questions, Rossano said it's possible that this study could lead to AAC devices being used more regularly between humans and their dogs. Specifically, researchers want "to see how these kinds of tools might help the interaction and the bonding between humans and pets," Rossano said. "We are very interested in seeing not just what it tells us about dogs' cognition and communicative abilities, but also what it could do to potentially improve their relationship with humans and their welfare overall."