"We are not embarrassed enough": Ilhan Omar slams Congress for failing the public on COVID relief 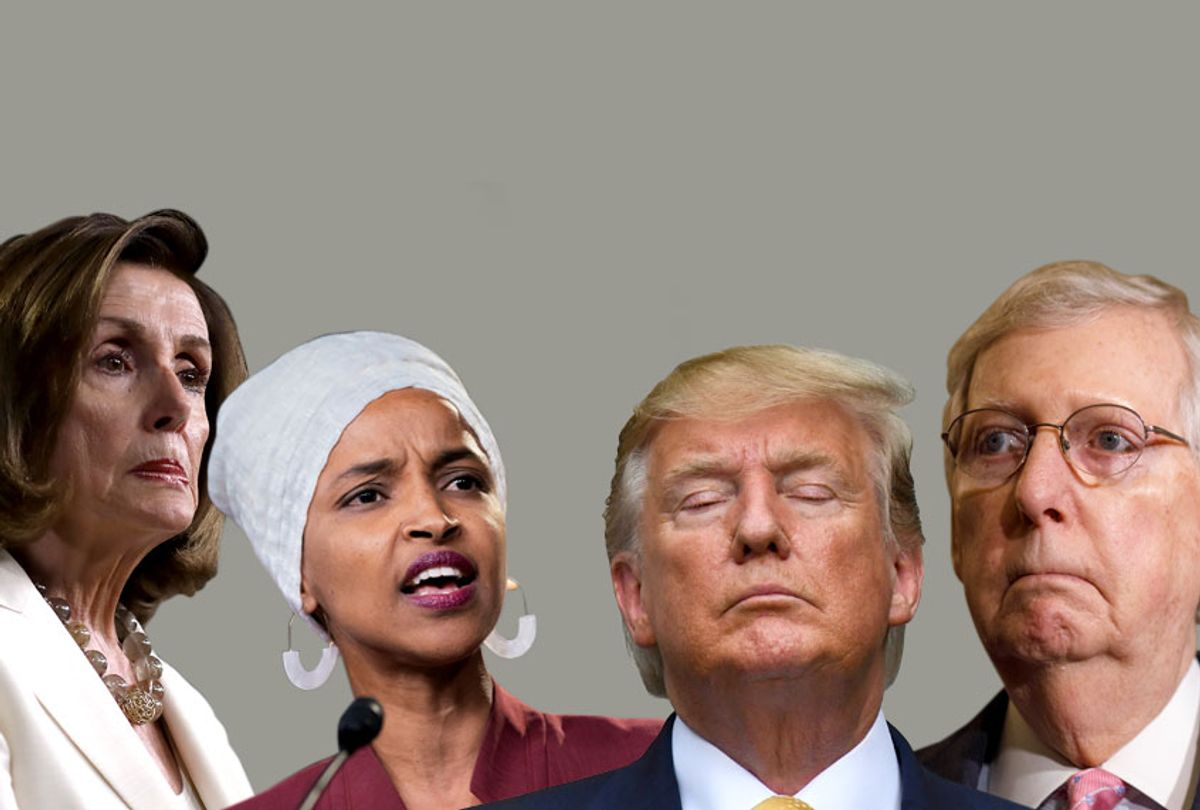 With a coronavirus relief deal finally coming together after months of disastrous inaction from Congress and obstruction by the GOP, Rep. Ilhan Omar said late Wednesday that lawmakers should be "embarrassed" by the inadequacy of the emerging package given the scale of the public health and economic emergencies facing the country.

In an interview on "The Mehdi Hasan Show," the Minnesota Democrat lamented that the $900 billion relief measure congressional leaders are close to finalizing is dramatically smaller than the $2.2 trillion CARES Act approved in March.

"It's really quite shameful that we find ourselves negotiating a deal with such a small amount of money when we know just how devastated the American people are across our country," said Omar, the whip for the Congressional Progressive Caucus (CPC). "Think about it: in March, we were able to send $1,200 checks to people and give them $600 in unemployment insurance benefits. And now we're talking about possibly sending a one-time check, eight months later, of $600 and reducing that unemployment benefit to $300."

"We are not embarrassed enough as leaders," said Omar, who last week joined a CPC letter (pdf) demanding "at least $2,000 for all working individuals and families" in the relief package.

Omar's frustration with the paltry size of the current relief measure relative to previous proposals has been echoed by other progressive lawmakers in recent days as the economic meltdown spurred by the coronavirus pandemic continues to inflict massive damage. Researchers at the University of Chicago and the University of Notre Dame estimate that nearly eight million people in the U.S. have been pushed into poverty since the summer.

"The economists say the sharp rise in poverty is occurring for two reasons: Millions of people cannot find jobs, and government aid for the unemployed has declined sharply since the summer," the Washington Post reported. "The average unemployment payment was more than $900 a week from late March through the end of July, but it fell to about $300 a week in August, making it harder for the unemployed to pay their bills."

Senate Republicans have repeatedly blocked necessary relief over the past several months, refusing to even consider ambitious legislation such as the $3.4 trillion HEROES Act, which the Democrat-controlled House passed in May. Republicans also brushed aside the revised $2.2 trillion version of the HEROES Act that the House passed in October.

But Democratic leaders have also come under fire for their approach to the relief talks. Alluding to a stimulus package that was discussed prior to the November presidential election but ultimately rejected by the Democratic leadership, Rep. Ro Khanna (D-Calif.) tweeted earlier this week, "I was ridiculed when I said take $1.8 trillion."

"That had $1,200 for each adult, $1000 per child, $400 [per week in additional unemployment benefits], $300 billion state and local," Khanna noted. The California Democrat was among a small number of Democratic lawmakers who urged House Speaker Nancy Pelosi (D-Calif.) to run with the $1.8 trillion offer floated by the White House, and then pursue a larger package after the election.

Speaking to Politico on Monday, Sen. Bernie Sanders (I-Vt.) also criticized Democratic leaders for their handling of the negotiations.

"What kind of negotiation is it when you go from $3.4 trillion [in the House-passed HEROES Act] to $188 billion in new money?" the Vermont senator said, referring to the level of new funding in a bipartisan relief framework that served as a starting point for the current talks. "That is not a negotiation. That is a collapse."

The $900 billion package that could pass by the end of the week is nowhere near the level of spending that economists say is needed to relieve widespread suffering, bring the economy out of deep recession, and ensure a speedy and just recovery.

In a paper (pdf) released earlier this month by the Groundwork Collaborative, economists Dr. Mark Paul and Dr. Adam Hersh argued that "Congress needs to provide economic relief of between $3-4.5 trillion in the short-term in order to get American families and businesses working at their full potential."

"Whereas our estimate for needed economic relief would bring the economy in line with true full employment," the pair wrote, "falling short of this target will only widen the current health and economic crises."