Meet the Caltech physicist growing "designer snowflakes" in his lab

Why snowflakes look like they do is still poorly understood. Physicist Kenneth Libbrecht is trying to figure it out 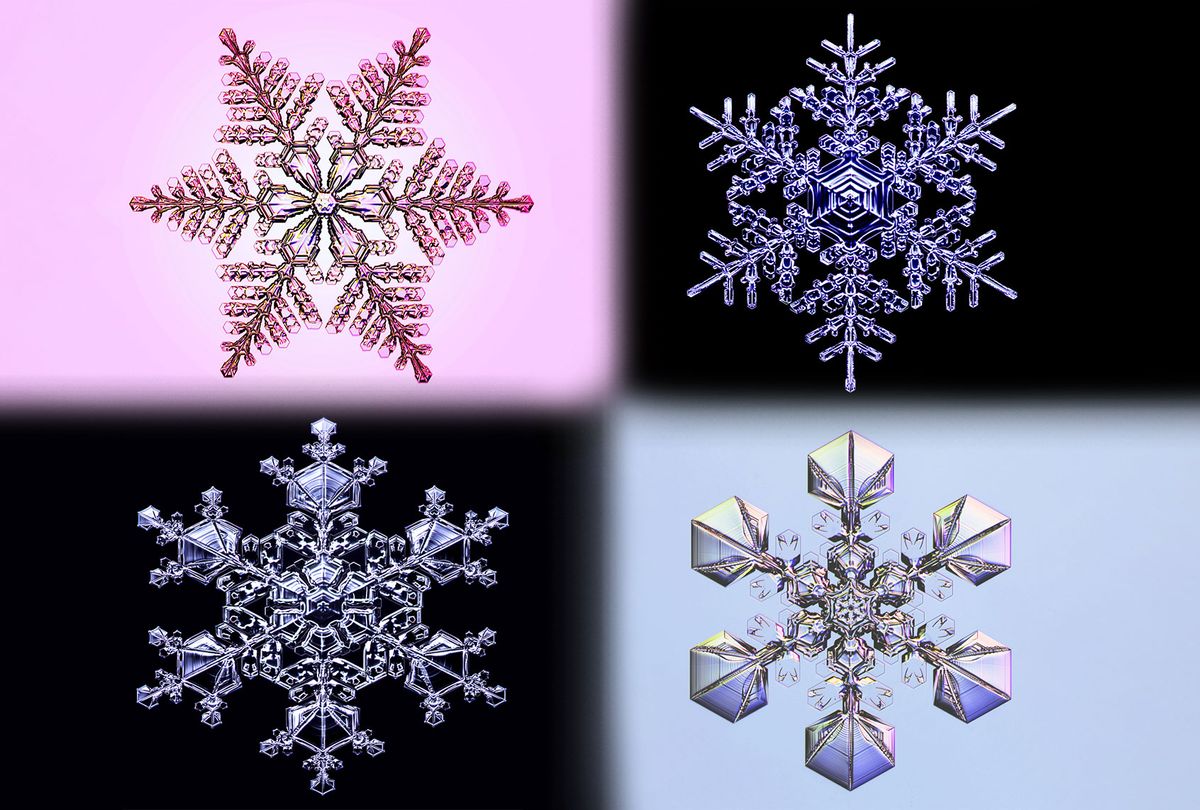 It wasn't until Kenneth Libbrecht moved to decidedly un-snowy southern California that he finally began to appreciate snow.

"I found it kind of funny that after I ended up as an adult and moved away from North Dakota that I finally understood what snowflakes were," Libbrecht said. "I'd never really looked at them much when I was growing up."

Libbrecht moved from North Dakota to Pasadena, California, to work in the department of physics at the California Institute of Technology. Originally trained as a solar astronomer, Libbrecht's research as a professor of physics and the department chairman over the last twenty years has focused on a variety of topics — from observing gravitational waves, to helieseismology (the study of the structure and dynamics of the sun) and snowflakes. Growing up on a farm outside of Fargo, snow was common in winter. But when Libbrecht started working at the California Institute of Technology, he grew more curious about ice crystals, — how they form, and their geometric intricacies.

Libbrecht's snowflake obsession began with an uncommon snowflake type called the "capped column." Strikingly different from the six-lobed snow crystals that don holiday decorations, capped columns resemble barbells in profile; Libbrecht describes them as looking like "two wheels and an axle." The columns of this specific snowflake form at 21 degrees Fahrenheit in the atmosphere, and then at five degrees Fahrenheit grow plates that form the wheel-like part of the crystal. This is Libbrecht's favorite ice crystal, in part because it is little-studied and rarely depicted in pop culture snowflake iconography.

For years, Libbrecht traveled to Ontario, Alaska, or Vermont in winter — locales chosen for being cold without being windy — to study snowflakes in the wild. Libbrecht would stand with a piece of foam board and wait to catch the snow crystals so he could preserve and study them. But, he says, such work is grueling, for reasons obvious and not.

"It's hard to find a really nice snowflake in the wild," Libbrecht said. "It's rough out there, there's wind and other particles bouncing around, crystals collide with one another, and so, they tend to get kind of beaten up, they don't always grow very large, and they're not always symmetrical."

It's true that no snow crystal — the technical term for a single snowflake — is the same, and that's because of the complex processes that turn an ice crystal into a unique, symmetrical shape. Starting high in the atmosphere, sometimes in clouds, a small formation of the snow crystal's plate begins. From there, branches or columns grow as it passes through different humidities and temperature changes as it moves through the air towards earth. The shape is determined by the path it takes to fall to the ground, and no two snowflakes take the same path. This all makes the formation of snowflakes grow a little differently.

Since, Libbrecht said, a lot of "bad stuff that can happen up in the clouds," he started growing his own snowflakes in a lab, called "designer snowflakes," to better understand how snow crystals form at a molecular level.

Amazingly, in the lab, Libbrecht has been able to make what he calls "identical-twin" snowflakes," by exposing the seed crystals to identical conditions.

But why would a physicist spend two decades, author several books, and do so much research on snowflakes? We sat down with Libbrecht to learn more. As always, this interview has been condensed and edited for print.

Why would a physicist be so enamored by snowflakes?

Well, it's part of physics — it's material science. The main thing that got me interested was, when you grow crystals in the air, you get these plate-like crystals, which are what people used to when they think of snowflakes. They think of the plate — we call it a flank — but they also grow in these columnar structures. You can think of it like a wooden pencil hexagonal column.

And this was one of the first things I learned when I started reading about this, was that there are a lot of different transitions from plates to columns with temperature. Plates grow at just below freezing, and then columns grow a little colder, and plates grow a little colder and then columns grow colder. Why it does that has been a puzzle for 75 years.

And so I started thinking well, surely we have to figure it out the physics of this. And you can, to some degree, but it's still a difficult problem because you're talking about what's going on at the molecular scale, and it's complicated. There are a lot of different effects, and my job as a scientist is just to try to figure some of that out.

So, in the lab, are you trying to create the perfect snowflake? Is there such a thing?

Well, it's not so much the perfect snowflake, but I do grow snowflakes in the lab in a variety of different ways. One thing I do is I grow very tiny, tiny snowflakes— smaller than a human hair — to study the growth. Those are very simple, you can make models of them, for a variety of reasons. The shapes are very simple, and you can more easily understand what's going on.

So I spent a lot of time making these teeny tiny little prisms. But at the same time, I also tried to make large stellar crystals. And this kind of branched out of the photography end. When you go outside and want to photograph snowflakes, especially the large stellar crystals — the holiday favorite — they're hard to find. You can't just go outside any old day. The temperature and other conditions have to be just right in order to find these exceptionally beautiful crystals.  You spend an awful lot of time sitting and waiting.

And it was a challenge to try to figure out a way to engineer a snowflake, if you will, but I worked on that for a while and figured out how to do it. After perfecting it for a while now, I can grow pretty nice-looking stellar crystals. And they are, in some ways, better than or more perfect than what you see falling out of the sky. Because the facets are very sharp in the lab, and I can make them with just exceptionally good symmetry, which is hard to find out in the wild.

I tried for a long time to find a really nice crystal in the wild, and I had some success with that. But I sort of gave that up when I started growing them in the lab, because the crystals in the lab are more perfect in a way, and I like that. I mean, I was driven somewhat to make the "perfect snowflake" if you will, but there's no single perfect snowflake. One of the fun things about growing in the lab is you can play around with it, changing the conditions as they grow. The temperature and humidity can change a lot.  I can change the conditions and explore what kind of conditions cause growth behaviors.

Are you working on this every week still? What is your end goal with creating these designer snowflakes?

I'm still working on it, and I have this apparatus that's designed for that. I don't run it all the time, but this whole thing is a bit of a side venture for me. It's in part an artistic venture, and I have artistic goals.

In terms of science, it's hard to do science with these ornate crystals; they're very complicated. The smaller crystals are easier to understand. Early on when I figured out how to do this I would put two snowflakes side by side that grew at the same time. And I'd call them "identical twins snowflakes'' because they end up looking very similar. In the lab I can expose two crystals to basically identical conditions and so they grow very similar. I call them identical twin snowflakes, because they're a little like identical twin people, in that they look very, very similar although not exactly the same.

There is no great application to understanding how ice crystals grow, and nobody pays me to do this. When I give a talk, I tell people their tax dollars are not being used for this.

Can you explain the process of growing a snowflake in the lab?

The first thing one needs is a source of cold. And I have a refrigerator for that. And it gets complicated in terms of the hardware, but it's just a cold chamber. And then I make these very tiny little crystals which are about the diameter of a human hair. These are very easy to make, and they're so small, you can't really handle them; they just float around in the air, and then I will take some of that air with these crystals floating in it, and sort of pass it over my cold substrate.  Everything's temperature controlled. Then some of these tiny crystals will fall on this piece of glass, and I will position that under the microscope. And then I will blow humid air onto that crystal and it will start to grow. Then I can change the temperature of the glass plate and I can change the temperature of the air that I'm blowing on, and then in the humidity in the air, and all of that will change how the crystal grows. I have these knobs to control all this because everything's electronically controlled.

And so, I will say I want to grow it at minus 15 degrees Celsius for a little while, and I'll do that, and then a couple of minutes later maybe I'll go to minus 17 for five minutes. Sometimes I'm randomly playing with it and sometimes I might have a plan.

And how long does this take?

Maybe a half hour to an hour, depending on what I'm growing.

It's amazing you've been able to do this.

To think that these things just spontaneously appear, that nobody's designing them up in the clouds, and that they just randomly happen, that is part of the interesting physics side of it. How do you spontaneously grow complex structures, just from nothing but air and water? And this kind of ties to biology, in a sense. I mean, how do you grow a brain from nothing? And happens all the time. This is a lot simpler than a biological thing, but, some of the underlying science is the same. I mean it's molecules interacting with one another, and crazy stuff can happen, and so it's kind of fun to figure out how and why.

Part of the magic of a snowflake is very clearly the symmetry. It's the combination of complexity and symmetry. It's easy to make simple symmetrical things, but something that's very complicated and yet still symmetrical — that kind of seems like magic.