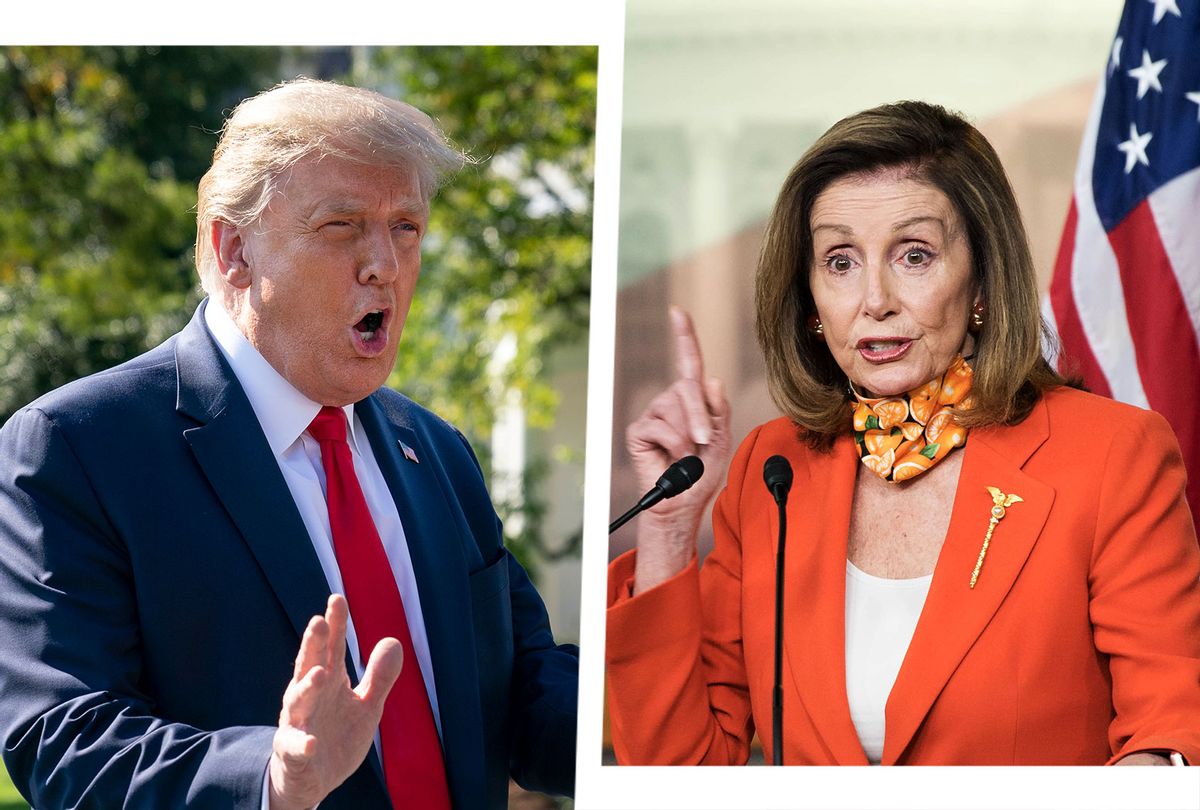 House Democrats quickly shot down President Trump's demanded changes to the coronavirus relief bill he held up for days before belatedly signing the legislation on Sunday — after a critical unemployment insurance extension expired.

Trump finally signed the $900 billion coronavirus relief deal and a $1.4 trillion omnibus bill while vacationing at his Mar-a-Lago resort in Florida after suddenly balking at the $600 stimulus checks and foreign aid included in the package. Though his own administration called for cutting the checks to $600 apiece, Trump called to increase the direct payments to $2,000 after the bill passed both the Democrat-controlled House and Republican-led Senate despite being absent from negotiations for months. The foreign aid included in the omnibus government spending bill that Trump called "wasteful" was also requested by his administration. Trump's delayed signing of the legislation resulted in lapsed unemployment benefits for about 14 million Americans while millions of others likely lost a full week of enhanced federal unemployment benefits included in the bill.

Trump said in a statement on Sunday that he signed the bill because the House of Representatives, which is controlled by Democrats, plans to vote on Monday on a bill to increase the direct payments to $2,000, even though the measure is opposed by his own party, and claimed that Congress has "promised" to review Section 230, a law that shields social media companies from liability for content posted on their platforms, and to "focus very strongly on the very substantial voter fraud" that he claims took place in the election despite no evidence and repeated rebukes from members of his own administration. The president also said that he is "demanding many rescissions" in the bill because "wasteful items need to be removed."

"I will send back to Congress a redlined version, item by item, accompanied by the formal rescission request to Congress insisting that those funds be removed from the bill," he said.

Though presidents can request changes by Congress they do not have the power to veto individual measures in bills they sign. The New York Times noted that the 25-day time frame for Congress to consider the requests will also extend past President-elect Joe Biden's inauguration and House Democrats have no plans to revisit the bill the president already approved.

House Appropriations Chairwoman Nita Lowey, D-N.Y., slammed Trump over his "shameful" delay of critical relief funding and for trying to "reverse funding his own administration requested and undo the careful bipartisan agreement he has just signed."

"The House Appropriations Committee has jurisdiction over rescissions, and our Democratic Majority will reject any rescissions submitted by President Trump," she said in a statement, adding that Congress plans to work on additional relief measures once President-elect Joe Biden takes office.

Politico's Jake Sherman noted that Congress has also been "reviewing" Section 230 for years and that it was highly doubtful that many Republicans in Congress would be interested in pursuing his baseless voter fraud claims. Meanwhile his demand for increased payments "will split the Republican Party on the way out the door" while his "redlined" changes stand zero chance of being approved, he added.

"What a bizarre, embarrassing episode for the president," Sherman wrote. "He opposed a bill his administration negotiated. He had no discernible strategy and no hand to play… If he was going to give up this easy, he should've just kept quiet and signed the bill. It would've been less embarrassing."

But the delay had significant real-world consequences. Because the president waited until Sunday night to sign the bill, about 14 million people laid off amid the pandemic lost a full week of benefits when they lapsed on Saturday. Michele Evermore, a senior policy analyst at the National Employment Law Project, pointed out that the delay also cut the number of weeks of enhanced federal unemployment benefits in the bill from 11 to 10, costing millions of others $300. It's unclear if the benefits could be paid retroactively.

"They might get it at the back end, but there are bills tomorrow," Evermore told the Times. "It's just so frustrating that he couldn't have figured this out yesterday. One day of delay is catastrophe for millions."

The delay may also push back the arrival of the stimulus checks, which Treasury Secretary Steven Mnuchin predicted would be sent out this week after the bill's passage.

"His stalling only intensified anxiety and hardship for workers and families who are collateral damage in his political games," House Ways and Means Chairman Richard Neal, D-Mass., said in a statement. "Now, people will need to wait even longer for direct payments and other vital assistance to arrive."

Trump said the Senate would "start the process" on voting for increased stimulus checks but Senate Majority Leader Mitch McConnell, R-Ky., did not even mention the payments in a statement on Sunday. The larger payments have long been opposed by many Republicans.

"I applaud President Trump's decision to get hundreds of billions of dollars of crucial Covid-19 relief out the door and into the hands of American families as quickly as possible," McConnell said in a statement.

House Speaker Nancy Pelosi, D-Calif., who along with many Democrats quickly endorsed the president's demand for larger checks that his own party opposed, said the president "must immediately call on Congressional Republicans to end their obstruction" and support the increased payments during a floor vote on Monday.

"Every Republican vote against this bill," she said in a statement, "is a vote to deny the financial hardship that families face and to deny the American people the relief they need."