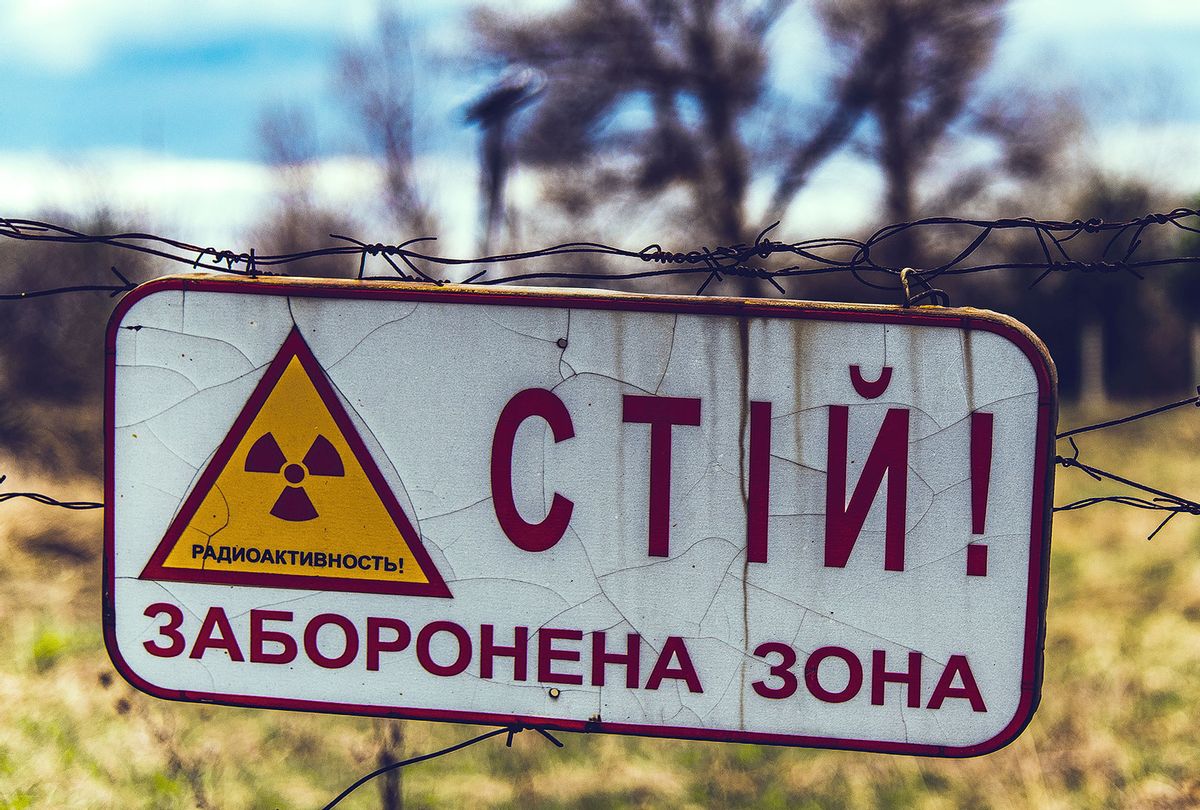 A sign warning of radiation, taken in Pripyat, Ukraine, April 2017. OVER 30 years after the nuclear disaster of Chernobyl, the city of Pripyat is exactly as it was the day it was evacuated. On the afternoon of April 27, 1986 a population of almost 50,000 abandoned the city following a catastrophic nuclear accident. (Andreas Jansen / Barcroft Media via Getty Images)
--

In 1986, a reactor accident at the Chernobyl Nuclear Power Plant in Ukraine led to an uncontrolled nuclear chain reaction that is still considered to be the worst nuclear disaster in history. The fallout from the Chernobyl explosion has made hundreds of square miles around the now-uninhabited town a veritable dead zone, void of humans.

Now, a Ukrainian dredging company, Sobi, is doing construction work in the Chernobyl area that some experts warn could cause more people to get sick and spread radioactive waste.

Specifically, Sobi has been dredging the Pripyat, a river that runs past the Chernobyl reactor, in order to create an inland shipping route, according to The Guardian. Groups that attempt to protect the public from nuclear radiation, such as the International Atomic Energy Agency, have warned that the dredging could cause radioactive sludge from the 1986 disaster to leach into the drinking water consumed by 8 million Ukrainians. Other NGOs, including the World Wildlife Fund and BirdLife, have accused the Ukrainian government of breaking the law by allowing the dredging despite not performing an environmental impact statement, which is mandated by Ukrainian regulations.

Despite these concerns, Sobi has continued with its work since July.

"The fact they want to build a dam and have boats going just by the bottom of the Chernobyl reactor – for me this is unbelievable," Dr David Boilley, a nuclear physicist and chairman of a French NGO that monitors radioactive pollution, told The Guardian. "This is the most contaminated part of the exclusion zone." A Sobi manager told The Guardian that "analysis showed that the work can be done safely."

The waterway in question would stretch from the Polish city of Gdańsk to the Ukrainian city of Kherson and would have roughly 25 times the length of the Panama Canal, according to ZME Science. One organization, Save Polesia, argues that the Polesia natural region would experience landscape damage and dried up rivers if the dredging continues as planned. They also expressed concern about its impact on wildlife and that local communities which depend on "Europe's Amazon" would likewise suffer.

The area around Chernobyl has already suffered environmentally in recent years. In April 2020 a series of wildfires broke out in the Chernobyl Exclusion Zone, stirring up radiation and increasing air pollution in the capital city of Kyiv until it became among the worst in the world. Although wildfires are a common occurrence in the woods from that region, the April wildfires were unusually large, raising concerns that they could spread radiation through the wind. Later in April, however, the International Atomic Energy Agency said that radiation from the fires presented "no risk to human health."

Paradoxically, wildlife has flourished in the Chernobyl Exclusion Zone since humans vacated the region after the disaster. Many endangered and exotic animals, including lynx and wolves, now take residence in the radioactive forest around Pripyat. Some scientists speculate that this may be because humans actually have a more detrimental effect on wildlife numbers than high radiation levels.