Officials aimed to vaccinate 20 million people by the end of the month. Only 2 million have been vaccinated 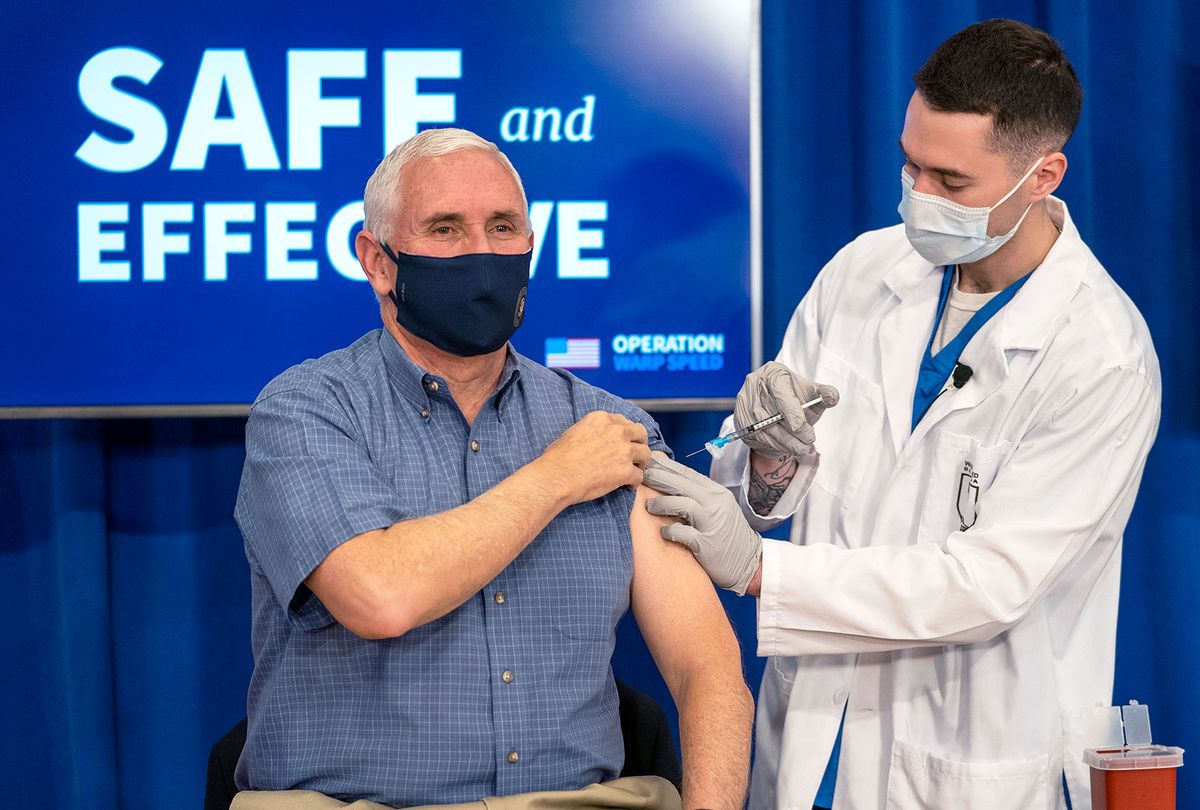 U.S. Vice President Mike Pence receives a COVID-19 vaccine to promote the safety and efficacy of the vaccine at the White House on December, 18, 2020 in Washington, DC. (Doug Mills-Pool/Getty Images)
--

The Trump administration officials heading up Operation Warp Speed acknowledged that the coronavirus vaccine rollout has been slower than expected and that it was "unlikely" to meet its goal of 20 million vaccinations by the end of the month.

The process has been "slower than we thought it would be," Dr. Moncef Slaoui, who is heading up the administration's efforts to speed up vaccine production and distribution, told reporters during a press conference last week, adding that the goal of 20 million two-dose vaccinations is "unlikely to be met."

The Trump administration has repeatedly said that it aimed to vaccinate 20 million Americans by the end of the year. About 2 million people have been vaccinated through December 28, according to the Centers for Disease Control and Prevention, though administration officials say there is a lag in the data.

"By the end of December, we expect to have about 40 million doses of the [Pfizer and Moderna] vaccines available for distribution," Health and Human Services Secretary Alex Azar said last month. "Enough to vaccinate 20 million of our most vulnerable Americans."

Slaoui told reporters earlier this month that the Trump administration's efforts to bolster vaccine production "allow us to feel confident that we will be able to distribute enough vaccine to immunize 20 million people in the US in December, that's 40 million doses."

Slaoui admitted last week that the process of getting "shots in arms" has been slower than expected and "the commitment that we can make is to make vaccine doses available."

But Gen. Gustave Perna, the chief operating officer of Operation Warp Speed, said during a press conference last week that only half of the promised doses would actually be distributed to states by January.

Perna, who is charged with overseeing the logistics of the vaccine rollout, said that the government had done a "good job so far" of distributing the Pfizer and Moderna vaccines but admitted that there have already been problems.

"We have had a handful of packages that we tried to deliver that were not destined for the right place, but we captured them before they were dropped off and we rerouted them to the right place," he said. "And we had a couple of ... shipments that did not go out on the right day."

Perna previously said that there were also temperature issues with thousands of doses of Pfizer's vaccine, which has to be stored at around minus 70 degrees Celsius.

State officials around the country have also complained that their vaccine allocations had been abruptly slashed earlier this month. Pfizer said it had millions of doses sitting in warehouses just waiting for delivery instructions.

Perna told reporters that he takes "personal responsibility for the miscommunication" with state governments.

"There is a delay between what is available and what is releasable," he said, "because we're talking about hundreds and thousands and millions of doses that we want to make sure are right."

"We all made the error or mistake of assuming that vaccine that's actually produced and being released is already available for shipment, when, in fact, there is a two-days lag between the time at which we generate a lot of data that shows this vaccine vial is actually safe and right and the time we can ship it," Slaoui later told CNN.

"The FDA has to receive certain documentation," he added. "And that's really where that lag period has resulted in differences in between what was in the plan and what was actually done. I think we have addressed that."

Stephen Hanh, the head of the Food and Drug Administration, said that Pfizer and Moderna are required to "submit Certificates of Analysis for each lot at least 48 hrs prior to vaccine distribution" but they "can distribute without waiting for the FDA's ok."

State officials have also warned that Trump's delay of the coronavirus relief bill, which he finally signed on Sunday, also prevented billions in funds for vaccine distribution from being allocated.

"Every minute of delay impacts how many people can get the vaccine and when," Adriane Casalotti of the National Association of County and City Health Officials told CNBC.

Pfizer also said that the Trump administration turned down the chance to buy an additional 100 million doses for next spring, though the company later said it reached a deal that would require the administration to invoke the Defense Production Act to boost the company's manufacturing capacity after months of resistance from the White House. Using the Defense Production Act, a wartime law that allows the president to require companies to aid with production necessary for national security, will allow Pfizer to secure enough raw materials to produce up to 100 million more doses by July, the company said. Pfizer previously slashed its estimated production by the end of the year in half due to raw material shortages.

President-elect Joe Biden will invoke the Defense Production Act to "make sure the personal protective equipment, the test capacity and the raw materials for the vaccines are produced in adequate supply," Dr. Celine Gounder, a member of Biden's coronavirus advisory board, told CNBC on Monday.

Sen. Chris Murphy, D-Conn., who sits on the Senate committee that oversees public health, said that he and other Democrats have tried to "press the Trump administration to fully invoke the DPA" for nine months.

"They refused, likely to protect private industry profits," he tweeted. "There is so much low hanging fruit like this to make our COVID response better."