The House voted to increase payments to $2,000 on Monday despite GOP opposition to Trump’s demand 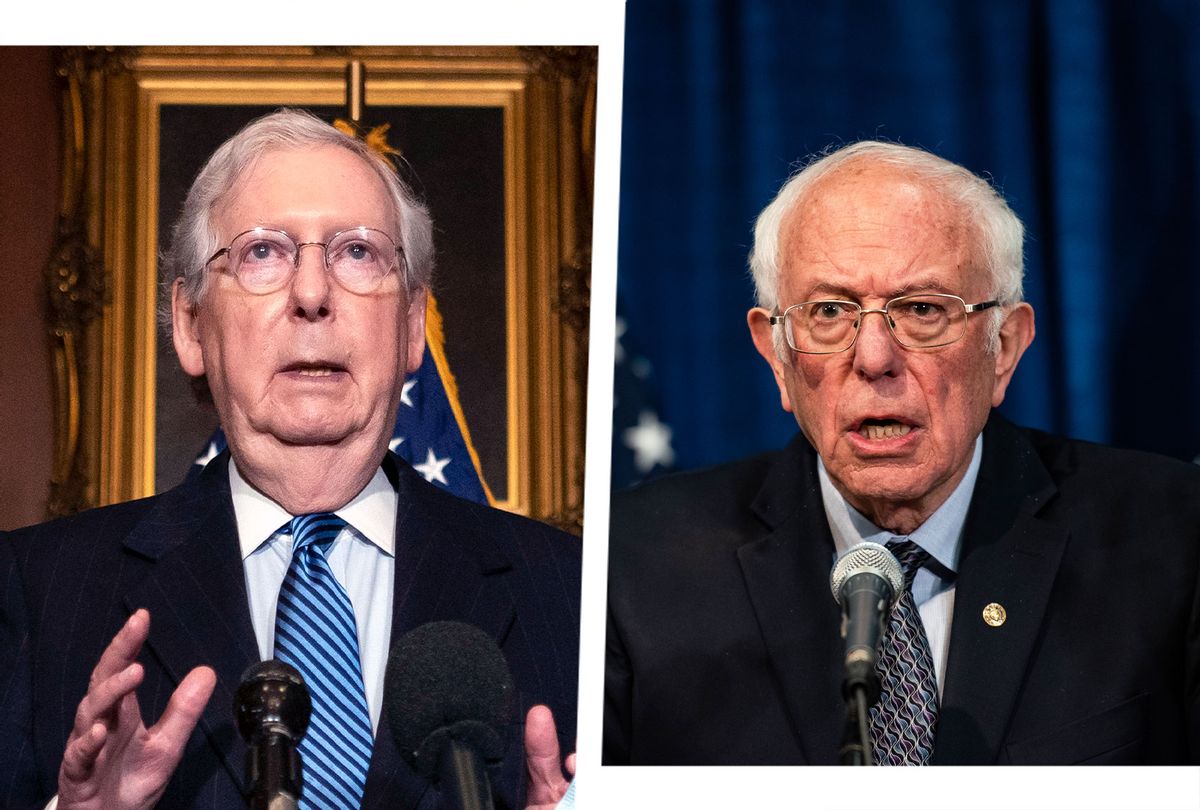 The Kentucky Republican first objected when Senate Minority Leader Chuck Schumer, D- N.Y., called for the Senate to vote on both the defense bill veto override and the $2,000 payments. McConnell then again objected when Sanders asked for a vote on the direct cash payments after the Senate's planned override of President Trump's veto of a must-pass defense policy bill on Wednesday.

The House voted 275-134 on Monday to increase the $600 payments in the $900 billion coronavirus relief bill to $2,000. Nearly every Democrat supported the measure but 130 of 174 Republicans voted in opposition despite Trump's demand to increase the payments. The House also voted 322-87 to override Trump's veto of the $740 billion National Defense Authorization Act. Trump rejected the defense spending bill last week because it included a measure to remove Confederate names from military bases and did not include an entirely unrelated repeal of Section 230, a federal law that shields social media companies from liability for content posted on their platforms.

The two votes marked significant defeats for Trump at the hands of his own party. Most Republicans opposed the president's demand for higher payments and the NDAA vote marked the first time the House overrode his veto, with ample Republican support. The Senate appears poised to override his veto as well but Sanders vowed to filibuster the move unless McConnell allows a vote on the $2,000 payments.

"McConnell wants to vote to override Trump's veto of the $740 billion defense funding bill and then head home for the New Year. I'm going to object until we get a vote on legislation to provide a $2,000 direct payment to the working class," Sanders said in a statement. "Let me be clear: If Senator McConnell doesn't agree to an up or down vote to provide the working people of our country a $2,000 direct payment, Congress will not be going home for New Year's Eve. Let's do our job."

Sen. Ed Markey, D-Mass., said he would join Sanders in blocking the veto override to "get the American people the help they need."

Trump shared a tweet about Sanders' plan on Tuesday and endorsed the Democratic-backed bill.

Trump, who was absent through nine months of negotiations, previously threatened to reject the $900 billion relief bill, calling the $600 payments a "disgrace" even though they were pushed by Treasury Secretary Steven Mnuchin. He ultimately signed the bill on Sunday, though the delay cost millions of unemployed workers a week's worth of critical aid.

While the senators cannot prevent the veto override, they could delay the vote until January 1.

"We can force the Senate to stay in session until the New Year," Warren Gunnels, a top Sanders aide, said on Twitter. "This is no bluff."

A source close to Sanders told Politico that the Senate races in Georgia "were a factor in his decision" as the move could keep Sens. David Perdue, R-Ga., and Kelly Loeffler, R-Ga., off the campaign trail ahead of their January 5 runoffs. The two Republicans came out in support of the increased payments on Tuesday after spending months opposing the second round of relief.

"The American people are desperate, and the Senate has got to do its job before leaving town," Sanders told the outlet. "It would be unconscionable, especially after the House did the right thing, for the Senate to simply leave Washington without voting on this."

Sanders noted that a recent poll showed that 78% of voters, including 73% of Republicans, support $2,000 stimulus payments.

"Every Senate Democrat is for this much-needed increase in emergency financial relief, which can be approved tomorrow if no Republican blocks it – there is no good reason for Senate Republicans to stand in the way," Schumer added in a statement. "Leader McConnell ought to make sure Senate Republicans do not stand in the way of helping to meet the needs of American workers and families who are crying out for help."

McConnell has not said whether he would bring the bill to the floor but he did say on Tuesday that he will work Trump's wish list into a new bill. It's doubtful that the standalone bill for $2,000 checks would garner the 13 Republican votes it needs to pass the Senate after the vast majority of the House GOP voted against it. Sen. Roy Blunt, R-Mo., a member of McConnell's leadership team, previously said that it was unlikely the Senate would reopen a bill it already passed and predicted last week that the bill for increased cash payments has no chance of passing the Republican-controlled Senate and likely would not even come to a vote.

Sen. Marco Rubio, R-Fla., said on Monday that he would support the $2,000 payments and Sen. Lindsey Graham, R-S.C., said it was a "reasonable demand." Sen. Josh Hawley, R-Mo., who joined Sanders to push a bill that would increase the payments to $1,200, has not said how he would vote. Sen. Pat Toomey, R-Pa., said he would oppose the bill and Sen. Ron Johnson, R-Wis., who blocked the Sanders-Hawley bill, is likely to vote against the increase as well.

"Essentially what they believe is the economy will fix itself," House Majority Leader Steny Hoyer, D-Md., said Monday.

"Republicans have a choice: vote for this legislation or vote to deny the American people the bigger paychecks this need," said House Speaker Nancy Pelosi, D-Calif. "To reject this would be in denial of the economic challenges that people are facing and it would deny them, again, the relief they need."