The final, desperate days of our psychopath in chief: How bad will it get?

Our pathological president is sunk in worsening delusion, with three weeks to go. And none of this had to happen 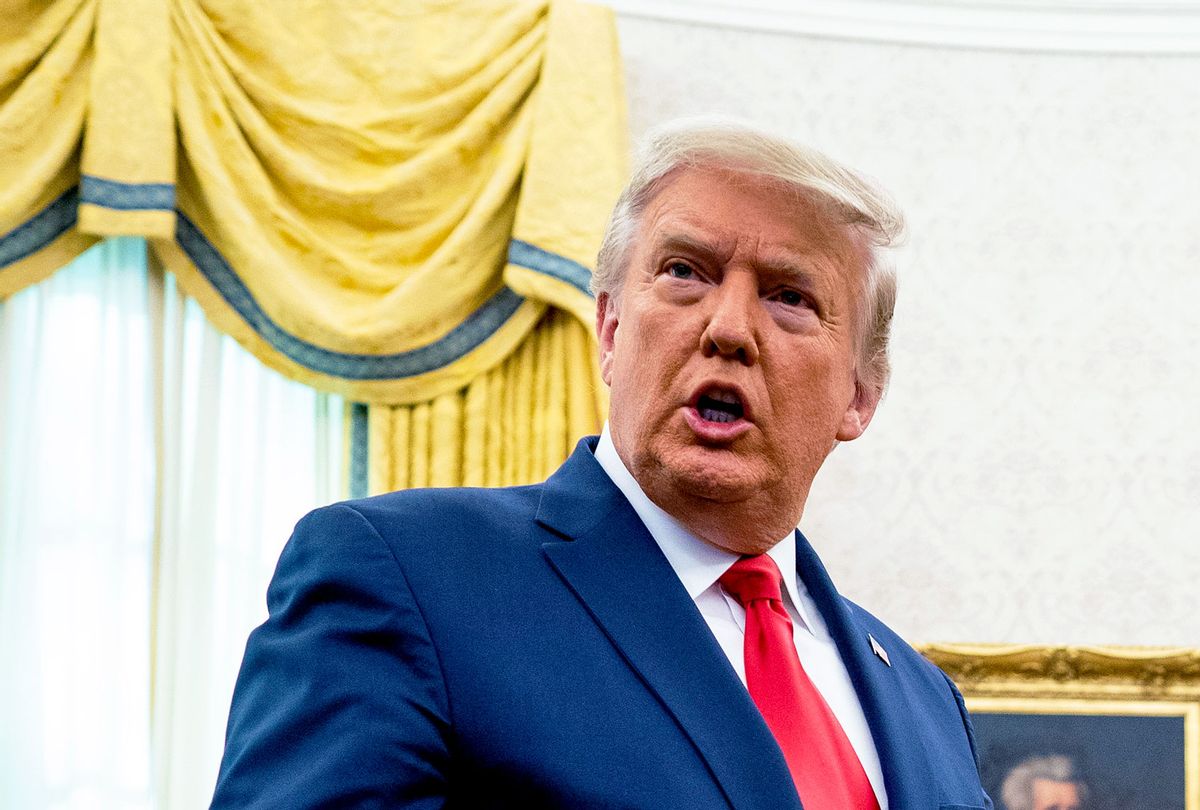 We must face the alarming truth. Our irrational and reckless president will spend his last 23 days in office harboring the hope that a military coup in our country will allow him to remain in power. Or that Congress will overthrow the Electoral College vote on Jan. 6. Donald Trump is totally preoccupied with his existential survival as the walls of reality are closing in on him. He has been repudiated in the election. His psyche cannot comprehend how he could have lost to such an ordinary, mortal man. He is beside himself with embarrassment and humiliation. He is driven by revenge. He wants to settle scores. His thin veneer of greatness and superiority is crumbling away. He is desperate and flailing.

Trump is a psychopath. He has all the defining characteristics in spades: narcissistic, sadistic, antisocial, paranoid. This is malignant psychopathology in the embodiment of our president. He has the kind of personality pathology that should be unacceptable in our top public servant. Trump should have been rooted out in 2016. A psychopath should never have been elected to the highest office in the land. We have been suffering for it ever since: division, tribalism, hostility, racism, xenophobia, terrorism and more.

Some mental health professionals voiced concern about Trump's mental health after his election in 2016. In late 2017, 37 mental health professionals described Trump's dangerousness and unfitness in a bestselling book, "The Dangerous Case of Donald Trump." But the publication of that book did not open the floodgates for mental health experts to voice their opinions in the media. In fact, there was considerable pushback from concerned colleagues. Plus, the mainstream media showed a rather strong allegiance to the antiquated "Goldwater rule" advanced by the American Psychiatric Association. Mental health experts were largely rebuffed by the media. As a result, the public was ill-informed and Donald Trump was elected.

Four years later, Trump was defeated by Vice President Joe Biden in November 2020, but not with the help of the mainstream media. Once again, the media buckled under the smothering influence of the Goldwater rule. Journalists' descriptions of Trump's pathology were published in the media, but experts themselves were muzzled. The primary exception, in fact, was Salon, which published commentary from a number of mental health professionals leading up to the November election and did not shy away from exposing the disturbing features of Donald Trump.

So here we are. Twenty-three days to go, and we are all sitting on the edge of our seats waiting for the next dreadful and unimaginable act from this disordered man. Our Constitution states that we are to have a peaceful and orderly transition of power to the next president. But we should not be surprised by Trump's desperate attempts to save himself by throwing democracy under the bus. Once and for all, we should be convinced that our psychopath in chief does not give a damn about the preciousness of our democratic way of life.

Trump is now totally consumed with his survival, his self-preservation. He cares about nothing else. He has totally abdicated his role as president. He is preoccupied with his anger, his grievances, his conspiracy theories and his conniving plans. He is a man on a mission to save his power and his pride simultaneously. It is a mission borne out of utter contempt for the will of the people.

He is willing to use corruption and seditious behavior to subvert democracy for his personal gain. He is trying to find the right conspiracy theory or voter-fraud narrative that will allow him to hang onto power. He does not understand why the guardrails of democracy are deterring him. He cannot fathom why the U.S. Supreme Court has not come to his rescue, especially after he has appointed three "Trump" associate justices. He does not treasure democracy. If anything, he sees it as an annoying obstacle to his goal of establishing a family dynasty. He wants to be a dictator or, better yet, a king.

He has turned his back on the thousands of Americans who are dying each week from the coronavirus. He has not mentioned the pandemic in weeks. He has not listened to a public health expert in months. He does not pay tribute to our fallen Americans. He has washed his hands of all responsibility for our pathetic response to this once-in-a-century national emergency. He is pretending that the coronavirus is gone, much as he pretends that he is smart and great and strong. He seems to derive a kind of sadistic pleasure from watching Americans die under his direction. He must see himself as the master of misery. Remember it was Trump who shut down a U.S. Postal Service plan to mail masks to all Americans. He also shut down mass testing and trace contacting.

Trump has abandoned the economic mess he caused. He did not lift a finger in the negotiation and passage of the new COVID relief bill, held it hostage for a couple of days for the drama of it all, and finally signed it. His erratic behavior has cost millions of Americans one week of their unemployment benefits. He acts as if the economy is humming along well when, in fact, we have had a net loss of 11 million jobs during the pandemic. More than 100,000 small businesses have closed permanently since March. He has not had a concrete plan for restoring the country's economy. Such a plan is not possible while the coronavirus is still surging in infections and deaths. To this day, he will not acknowledge the interconnectedness of the pandemic with our collapsed economy. And our economy is getting worse, not better.

His paranoia is raging as his desperation mounts. Trump is lashing out against even his most ardent apologists. He is accusing others of disloyalty and abandonment. He asked for Joe Biden to be arrested weeks before the election. He always sees himself as the victim when he is exposed or challenged or cornered. To be sure, his victimhood is both inaccurate and disingenuous. He is never the victim. He is always the one who is aggressive, cruel and reckless. His victimhood is a cynical psychological ploy to garner sympathy from his supporters and to try to wriggle out of a jam. But this jam is too much for him: He has lost the election fair and square, he has been abysmal in his handling of the pandemic and the economy is in dire shape. This trifecta cannot be overcome.

Trump is now issuing a spree of sleazy pardons. He has pardoned two people who lied to the FBI during the Mueller investigation, two corrupt ex-congressmen, and four war criminals who were involved in a 2007 massacre of civilians in Iraq. A few days ago, he pardoned his son-in-law's father and two of his closest associates (Roger Stone and Paul Manafort). Trump has always been aligned with criminal friends and associates. Psychopaths are attracted to other psychopaths. They have a shared lack of conscience and an obvious absence of shame. This is the president who put young children in cages at the border and now has pardoned murderers — a glimpse inside the hollow heart and soul of Donald Trump.

If Trump pardons his children and himself during the next three weeks, it will be a clear confession of wrongdoing by the psychopath in chief. Innocent presidents do not need to pardon themselves or their family members. A pardon is intended to absolve criminal actions. It would prove that Trump's victimhood is pure mythology.

Let us not forget Trump's unrelenting adulation of Russian President Vladimir Putin. He has recently turned a blind eye to Russia's massive cyberattack on our country. Trump has consistently put Putin's interests above ours. Two psychopaths in collusion will be the confirmed story.

Trump has been grifting nonstop since his election defeat in November. He has received more than $220 million in donations from his supporters, under the guise of fighting election fraud. In truth, the money will be used to pay off his campaign debt and to fund his PAC. It will be his personal piggybank. He is fleecing his supporters, and they do not seem to notice or care. Grifting others is Trump's only natural skill. But it is hardly the makings of a president who deserves to be on Mount Rushmore.

Trump still finds time to play golf on weekends and holidays. Nothing will stop that — not even a car bombing in downtown Nashville on Christmas Day. He would never let responsibility or care for others interfere with his pleasure at taxpayer expense ($151 million and counting). He has no understanding of how pathetic he looks on the golf course while thousands of Americans are struggling to take their last breaths or standing in food bank lines because they have been unemployed since March. A chance to cheat at golf while the country is not looking is way too much fun for him to pass up.

Trump is on a collision course with self-destruction. He is the Titanic and everyone around him is beginning to jump ship. Former Attorney General Bill Barr has jumped ship. Evangelist Pat Robertson has jumped ship. Senate Majority Leader Mitch McConnell has jumped ship. Even Vice President Mike Pence has one foot in the water. It is just a matter of time before Trump wakes up in an empty room of silence and gold toilets.

Republicans must accept their share of blame for their complicity with this destructive president. At any point along the way they could have found their collective voices and stopped him. Their party is teetering on the brink of irrelevance if they do not separate themselves from Trump. They have a chance to begin that separation on Jan. 6 in Congress when they refuse to participate in Trump's demand — fueled by bribes and threats — to reject the Electoral College results.

Because loyalty is a one-way street for Trump, he will end up alone. He will still have his children and his son-in-law, of course — they are stuck with him. But one or all of them may turn on him when criminal charges are finally filed. Before it is over, Trump's closest friend may be his cellmate.

Democracy will prevail. Trump will be gone on Jan. 20. He will not attend Joe Biden's inauguration because he cannot tolerate the embarrassment of his loss. He cannot even fake humility and kindness for an hour or two for the good of the country. He will slither away through the back door of the White House, all the while proclaiming victory and affirming his exalted status as the best president ever. After all, he has to maintain his "idealized self" of indispensable greatness.

Historians will be extremely unkind to Trump. He will be seared by presidential scholars. He will deserve all their harshness and condemnation. He will likely be remembered as the worst president in U.S. history. His legacy will be one of incompetence, cruelty and corruption. If he thinks he is humiliated now, wait until his supporters wake up and finally reject him for being such a failed, miserable and treasonous leader.

Hopefully, Donald Trump will be our one and only psychopath as president. We must not put ourselves through this national anguish and darkness again. Above all else, we must make sure the deaths of tens of thousands of Americans teach us an unforgettable lesson.