Masks in the mail: The pandemic inflection point that might have been

The White House stopped the Postal Service from sending masks to every American household. How many people died? 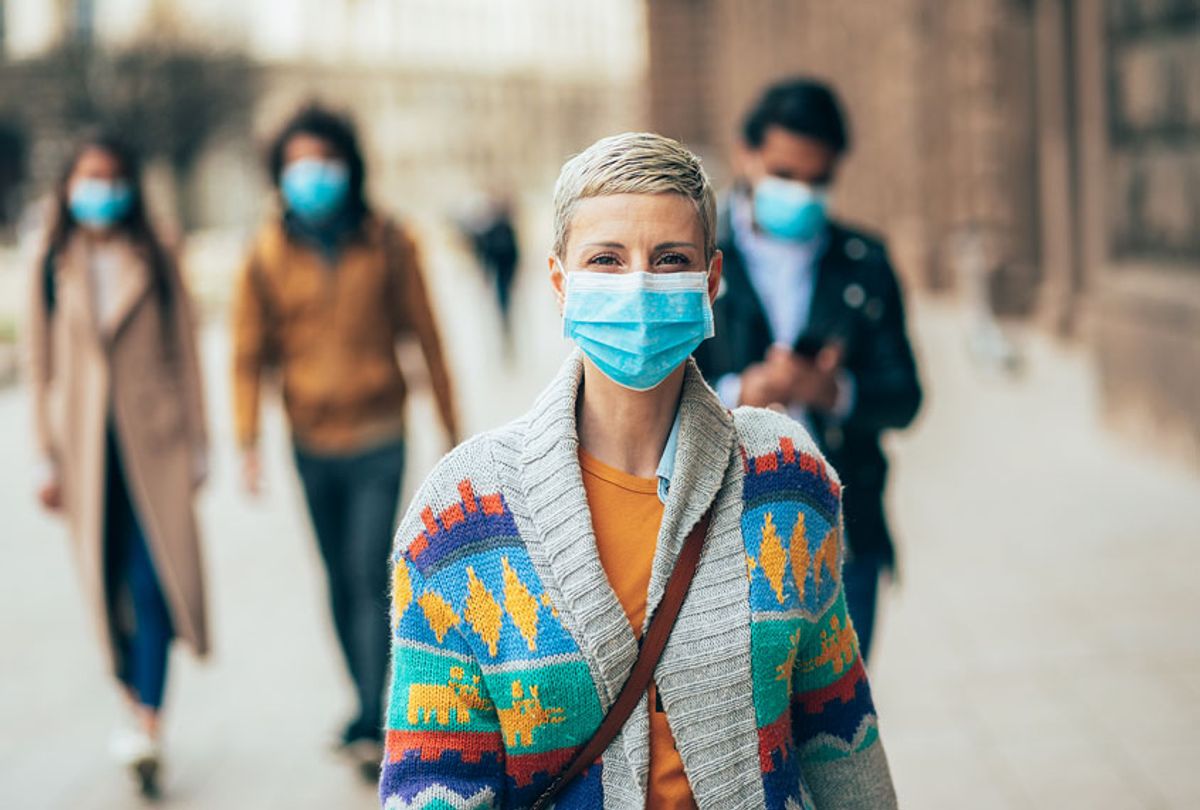 There are so many ways that Donald Trump has fallen short in his response to the COVID-19 pandemic — so many things he could have done differently that would have saved countless lives. Most of them, however, were never even remotely possible because of his appalling character flaws and the complete lack of a rational White House decision-making process.

That's why this one really stings: The U.S. Postal Service, it turns out, was about to send five face masks to every household in America — in April! — until someone at the White House nixed it. They even had a draft press release ready to go.

I can't think of any one act that might have changed the pandemic timeline more than that — and we were so close!

The Washington Post disclosed — but underplayed — this astonishing might-have-been on its website last Thursday morning, mentioning it six paragraphs into an article that was more generally about thousands of pages of Postal Service emails and other documents obtained under the Freedom of Information Act by the watchdog group American Oversight.

But the story wasn't even on the front page of the Post the next morning, and there's been no follow-up. A few other news organizations essentially rewrote the Post story for their own websites. And a few journalists have listlessly inquired about it, to no avail. The New York Times and the Associated Press seem to have ignored it completely.

Most significantly, no one has determined exactly who, and under what sort of pressure, killed the plan and along with it — I don't think this is hyperbole — tens of thousands of Americans.

I don't think there's a bigger story right now than Trump's ineffective, incoherent, willfully ignorant, flimflam-filled response to this deadly crisis. I think the mainstream press has allowed him to duck anything like real accountability for it and should be ceaselessly freaking out that he continues to do almost nothing about it.

I mean, imagine an alternate past in which the government reached into every household in America and handed them five face masks — five months ago! — with the implicit message that they should use them.

Tony Romm, Jacob Bogage and Lena H. Sun broke the story for the Post — under the anodyne headline "Newly revealed USPS documents show an agency struggling to manage Trump, Amazon and the pandemic."

Eventually, they wrote about this:

At one point in April, USPS leaders drafted a news release announcing plans to distribute 650 million masks nationwide, enough to offer five face coverings to every American household. The document, which includes quotations from top USPS officials and other specifics, was never sent.

Before the news release was sent, however, the White House nixed the plan, according to senior administration officials, who spoke on the condition of anonymity to share internal deliberations ….

"There was concern from some in the White House Domestic Policy Council and the office of the vice president that households receiving masks might create concern or panic," one administration official said in response to the scrapped mask plan.

The Post reporters uncritically accepted Health and Human Services and White House claims that most or all of the masks were instead distributed by Project America Strong "to critical infrastructure sectors, companies, healthcare facilities, and faith-based and community organizations across the country." But a Yahoo News report in July disclosed that the project had run out of masks as of July 1, after distributing fewer than 350 million.

As the Post noted, there was a sketchy contemporaneous report of the plan, in early April, by Axios reporters Caitlin Owens and Jonathan Swan. They described a possible "partnership in which Hanes and Fruit of the Loom manufactured millions of cloth face masks and the U.S. Postal Service would have helped deliver them." They reported that it was championed by Robert Kadlec, the assistant secretary for preparedness and response at HHS, and supported by deputy national security adviser Matthew Pottinger. But "[s]everal senior officials opposed the idea, questioning its practicality," they wrote. And they quoted a "source familiar with the situation" saying the plan was "dying a slow death."

Since the Post story came out, ABC News, CNN, People and the Daily Beast have all taken note, but failed to advance it.

Trump was asked about it during his appearance in the briefing room on Friday, but ducked and segued into a critique of the Postal Service in general — and there was no follow-up:

Q: The Postal Service had planned on sending 650 million face masks to Americans back in April.  That never happened. Why not? And was it because you were —

Q: Were you running —

Trump: That's run — as you know, that's run by a commission, and they run it. I think, frankly, if they would raise the price of packaging, you'd end up making a lot of money, or breaking even, or doing something ….

On "Meet the Press" on Sunday, NBC's Chuck Todd got HHS Secretary Alex Azar to essentially confirm the story, but moved on without getting him to advance it:

Todd: Mr. Secretary, I want you to see if you can clear something up for us. As you know, there was that report this week due to a Freedom of Information Act request. We got a copy of a press release that the United States Postal Service was going to be sending out in April, that said in conjunction with your agency, HHS, there was going to be up to 650 million reusable masks sent to the hardest-hit areas. And then the implication was the White House decided against this. ... [E]ventually the masks were sent to various organizations, but the White House decided to nix the idea of mailing masks essentially to the American people. Was that a mistake?

Azar: Well, Chuck, I'm actually glad you asked about that. You know, thanks to the incredible foresight of Dr. Bob Kadlec, our assistant secretary for preparedness and response, in the early days of the pandemic we worked with Hanes and other clothing manufacturers to retool their equipment and actually start pumping out these reusable cloth face masks. And we distributed 650 million of those to the hardest hit areas. At one point, we thought about shipping them to every American through the Postal Service, but the decision of the task force, instead, was send them where they can be used most, to the hottest, most active areas. So we got 650 million masks out. It was just through a different mechanism, getting them where they're needed most. And we just recently got about 60 million face coverings, these cloth face coverings in a smaller size, out to kids especially in schools in underserved areas.

Todd: Well, one of the assets of sending masks to everybody would have been it would have sent the message that masks are important, at a time when the president was disputing whether he should be wearing a mask.

Azar: Well, Chuck, we got 650 million masks out to where they're needed most. I think that's what matters. Get them to the hot spots and get them where they can add the absolute most value. And you know, we've been calling for the use of face coverings since the middle of April when the president put out his guidelines for reopening America.

CNN's Jake Tapper did not bring up the topic in his interview with White House virus task force member Adm. Brett P. Giroir, on "State of the Union." Tapper did however, give Giroir a necessary lecture:

The most powerful person in this country is constantly undermining your message about mask-wearing. You need to convince him to change that message, because one of the reasons spread continues is because people are not respecting the words you are saying, words that I think are very important.

Trump's defenders frequently point out that Dr. Anthony Fauci, the nation's leading expert on infectious diseases, initially waved off public mask use — as he did, for instance, in an interview aired on "60 Minutes" in March, evidently motivated by the legitimate concern that health care workers might face a shortage.

But by early April, the White House coronavirus task force and the Centers for Disease Control and Prevention were both formally recommending that people wear masks. The Surgeon General even made a video showing how to make your own.

Mask use, nevertheless, remained at minimal levels for weeks longer, and has never approached full saturation.

Part of the initial problem was a lack of supply — which obviously would have been alleviated by the Postal Service plan. Part of it was also cultural resistance, which might have been alleviated by everyone's neighbors having masks too. And part, of course, was Trump's continued personal resistance to mask-wearing — which might have been at least a bit offset by such a concrete measure as the neighborhood letter carrier sticking some through your mail slot.

Instead, it took three months — until July 11 — for Trump himself to wear a mask in public, for large retailers like Walmart to require masks and for usage to really tick up.

One expert estimate is that masks reduce the risk of transmission by at least one-third. I'm no epidemiologist, so I can't translate that into number of lives lost. But it's got to be a lot.

For comparison, the Institute for Health Metrics and Evaluation estimates that between now and the end of this year, increasing mask use to the levels seen in Singapore (95 percent) "would decrease the cumulative U.S. death toll to 298,589, "or 116,501 lives saved compared to the reference scenario."

Similarly, CDC director Robert Redfield just last week told senators that the coronavirus could be controlled in six to 12 weeks if all Americans wore masks. He called face coverings the most "powerful public health tool we have … more guaranteed to protect me against COVID than when I take a COVID vaccine."

Meanwhile, in this timeline, Trump continues to mock people who wear masks, and continues to make utterly ridiculous statements about their effectiveness. Last week, during an ABC News town hall with George Stephanopoulos, for instance, he let loose with this bizarre screed:

Stephanopoulos: Who are those people?

Trump: I'll tell you who those people are — waiters. They come over and they serve you, and they have a mask. And I saw it the other day where they were serving me, and they're playing with the mask. … I'm not blaming them. … I'm just saying what happens. They're playing with the mask, so the mask is over, and they're touching it, and then they're touching the plate. That can't be good.

How different would everything have been if someone at the White House hadn't blocked this plan? We'll never know, and it's a crushing tragedy.