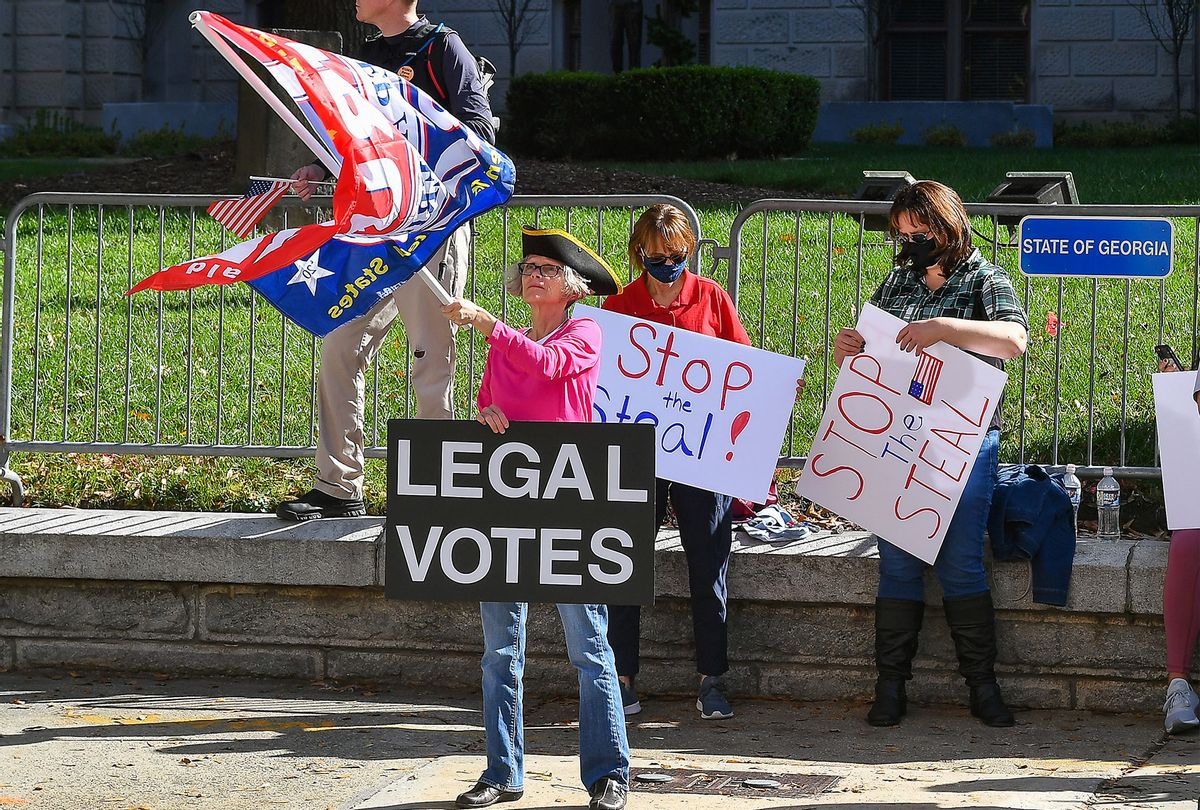 A supporter of President Trump holds a sign and waves a flag at a Stop The Steal rally in front of the Georgia State Capitol Building on November 28th, 2020 in Atlanta, GA. (Rich von Biberstein/Icon Sportswire)
--

After President-elect Joe Biden won Georgia in the 2020 presidential election, two recounts in that state confirmed Biden as the winner — and now, with an audit of more than 15,000 voter signatures, President Donald Trump's baseless claims of widespread voter fraud have once again been debunked in the Peach State.

On Tuesday, December 29, the office of Georgia Secretary of State Brad Raffensperger released a report on that audit — which, according to Atlanta Journal Constitution reporter Mark Niesse, "contradicted allegations that absentee ballots were rife with fraud." Niesse notes that "there were 10 absentee ballots that had been accepted, but voter signatures didn't match or signatures were missing" — and when Raffensperger's office contacted those voters, they confirmed that they had, in fact, submitted the ballots.

"Eight voters had mismatched signatures, but the voters told investigators the signatures were legitimate," Niesse explains. "Raffensperger, a Republican, said the audit results confirmed the election outcome again after two recounts — both by hand and machine — of all 5 million ballots cast in Georgia's presidential election."

Raffensperger's office said that "no fraudulent absentee ballots were identified during the audit."

According to Raffensperger, "The secretary of state's office has always been focused on calling balls and strikes in elections — and in this case, three strikes against the voter claims, and they're out. This audit disproves the only credible allegations the Trump campaign had against the strength of Georgia's signature match process."

Although Raffensperger and Georgia Gov. Brian Kemp are both right-wing Republicans, Trump has been furious with them for acknowledging that there is no evidence of widespread voter fraud in the Peach State and that Biden won Georgia's electoral votes fairly.

Twitter, however, flagged Trump's tweet as misleading and noted, "Election officials have certified Joe Biden as the winner of the U.S. presidential election."