When a little bit of poison is good for you: Inside the theory of dose response

How the concept of "dose response" shaped modern science and vaccinology 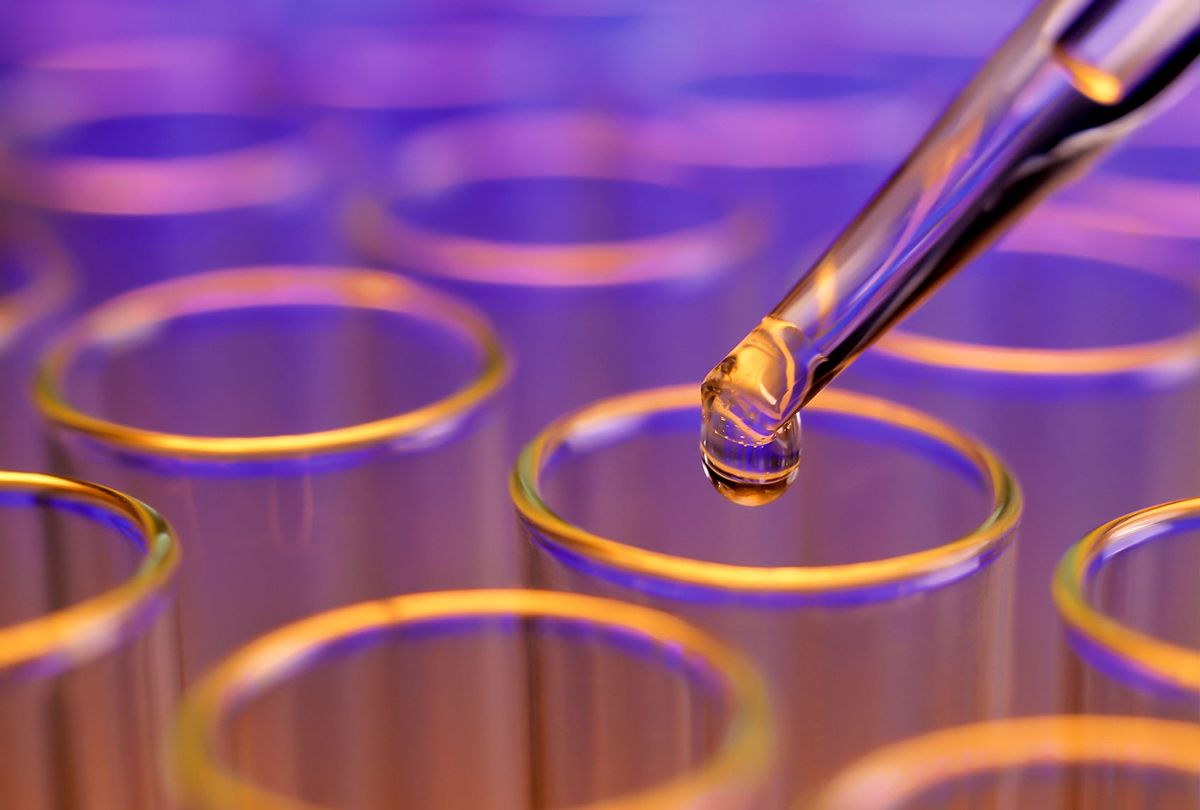 "For if one drinks much from a bottle marked 'poison,' it's almost certain to disagree with one sooner or later."
—Lewis Carroll, "Alice's Adventures in Wonderland"

In the early 16th century, a Swiss physician named Paracelsus changed the course of the healing arts with his theories on chemical treatments for disease. A literal renaissance man given the era, he was part scientist, part alchemist, and part philosopher. Three hundred years before the advent of Pasteur's germ theory, Paracelsus advised patients to keep their wounds clean to avoid infection. His study of chemicals revealed both their curative and harmful properties, and he noted that any treatment turns toxic once the dose is high enough. Paracelsus' simple yet profound insight that "the dose makes the poison" challenged the prevailing wisdom that poisons were inherently toxic. He noted that the known poisons of the day were substances that were toxic at low-doses. Yet, dilute these substances enough and they could be rendered harmless or, in some cases, even beneficial.

This theory is now known as dose response. It has become one of the key frameworks of environmental science, modern medicine, and public health. Put simply, it states that the larger the dose of a chemical or exposure, the greater the magnitude of its effect. Thus, low doses of a toxin can have zero to minimal effect, while large doses become deadly. For therapeutic chemicals, or "drugs," benefits initially rise with increasing doses before crossing a threshold toward toxicity, or overdose.

In modern medicine, dose response theory is foundational for both toxicology and pharmacology, and also carries over to the worlds of microbiology, virology, and oncology. Although in each scenario, the theory is labelled "dose response," its application differs according to the properties of the substance. In recent months, for example, dose response has been hotly debated alongside speculation on the exposure risk of COVID-19. What is the potential for virus exposure via the groceries you buy? What about the mail delivered to your home? Could you get sick from takeout food? The answer lies in the question: how much 'dose' is required to get ill?

For many chemical substances, the dose response theory of toxicity depends on five important variables that predict a subject's response to an exposure:

If you plot the administered dose of a substance versus its effect on a living organism, you often get a "dose response" curve that typically resembles the letter 'S'. 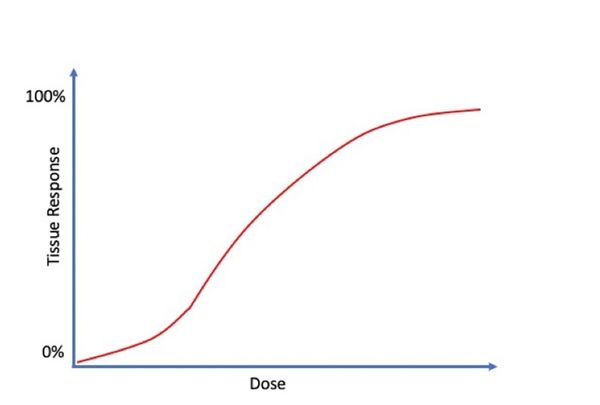 As you can see in the curve, low level exposures may have no effect on an organism up to a certain threshold. For example, many adults are familiar with the toxic effects of drinking alcohol — just ask any college student how they feel on Sunday morning. Ripe bananas also contain trace amounts of alcohol, but few individuals eat a banana and worry about their ability to drive home. While a certain dose of alcohol causes intoxication, it has no harmful effect beneath its toxic threshold. As intoxication rises past a second threshold, its effect turns deadly.

Poisons and the canary in the coal mine

The "canary in a coal mine" is a well-known idiom that has a historical antecedent. In the early 20th century, miners brought captive birds with them into the mine shafts. The humble canary would fall dead as a result of increasing toxins — particularly carbon monoxide — in the air.  Being a small creature with rapid respiration and a fast metabolism, toxins accumulate in a bird's system much faster than they would in larger animals. Thus, the miners received advanced warning of an exposure of which they would otherwise be unaware. In other words, the canary had a lower dose response threshhold than humans.

Animals that are prone to showing toxic effects and serve as harbingers of environmental degradation have come to be known as "sentinel species." Cats are susceptible to mercury poisoning, crayfish to water pollution, and bees to air pollution. Even in antiquity, people recognized that when the plague arrived, the rats were the first to die.

The dose also makes the medicine

If the dose makes the poison, it also makes the medicine. For medicines, small doses will have minimal to no effect. Larger doses begin to demonstrate their beneficial effect above a threshold — often referred to by clinicians as the "effective" or "therapeutic" dose. Increasing doses from this threshold increases the magnitude of the therapeutic effect up until it approaches toxic levels. This range is known as the therapeutic window. 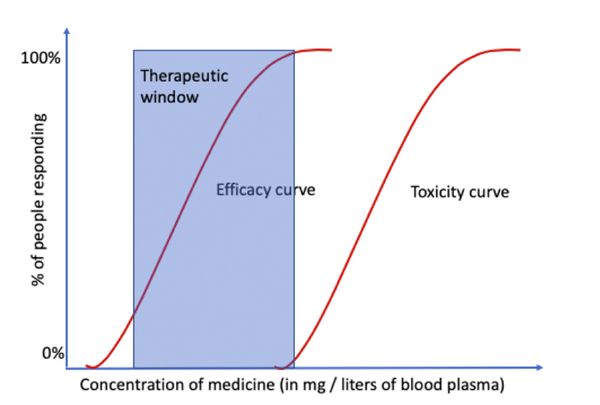 Acetaminophen, for example, is safely metabolized by liver enzymes within its therapeutic window. Metabolism is a multi-stage process that, at an intermediate stage, generates a toxic metabolite known as N-acetyl-p-benzoquinone imine (NAPQI). If a person has chronic liver disease, or if they take too much of the drug, NAPQI accumulates in their bloodstream and eventually causes permanent liver failure.

Over several centuries, medical researchers have used a process of trial and error to find therapeutic functions of substances long regarded as toxins. The bark, leaves, and seeds of the yew tree (Taxus baccata) have been known to be poisonous for centuries. The witches' brew from Shakespeare's "Macbeth" even cited "slips of yew, silvered in the moon's eclipse" as a main ingredient. Yet, the compound Paclitaxel, derived from the same plant, treats opportunistic infections in AIDS patients as well as a variety of cancers.

For cancer chemotherapy treatments in particular, one must walk a fine line, using the toxicity of a substance to preferentially destroy cancer cells without killing the patient. In this way, tumors are similar to sentinel species. The rapid rate of cellular metabolism that makes cancer cells dangerous also makes them susceptible to toxic exposures as they more quickly incorporate the dose. Cancer treatments then exploit the differential uptake of chemotherapy between healthy and tumor cells to deliver a targeted dose.

Paracelsus' doctrine may have been profound, but does that mean it is universally correct? There are at least four cases that complicate dose-response theory as succinctly stated by Paracelsus:

Carcinogens. It is generally believed that there is no "safe" dose for exposure to cancer causing agents and hence, carcinogens are inherently poisonous. Although the likelihood of cancer increases with the exposure dose, a single mutation to a single DNA base pair can be enough to result in cancer.

A cancerous cell, through its uncontrolled growth, escalates its own dose. The seemingly harmless single cancer cell divides to give rise to two such cells, then four, then eight, triggering a geometric expansion towards a cancerous tumor.

Even this line of reasoning however, is disputed by additional nuance. Communities that live at high altitudes are exposed to greater levels of cosmic radiation. Assuming a linear relationship between carcinogen dose (UV radiation) and cancer even at low doses, one would expect these communities to demonstrate higher rates of certain cancers. Yet, no such evidence exists to reveal this expected cancer cluster. This has led to the hypothesis that low-doses of radiation stimulate mechanisms in the body that serve to repair DNA damage. The body's mechanism for culling dead or dangerous cells may effectively limit these micro dose exposures before they give rise to cancerous masses.

Bioaccumulators. In 1958, after noting rising mortality in birds of prey following the widespread spraying of insecticide in New England, conservation biologist Rachel Carson identified the agricultural pesticide DDT as the highly toxic culprit. This finding was published in her influential book Silent Spring. Because raptors were at the top of the food pyramid, the fish they preyed on had in turn eaten smaller fish, which had nibbled on plants contaminated by runoff. At each level of the feeding chain, DDT levels became further concentrated in the organism.

This process, known as "bioaccumulation," arises from the fact that some toxins cannot be metabolized or excreted, and thus become increasingly concentrated up the food chain. Consequently, although there may be a safe dose for a single exposure, bioaccumulation results in the exposure becoming more pronounced over time until a harmful dose is reached. Applying this principle of bioaccumulation to people, particularly those who eat meat and are, therefore, exposed to higher accumulated doses, led to the wide-scale ban of DDT in the US and other high-income countries.

Endocrine Disruptors. Compounds that disrupt the human endocrine system are another example where the apparent simplicity of the dose response curve begins to break down. Endocrine disruptors are chemicals that are similar in structure to the hormones circulating in the human body. Hormone imbalances can have dire health consequences, particularly for the human fetus. Fetal exposure to a microdose of a certain sex hormone can lead to the malformation of sex organs, while the same dose exposure would have zero impact on an adult. Even stranger, the dose response curve for endocrine disruptors may be "non-monotonic" — that is, not show a consistent relationship between increasing dose and increasing effect. Small doses may yield significant effects, medium doses may have no effect, and high doses again may show an effect. Any number of puzzling curves have been proposed by toxicologists and researchers in order to explain these phenomena. They all call into question the dose response relationship conceived of by Paracelsus.

Viruses and bacteria. Like cancer, viruses and bacteria have the innate capability to escalate their own dose. A single viral particle that infects a host cell can make millions of copies of itself. This implies that, in theory, there is no lower limit or no truly safe dose. Yet, like cancers, we also do not typically see this play out. Some noroviruses may cause an infection in 50% of people exposed to as low a dose as 20 viral particles. Meanwhile, other viruses and bacteria may be harmless, or in some cases symbiotic, at much higher numbers. The human gut, for example, is a celebration of the therapeutic benefit of many bacteria and even some viruses that work to maintain the body's homeostasis.

What about for the novel coronavirus?

Studies of swab samples demonstrate that New York subways are populated by all manner of viruses and microbes, including everything from anthrax to the plague. And yet exposure of millions of subway riders to these pathogens do not lead to clinical cases of exotic diseases. Similarly, more and more evidence suggests handling a bag of groceries with traces of SARS-CoV-2 virus is not going to make most people sick.

Although in theory there may be no safe dose, as a practical matter, many humans are quite resilient to all kinds of exposures. Recent evidence demonstrates that wearing masks protects wearers by reducing the exposure dose of COVID-19.

Of course, some of us may be the proverbial 'canary in the coal mine' for certain exposures based on our increased susceptibility to the disease. And in the case of many chemicals on the market today, we are all canaries in the coal mine. The experiment, as it were, is ongoing.

Luke Shors is a researcher, consultant, and writer who focuses on global health and education.