As Americans are dying by the thousands, Trump aims to short-circuit democracy 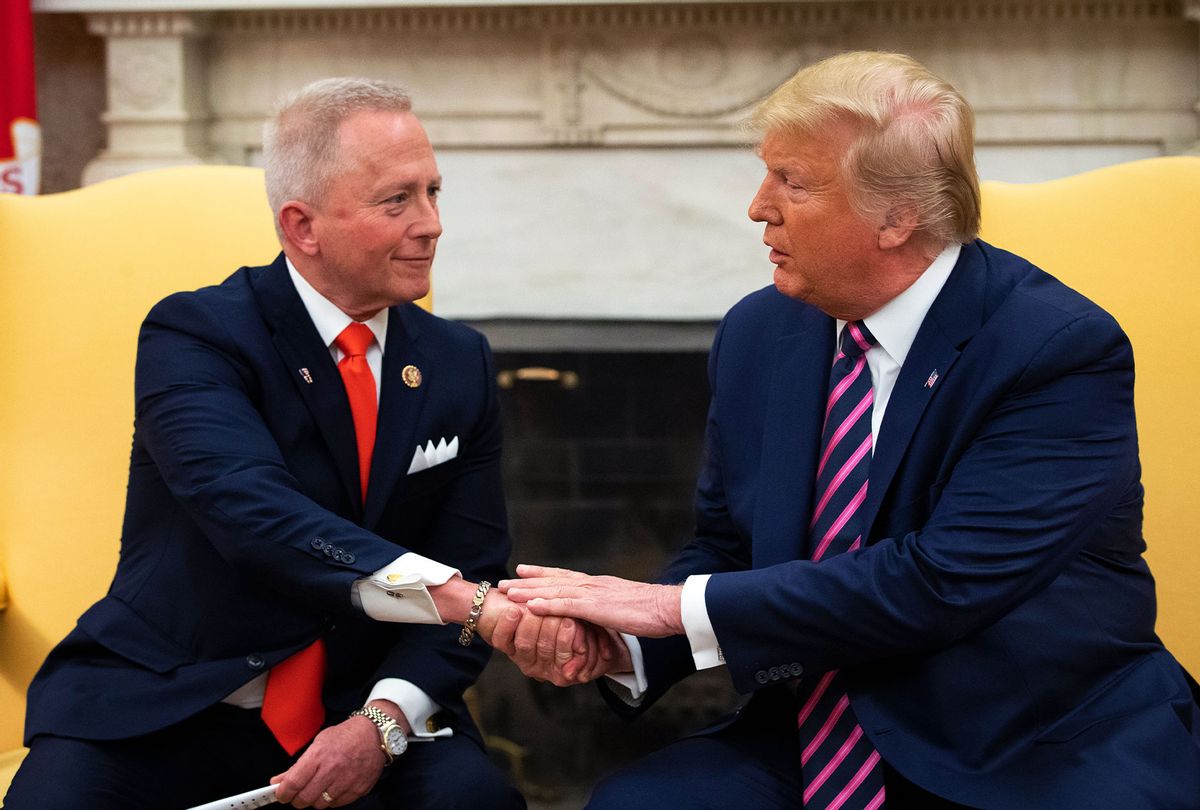 U.S. Rep. Jeff Van Drew of New Jersey, who has announced he is switching from the Democratic to Republican Party, shakes hands with U.S. President Donald Trump in the Oval Office of the White House on December 19, 2019 in Washington, DC. Van Drew voted against the two articles of impeachment yesterday in the House of Representatives. (Drew Angerer/Getty Images)
--

It's a new year, but our once-in-a-century mass death event continues. In my home state of New Jersey, the COVID death toll closes in on 20,000, while our national government remains in the kind of turmoil we might associate with a nation without a long tradition of the peaceful transition of power.

A nation with the mightiest and most high-tech military in the world has been cornered by a deadly virus — and by predatory leadership that's trying to exploit a public health crisis to perpetuate its hold on power.

As with so much during the Trump administration, what was promised in federal pandemic support to the states has failed to materialize in spectacular fashion, with the outgoing administration falling far short of its goal of vaccinating 20 million Americans by the end of 2020.

CNN reported that only 2.1 million people have gotten the vaccination, just a tenth of the goal of Trump's "Operation Warp Speed." This speed bump, which anyone who knows Donald Trump could have predicted, came as several states confirm cases of the newest COVID strain from Britain, which scientists say is no more lethal than the original — but far more contagious.

Dr. Anthony Fauci, the nation's top infectious disease physician, has said that 80 to 85 percent of the nation's population would need to be inoculated for us to achieve so-called herd immunity. That would be more than 260 million Americans.

"At the current rate, it would take the United States approximately 10 years to reach that level of inoculation," warned Washington Post columnist Leana Wen. "That's right — 10 years. Contrast that with the Trump administration's rosy projections: Earlier this month, Health and Human Services Secretary Alex Azar predicted that every American will be able to get the vaccine by the second quarter of 2021 (which would be the end of June). The speed needed to do that is 3.5 million vaccinations a day."

Here in New Jersey, with more than 200 COVID deaths per 100,000 people, we account for 5.7 percent of the deaths but are just 2.77 percent of the nation's population. "Put another way: if it were a country, the Garden State would have the highest COVID-19 per capita death toll in the world," reported NJ Advance Media on Dec. 14.

From the very beginning of the pandemic, President Trump has played red states off against blue states even as he downplayed the seriousness of the virus, consistently misleading many Americans into believing that the highly contagious and deadly virus was like the flu.

Rather than coordinate the nation's pandemic response, Trump installed political operatives in the CDC twisted its public health messaging to suit the presidential campaign calendar, undermining the critical agency's credibility when the nation's states were looking to it for science-based leadership.

Just as with Trump's reckless campaigning, this added to the body count and helped accelerate the spread of the virus, which at various times people in the White House suggested was the administration's goal, in pursuit of herd immunity.

The November election was, if anything, a referendum on this unprecedented betrayal of the public trust, whose deadly consequences will be felt by American families for generations to come. More than 81.28 million Americans voted for Joe Biden, blowing past the previous record for the most votes cast for a single presidential candidate, set in 2008 when Barack Obama garnered 69.49 million votes.

Despite the certification of the states' returns, a sizable faction of the Republican Party, including New Jersey Rep. Jeff Van Drew, who was elected as a Democrat in 2018 before switching parties during Trump's impeachment, want to end-run the will of the American people as and have the votes thrown out from swing states that went for Biden.

On Wednesday, well over 100 Republican members of the House of Representatives, along with about a dozen members of the U.S. Senate, are planning to protest the formal certification of Biden as president, even though all the lawsuits alleging voting fraud filed by Trump and his allies have been rejected by every court, including the nation's highest.

Moreover, despite the Trump campaign's post-election challenges in the contested states, Biden's victory in those states survived the labor-intensive process of hand recounts, which also produced no evidence of voter fraud.

On Dec. 12, the U.S. Supreme Court refused to hear a lawsuit brought by Texas Attorney General Ken Paxton to throw out the certified vote tallies from Georgia, Michigan, Pennsylvania and Wisconsin, based on the claim that the mail-in ballot processes adopted by those states amid the COVID pandemic violated the law and were subject to widespread fraud.

One hundred twenty-six Republican House members, including Van Drew, aligned themselves with that Texas challenge, which was unanimously rebuffed by the Supreme Court. Yet, this faction, with an eye on their own ambitions, have chosen to embrace Trump over abiding by their sworn duty to "support and defend the Constitution … against all enemies, both foreign and domestic."

In President-elect Biden's Dec. 14 speech, given after the certification of the election returns, he described the Texas lawsuit as an effort to wipe out the votes of more than 20 million Americans, a "position so extreme, we've never seen it before, a position that refused to respect the will of the people, refused to respect the rule of law and refused to honor our Constitution."

Biden went on to proclaim that the November results meant that "faith in our institutions prevailed" and that "the integrity of our elections" remained intact while suggesting now was the "time to turn the page as we've done throughout our history, to unite, to heal."

But as Trump and his junta have repeatedly demonstrated throughout the pandemic, they have no interest in uniting and healing, even in the midst of a once-in-a-century mass death event — if fostering division will help tighten their grip on power.

Their self-serving antics, pulled on a weary nation aching for a shred of normalcy in a sea of misery and uncertainty, need to be framed for posterity as the opening line of their obituaries.