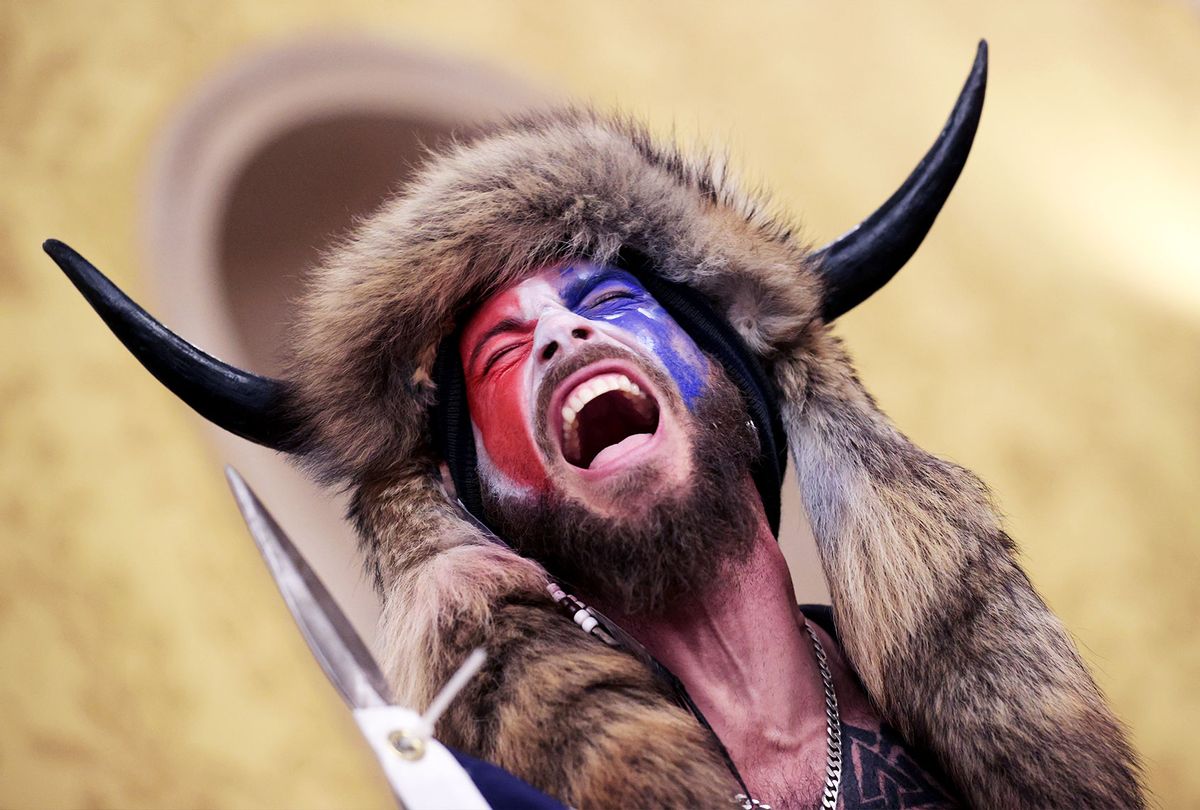 A protester is seen inside the US Capitol Building on January 06, 2021 in Washington, DC. Congress held a joint session today to ratify President-elect Joe Biden's 306-232 Electoral College win over President Donald Trump. A group of Republican senators said they would reject the Electoral College votes of several states unless Congress appointed a commission to audit the election results. Pro-Trump protesters entered the U.S. Capitol building during demonstrations in the nation's capital. (Win McNamee/Getty Images)
--

Some of President Trump's supporters have tried to blame Wednesday's mob assault on the U.S. Capitol on left-wing "antifa" protesters — even though numerous prominent Trump fans posed for photos during the riot and bragged about their involvement after publicly planning the assault for weeks.

Many of these claims are based on a Washington Times report that cited facial recognition company XRVision, claiming it had "matched" two purported antifa members to "men inside the Senate." The company issued a statement calling the report a lie and clarifying that it had actually matched the photos to two members of a neo-Nazi organization and a QAnon supporter. The statement confirmed what was already obvious from countless photos, videos and live-streams posted by the rioters themselves while waving Trump flags and wearing MAGA gear.

By the time the statement was issued, the false antifa claim had already made its way across social media to Fox News and even the floor of the House of Representatives.

Admitting that he did not know "if the reports are true," Rep. Matt Gaetz, R-Fla., declared that "some of the people who breached the Capitol today were not Trump supporters. They were masquerading as Trump supporters and in fact, were members of the violent terrorist group antifa."

Other lawmakers pushed the claim as well. Rep. Paul Gosar, R-Ariz., who led the challenge to his state's electoral votes during the joint session of Congress that was targeted by the attackers, claimed on Twitter without evidence that "this has all the hallmarks of Antifa provocation." Rep. Mo Brooks, R-Ala., told Fox Business host Lou Dobbs that "there is some indication that fascist antifa elements were involved, that they embedded themselves in the Trump protests."

Some Fox News hosts have themselves insisted that Trump supporters could not possibly be behind the riot — which immediately followed Trump's speech urging supporters to go to the Capitol while falsely claiming the election had been rigged against him. Donald Trump Jr. told supporters at the preceding rally to "stand up and fight." Trump attorney Rudy Giuliani proposed settling the election by "trial by combat."

"I'd like to know who the agitators were," Fox News host Sean Hannity said Wednesday, claiming that "those who truly support President Trump … do not support those that commit acts of violence."

"They were likely not all Trump supporters," host Laura Ingraham said in the following hour, alluding to the debunked report. "I have never seen Trump rally attendees wearing helmets, black helmets, brown helmets, black backpacks — the uniforms you saw in some of these crowd shots."

"We may never know the truth here," fellow Fox host Tucker Carlson claimed earlier in the evening. "I keep seeing all kinds of accounts of who they were and what their motives might have been."

Former Republican vice-presidential nominee Sarah Palin told Fox News host Martha MacCallum that "a lot of it is the antifa folks," citing "pictures" that someone sent her.

Though some Trump supporters based their frivolous claims on photos that spread across social media, the Washington Times story appears to be at the center of many of these allegations. The conservative newspaper claimed that XRVision "used its software to do facial recognition of protesters and matched two Philadelphia Antifa members to two men inside the Senate." The report claimed that one of the men "has a tattoo that indicates he is a Stalinist sympathizer" and the other "is someone who shows up at climate and Black Lives Matter protests in the West."

The company strongly denied the report and demanded a retraction and apology.

"XRVision views the Washington Times publication as outright false, misleading, and defamatory," the company said in a statement. "Our attorney has contacted the Washington Times and has instructed them to 'Cease and Desist' from any claims regarding the sourcing of XRVision analytics, retract their current claims, and publish an apology."

"We concluded that two of the individuals (Jason Tankersley and Matthew Heimbach) were affiliated with the Maryland Skinheads and the National Socialist Movements," the statement said. "These two are known Nazi organizations; they are not Antifa. The third individual identified (Jake Angeli) is an actor with some QAnon promotion history. Again, no Antifa identification was made for him either."

Fact-checkers at The New York Times, Politifact and Snopes all confirmed that there was "no evidence of anyone but a mob of Trump supporters" involved in the melee. Many of them had openly plotted for weeks on social media, posed for photos during the siege and posted messages on conservative social media sites Gab and Parler as they tried to "hunt down" Vice President Mike Pence at the Capitol.

Angeli, better known in MAGA world as "Q Shaman," is a prominent figure in QAnon circles. He was seen in countless photos and videos wearing a horned and furry bison costume that he has worn to many other pro-Trump events. At one point, he was seen standing on the dais in the Senate chamber.

Heimbach is a prominent white nationalist who helped promote the deadly Charlottesville protest in 2017 and was jailed for shoving a protester at a Trump rally.

Another person identified in the riot is Derrick Evans, who live-streamed himself inside the Capitol. Evans is a newly-elected member of the West Virginia state legislature.

The man seen in viral photos ransacking House Speaker Nancy Pelosi's office and stealing her mail identified himself as Richard "Bigo" Barnett, and bragged to reporters about the incident.

The FBI issued a statement on Wednesday asking the public for help identifying other rioters.

People can submit photos or images to fbi.gov/USCapitol and report any relevant information to 1-800-CALL-FBI or tips.fbi.gov.