The Pentagon blamed the Capitol Police, who turned down repeated offers of assistance before the deadly riot 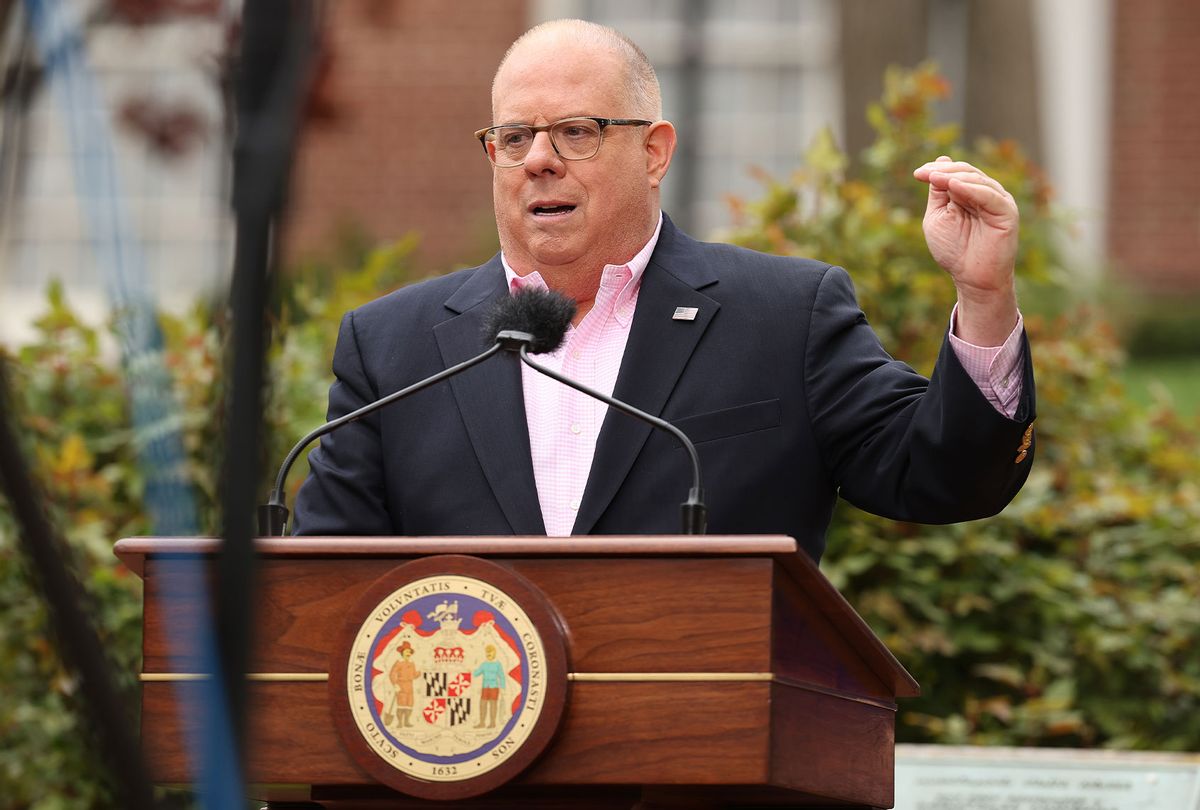 Hogan told reporters on Thursday that House Speaker Nancy Pelosi, D-Calif., House Majority Leader Steny Hoyer, D-Md., and Senate Majority Leader Chuck Schumer, D-N.Y., called him from an "undisclosed bunker" and were "pleading" for assistance as Congress was overrun by Trump supporters after the president urged them to go to the Capitol during a speech falsely claiming the election was stolen.

"[Hoyer] said that the U.S. Capitol Police was overwhelmed, that there was no federal law enforcement presence and that the leaders of Congress were pleading with me, as the Governor of Maryland, for assistance from Maryland's National Guard and State Police," he said.

Hogan said he mobilized 200 "specially trained" state troopers and "immediately" offered support but the Defense Department "repeatedly denied" approval for him to send in the state's National Guard. The Republican governor said that after an hour and a half he received a call "out of the blue, not from the secretary of defense, not through what would be normal channels," but from Army Secretary Ryan McCarthy, who said the guardsmen could "come as soon as possible."

"I was ready, willing and able to immediately deploy [National Guard] to the Capitol, however we were repeatedly denied approval to do so," he said.

Virginia Gov. Ralph Northam, a Democrat, called up the National Guard after he received calls from Pelosi and D.C. Mayor Muriel Bowser asking for help. A spokeswoman for Northam told The Washington Post that the governor called up the National Guard immediately and worked with the Defense Department "only after the fact," though the administration was "able to reach the necessary agreements before guardsmen crossed state lines."

While governors control the National Guard, they have to receive approval from the Pentagon to deploy. Since D.C. is not a state, only the Pentagon has the authority to deploy the D.C. Guard. Bowser complained that the Defense Department took far too long to deploy guardsmen after the Capitol came under attack and CNN and The New York Times reported that Trump resisted deploying troops, prompting acting Defense Secretary Christopher Miller to reach out to Vice President Mike Pence instead.

Some National Guard troops were stationed around the city but not at the Capitol. The Pentagon disputed reports that it denied or delayed requests, claiming that Miller immediately called up 1,100 members of the D.C. Guard after receiving a call from Bowser at 2 pm. though the White House did not announce that additional troops were activated until after 3:30 pm and a Pentagon spokesman did not make the same announcement until 3:52 pm. Those troops had to travel to an armory to gear up and load vehicles and arrived shortly before 6 pm, according to the Defense Department.

Defense officials also disputed that Trump did not sign off on the mobilization. Pentagon spokesman Jonathan Hoffman told reporters that Trump signed off on National Guard support days earlier and any contact between Pence and Miller was more a courtesy to keep the White House apprised of the situation.

Pentagon officials blamed the Capitol Police, which rejected its offers of support. The Associated Press and other outlets also reported that Capitol Police officials turned down an offer to send National Guard troops ahead of Wednesday's violence and later rebuffed an offer from the Justice Department to send FBI agents after the Capitol was overrun.

McCarthy told reporters that 340 National Guardsmen were assigned mostly to traffic control but "no other requests were made" until Bowser called the Pentagon. Hoffman told reporters that the Capitol Police and the Justice Department "believed they had sufficient personnel and did not make a request" for additional assistance before the riot.

But The Washington Post reported that the Pentagon placed "tight limits" on the DC Guard, issuing memos on Monday and Tuesday in response to an earlier request from Bowser prohibiting guardsmen from receiving any ammunition or riot gear and interacting with any protesters unless it was in self-defense. "The limits were established because the Guard hadn't been asked to assist with crowd or riot control," the outlet reported.

Bowser told the Post that Capitol Police "made it perfectly clear that they needed extraordinary help, including the National Guard. There was some concern from the Army of what it would look like to have armed military personnel on the grounds of the Capitol."

It took roughly three hours for the National Guard to mobilize to the Capitol, at which point rioters had already forced lawmakers to evacuate in gas masks and ransacked the Senate chamber and lawmakers' offices. The Pentagon left it to law enforcement agencies to clear the building "amid the hesitancy about sending Guard units into the building itself," according to the Post.

McCarthy told reporters officials did not in their "wildest imagination" believe rioters would breach the Capitol.

Many DC and federal officials questioned why the National Guard was not more prepared to assist quickly, noting their overwhelming preemptive deployment ahead of Black Lives Matter protests in the nation's capital. A former Trump Cabinet member told The Military Times that there needs to be an investigation into why guardsmen were not ready earlier.

"Why wasn't the D.C. National Guard, and perhaps Guard troops from Maryland and Virginia, there ahead of time?" the former Cabinet member said. "It makes absolutely no sense that they were not there ahead of time. This was not an intelligence failure. The president invited these folks to Washington. He met with them and incited them. Everyone knew they were coming for a significant period of time."

McCarthy told reporters that intelligence ahead of the riot was "all over the board."

"There were estimates of 80,000 there were estimates around 20 to 25 [thousand]. So getting back to just the pure intelligence. It was all over the board," he told reporters. "It was very hard to make that determination of what you're dealing with."

D.C. Police Chief Robert Contee claimed on Thursday that there was "no intelligence that suggested there would be a breach of the U.S. Capitol" even though many of the rioters plotted the assault publicly on social media. Capitol Police and the Justice Department also believed they had enough resources and appropriate intelligence to handle the crowd, Sen. Mark Warner, D-Va., the top Democrat on the Senate Intelligence Committee, told the Wall Street Journal.

"They were flat wrong," he said. "Yesterday was an embarrassment to their response."

The chief of the Capitol Police and the House and Senate sergeant-at-arms announced they would resign after the widely criticized riot response.

One law enforcement official sent to the Capitol during the riot told the Journal he was surprised there was no tight police perimeter around the Capitol.

"The whole thing felt woefully underprepared. It was like 'get there and figure it out,'" the official said. "There wasn't command and control. This is not how these things are supposed to go down."

Some lawmakers and Capitol Hill staffers have argued that the law enforcement response would have been very different if the crowd in question was not white Trump supporters.

"The fact is that it's explicitly because they were white dudes with the support of the president that law enforcement basically did nothing," one staffer told Politico.

Some Capitol Police officers were seen allowing rioters through security gates and posing for selfies with the mob. One rioter told CNN that the "cops were very cool."

"It's really crazy, you could tell that some of them were on our side," he said.

Another rioter told The New York Times that a Capitol Police officer tried to help them find Schumer's office as they hunted for the top Democrat in the halls of the Capitol. Meanwhile, a DC police officer said in a public Facebook post that off-duty police officers who were among the rioters "flashed their badges" as they tried to overrun the building, according to the outlet.

"If these people can storm the Capitol building with no regard to punishment," the officer wrote, "you have to wonder how much they abuse their powers when they put on their uniforms."