What the heck is Vegemite (and how do you eat it)?

Salty, umami-rich, with a hint of bitterness, Vegemite is an Australian obsession. But it wasn't always this way 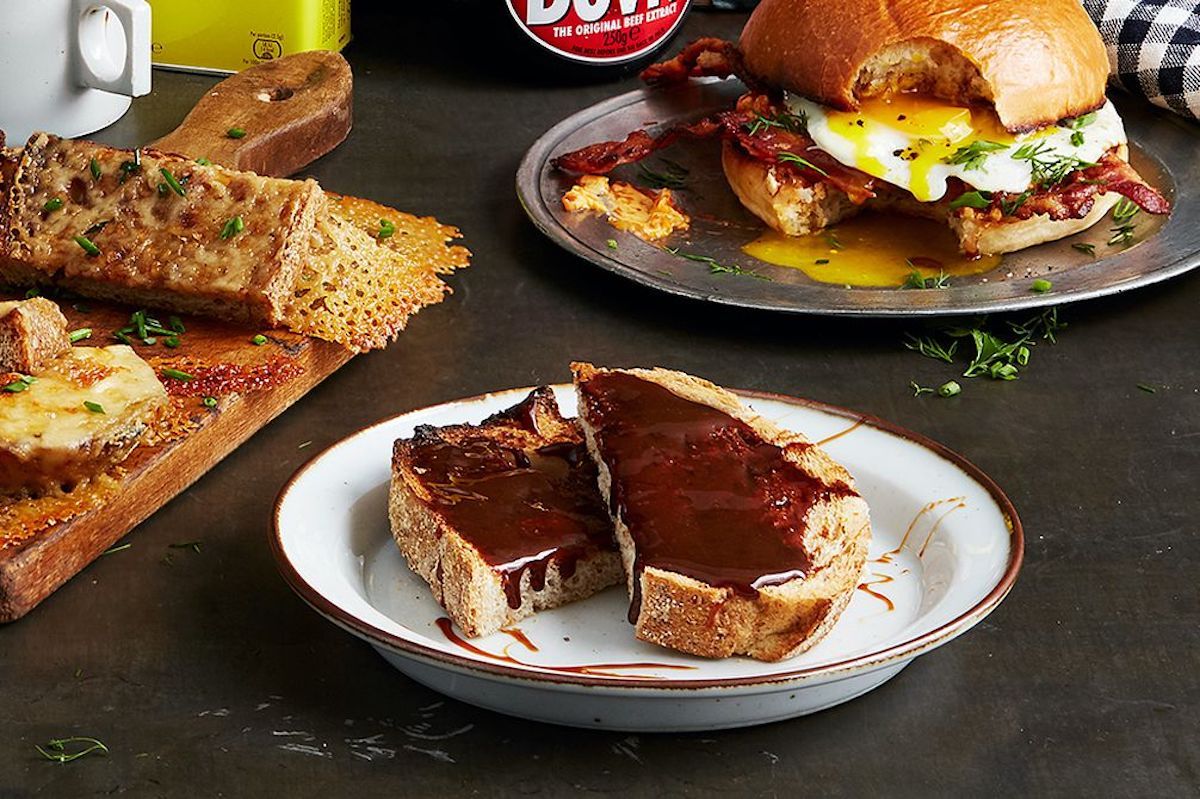 Cut off from the rest of the populated landmass of planet Earth for several millennia, Australia had plenty of time to develop some natural quirks. Take marsupials (pouches, hopping), for example, or the duck-billed platypus (duck-bill, poison spur), or the disturbing preponderance of poisonous snakes, for example. But it was with the invention of Vegemite in 1922 that things really went off the rails. What is Vegemite? So glad you asked.

Vegemite is a thick, dark spread extracted from the yeasty waste of the beer-brewing process, seasoned with celery, onion, salt, and some undisclosed extra flavors. Salty, umami-rich, with a hint of bitterness, Vegemite is an Australian obsession. But it wasn't always this way.

The History Of Vegemite

Our story begins with a crisis. German U-boat attacks and the turmoil of WWI disrupted the steady import of Marmite, an incredibly popular British yeast spread, into Australia. Desperate for a replacement, Australian food company Fred Walker & Co. turned to its chief scientist, Dr. Cyril Callister, for help. Over the course of several months, Callister transformed a primordial brewer's yeast sludge into a savory spread, thicker than Marmite and with a comparable, but uniquely alluring (to some) flavor. But Vegemite was not met with the adulation Dr. Callister had hoped. When Marmite imports stabilized, many Aussies returned to the more familiar product.

In 1928, in an attempt at revitalizing the brand, Fred Walker & Co. changed the name of the spread to Parwill, a clever (they thought) set-up for ads that declared, in a heavily Australian accent, "if Marmite, then Parwill!" But alas, Par-would-not. With the Vegemite name restored, Walker decided to lean on the success of his new venture, the Kraft Walker Cheese Co. (yes, that Kraft). Jars of Vegemite were given free with the purchase of Kraft products, finally — even if only because it was of no cost and plentiful — establishing the brand in Australian homes and hearts.

The greatest threat to your future love of Vegemite is reckless over-enthusiasm. Though it may look spoonable, like a dark chocolate Nutella, Vegemite is most commonly scraped over well-buttered toast, just a dab per slice. Where a thick slather would overpower your taste buds, a proper scrape gives the right balance of rounded umami that melds with the rich butter. That said, once you're comfortable with the stuff, the sky is the limit. Fans have been known to mix Vegemite with water to form a hearty broth, or even to season steak tartare.

We've already suffered through a catastrophic bucatini shortage, not to mention flour and yeastdeficits; should Vegemite, too, go missing from the shelves, there are plenty of alternatives.

Thinner in consistency and slightly sweeter in taste, Marmite is nevertheless the closest substitute for Vegemite. Spread it on toast as you would Vegemite or rub it on chicken.

Swiss Cenovis, New Zealand Marmite (different from the English product), Australian Promite, and OzEmite are some of the many other yeast extract spreads produced around the world with a roughly similar consistency and flavor profile.

Another rich, salty, spreadable product bursting with umami, miso is unmistakably not Vegemite. But it still makes for a savory substitute spread on toast with a bit of butter. Go for a darker, more aged miso to get the most powerful salt and umami kick.

Though it's unlikely you'll ever find yourself standing in the kitchen eating Vegemite by the spoonful (that's what peanut butter was made for), if you really fall for it, you may find yourself scrambling for the last jar on the grocery shelf, toilet paper be damned.