Republicans, don't be afraid to impeach: Trump's base will get over it — and get in line 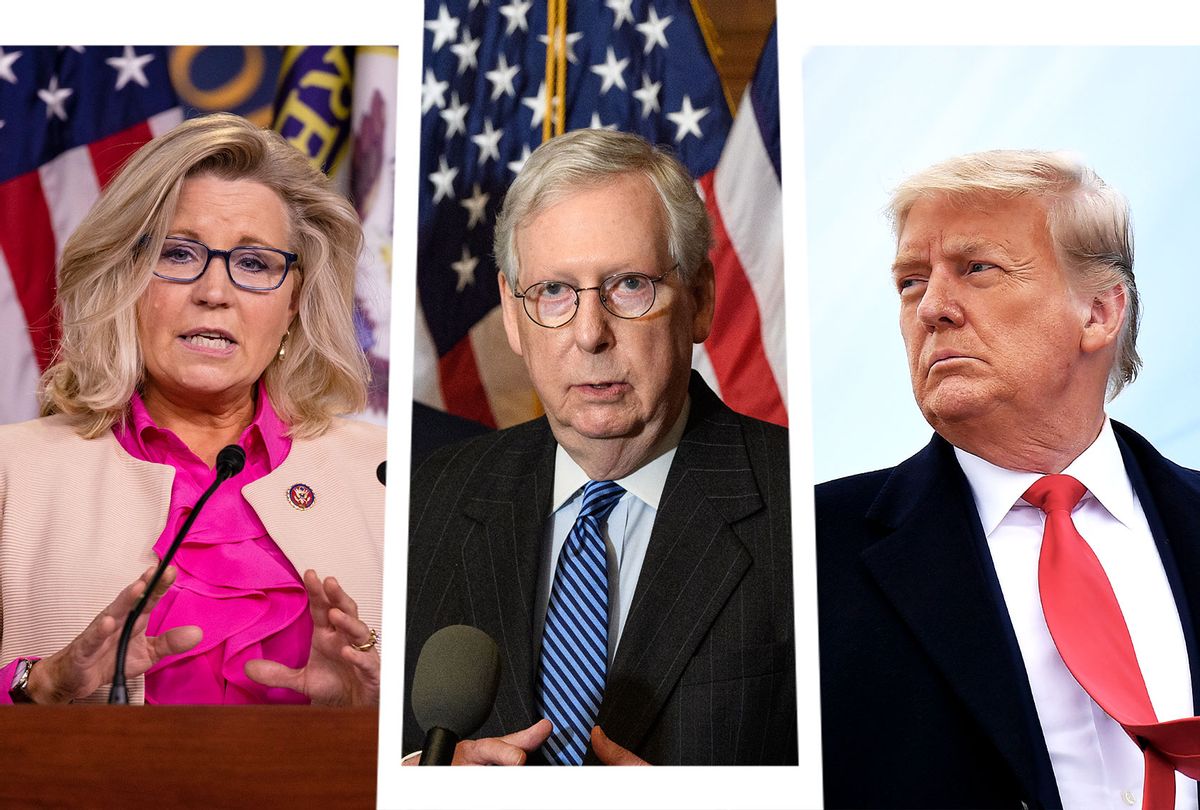 In a twist that is a legitimate shock, it appears that some Republicans — after years of sycophancy, no matter what Donald Trump does — are finally coming around to the idea that impeaching and removing the mofo already might be the smart move after he incited an insurrection at the Capitol.

So far, five Republican House members — including Rep. Liz Cheney of Wyoming, the third-ranking Republican in the House — have committed to voting to impeach Trump. In an even more startling development, the New York Times reports that Senate Majority Leader Mitch McConnell "has concluded that President Trump committed impeachable offenses and believes that Democrats' move to impeach him will make it easier to purge Mr. Trump from the party."

There are now some troubling signs that large chunks of the Republican congressional caucus supported the insurrection and even claims that some may have conspired with the mob leaders. For Republicans not keen on being chased down by a murderous mob because they refuse to illegally overthrow Joe Biden's presidential win, the idea of impeaching and removing Trump so that he can never run for office again is starting to sound appealing.

Still, what is likely holding many GOP members back is the fear of alienating Trump's much-ballyhooed base, who is not only loyally standing by their man (75% of GOP voters approve of Trump post-insurrection), but appears to be supportive of the coup itself (68% refuse to say an overt attempt to overthrow an election is dangerous for democracy). And while the fear factor is overstated as a reason for Republican loyalty to Trump over the years —  most of the time, they backed Trump because they wanted to — there is a history of Trump threatening revenge on Republicans by promising primary challenges.

But Republicans should not be afraid of Trump's base.

On the contrary, while there may be some political blowback in the short term, the best possible thing the Republican Party can do right now to save itself in the long run is to throw Trump overboard.  His loyalists will whine and fuss, but Republican voters will come around. They always do. Because power matters to Republican voters more than anything. They aren't going to just give up on the Republican party, which still remains the only viable pathway for conservative voters to retain power in our two-party system.

The arguments for why Trump is a threat to the Republican party are well-worn, and now indisputable. Despite the confidence of arrogant Republicans who believed they could control Trump through regular golf outings, the truth is that his self-dealing and lack of loyalty to his allies always made him a threat to the party. Indeed, one of his last acts before this insurrection was to pull a stunt undermining the Republican position on the coronavirus stimulus for no apparent reason other than an idiotic belief that he could blackmail McConnell into finding some way to steal the election for him.

Now he's a literal physical threat to Republicans, having sent a mob to chase down anyone viewed as "disloyal" — including Vice President Mike Pence — for failing to break the law in order to steal the election for Trump.

One reason Republicans have stuck by Trump is because he is a voter turnout machine. Trump appears to motivate voters who often don't vote. The man controls a dirtbag bat signal that moves conspiracy theorists and other assorted weirdoes and losers that are otherwise alienated from electoral politics. He got an eye-popping 74 million votes in 2020, the second biggest voter haul in American history.  The biggest voter haul in American history, however, was Biden's, who had over 81 million votes. And that exposes the main problem Trump presents to Republicans. Yes, he turns out Republican voters — but he turns out even more Democratic ones, as people who typically tune out of politics are motivated by the sheer repulsion Trump inspires.

The reality is that Republicans were actually doing just fine prior to Trump. They were able to enjoy structural advantages that allowed them to hold the majority of political power, despite the fact that most Americans prefer Democrats. The overrepresentation of conservative voters in rural and suburban areas, along with voter suppression and gerrymandering, meant Republicans didn't really need all those extra voters that Trump dredged up, especially not at the expense of mobilizing the left.

In addition, Republicans can count on a pre-Trump voting base that is more reliable than Democratic voters. Republican voters tend to be older, less likely to have moved recently, and wealthier — all factors that make them more likely to vote in every election. Those people may like Trump, but most aren't going to stop voting without him, because they like power more.

Republicans would be wise to worry less about their base, and more about the way Trump turns out the opposition. The Georgia election is proof of this. Prior to 2020, Georgia was a solidly red state, so much so that it was nearly impossible to imagine it going blue. But then not only did Biden win the state in November but two Democrats also beat Republican incumbents in a January runoff the night before the Capitol riot.

This was not because, as many people wishfully hoped, Trump's conspiracy theories about a "rigged" election drove down Republican turnout. On the contrary, Republicans turned out in droves, proving once again Republican voters are far more motivated by the prospect of beating Democrats than they are by Trump's personality. It's just that Democrats turned out even more.

Part of that remarkable feat was absolutely due to the hard work by Stacey Abrams and other voting rights activists who have done the often thankless labor of registering and turning out underrepresented voters in Georgia. Part of that is the demographic change that has made Georgia more diverse and urban. But the turnout, on both sides, was well beyond what even the most robust get-out-the-vote campaign could typically hope for in a runoff election. That's because of Trump and how he activates both Republicans and Democrats to vote.

All in all, the pre-Trump political landscape was really good for Republicans and bad for Democrats.

If any other Republican had been in the White House in 2020, it's quite likely that they would have been re-elected and Republicans would have won the Senate or both houses of Congress. Instead, Democrats won both chambers of Congress and the presidency by riding a wave of anti-Trump sentiment. Dumping Trump so that he can't run again will lower the temperature of politics, allowing Republicans to return to their incredibly successful — if deeply evil — strategy of quietly undermining democracy and entrenching minority power.

McConnell seems to have figured this out, which is why he let it leak out that he is experiencing warm feelings about impeachment. Sure, Republican voters might be mad, for a minute. But what are they going to do, not vote and let Democrats win? Ha! No way! From a strictly self-interested perspective, Republicans would be wise to dump Trump and trust that their voters will come around. Their voters always do, in the end.