How long will the ghost of Trumpism haunt the GOP?

Trumpism now has a life of its own 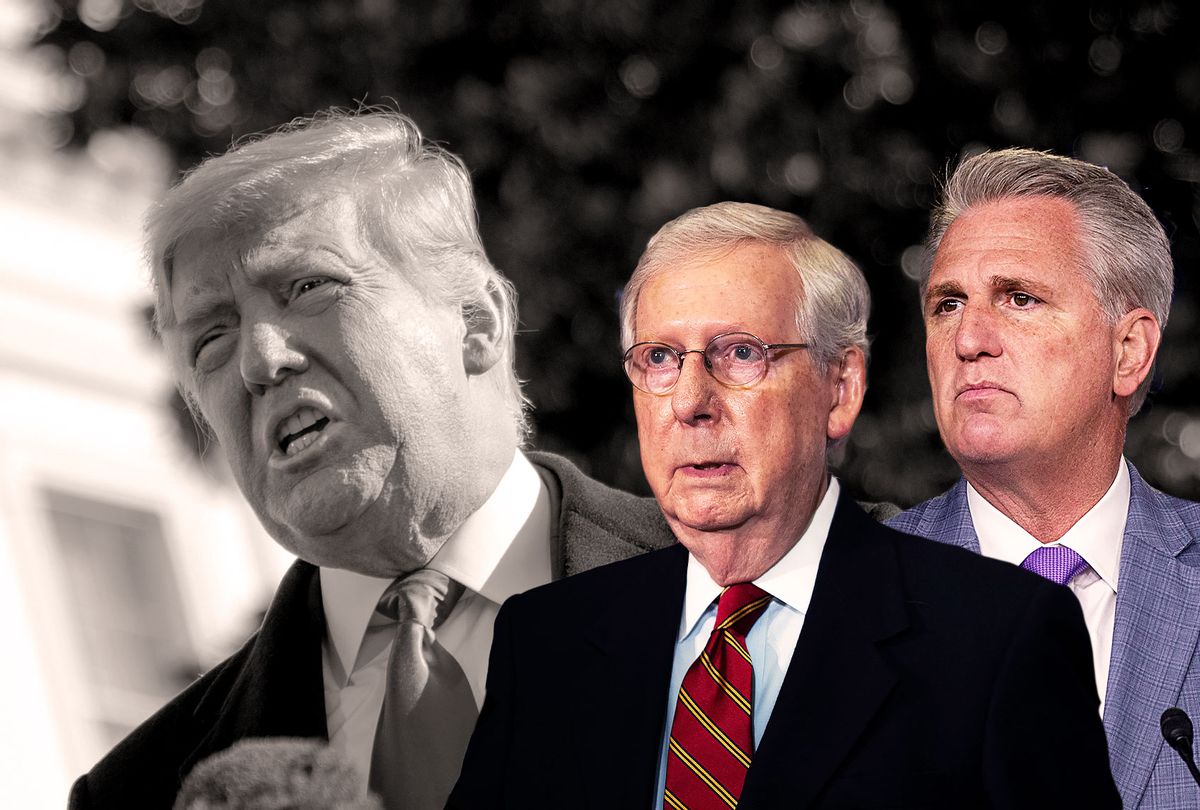 During the House of Representatives' impeachment debate on Wednesday, Rep. Gerry Connolly, D-Va., turned to the Republican side of the aisle and asked, "Is there any depravity too low? Is there any outrage too far? Is there any blood and violence too much to turn hearts and minds in this body?"

For 197 House Republicans, the answer, apparently, is no — at least when it comes to President Donald Trump and his rabid supporters. After all, just one week before Trump sent an angry, deluded mob, which he had summoned to gather on that day, to storm the U.S. Capitol and stop a joint session of Congress from certifying the Electoral College votes for Joe Biden. The violence that ensued targeted the elected representatives who were in the building, including Republican Vice President Mike Pence.

"This is a moment of truth, my friends," Connolley asked his Republican colleagues this week. "Are you on the side of chaos and the mob? Or on the side of constitutional democracy and our freedom?"

Only ten GOP House members defended their colleagues, their institution, the democratic process and the Constitution by voting to impeach Donald Trump for a second time. Only ten. So yes, Congressman Connolly was right to ask the question. As we've seen over the past five years of the Trump nightmare, one that has featured everything from sexual assault to national security betrayal to massive corruption and now incitement of a violent insurrection, there is no outrage too far nor depravity too low.

Sure, these Republican officials sometimes grumble anonymously to the press and many of them privately assure their congressional comrades that they disapprove, but the base loves Trump so there's nothing much they can do about it if they want to keep their jobs — which many are apparently willing to sell their souls to do.

Polling done after the assault on Congress shows that Trump has lost a little support from Republicans but not much. According to a Politico–Morning Consult poll, 75 percent of Republican voters said they still approve of the job Trump is doing, which is 8 points less than it was a month ago. A Reuters–Ipsos showed a steeper decline of 18 points since August, bringing Trump down to 70 percent approval among Republicans. That's right. He's lost some support but you'll notice that in both polls the vast majority of Republican voters still approve of Donald Trump.

And it appears that they don't find the violence that was perpetrated on police officers or the vandalism and threats to Vice President Pence's life to be deal-breakers. As this New York Times article illustrates, many local and state Republican officials across the country either believes the violence was perpetrated by people other than Trump supporters or was something they didn't have a problem with in the first place. The report quotes one Oklahoma County GOP chairman wondering on Facebook just hours before the riotous mob took over the Capitol why violence is unacceptable. He wrote, "What the crap do you think the American revolution was? A game of friggin pattycake?"

According to The Times, "the opposition to [Trump] emerging among some Republicans has only bolstered their support of him." That's the support that turned into ugly mob violence on Jan. 6th.

When Trump boasted that he could shoot someone on 5th Avenue and not lose any voters, he may have been right. And this does present something of a dilemma for the Republican establishment which looks at his national record and sees someone who lost the popular vote twice, the electoral college once and put both the House and Senate back in Democratic hands over the course of his single term. And yet his blatant white nationalism, lies and conspiracy-mongering has proven to be catnip to the hardcore base of the party, rendering any attempt to purge him very difficult.

Nonetheless, they are testing the waters. While it's true that Trump maintains a large majority of support among GOP voters, it's not as large as it used to be and Senate Majority Leader Mitch McConnell, R-Ky., was not pleased by the losses in Georgia which he reportedly lays at Trump's feet. For his part, McConnell got what he wanted from Trump and no longer has any reason to put up with him. And neither does Corporate America which, unlike Trump's cult followers, is not immersed in conspiracy theories and doesn't want to see the country descend into violence and chaos. That's bad for business. (Of course, it's just a total coincidence that they are taking this "principled stand" against Trump at the moment when Democrats are a week away from taking total control of the government.)

On the House side, you have a national security hawk and a member of the House Leadership, Liz Cheney, R-Wy, coming out strong against Trump to see if there are any remnants of the old flag waving Republican Party that can be reached with calls to traditional America patriotism. So far, it isn't looking good. The Trump followers may chant "USA!, USA!" and babble about "Communist China" but their real enemies are already within the U.S. borders and it appears that Liz Cheney may be one of them.

I don't think anyone knows yet whether Trump will survive this or if Trumpism survives without Trump. He's dominated our political culture for five years, with his desperate need for attention and our compulsion to give it to him. Obviously, tens of millions came to worship him as a cult leader — the QAnon believers among them, and they are legion, even think he is "a messianic warrior battling 'deep state' Satanists." But he deeply invaded the consciousness of the rest of the country as well, even those who hate him with the same passion as those who adore him. From the moment he came down that golden escalator in 2015, we haven't been able to take our eyes off of him, even when we desperately wanted to.

But after Jan. 20 he will not be able to command that level of attention, even if he decides to announce his run for 2024 that same day. There is no novelty in anything he might do, he will no longer wield real power and without access to his social media following, he simply will not be particularly accessible, at least on the level he has been for the past five years. He still has his supporters, of course, but without the grandeur of the office and the ability to dominate the political stage, you have to wonder if he will be able to maintain their attention much longer.

I have no doubt that "Trumpism," if it's defined as the right-wing extremism that let fly at the U.S. Capitol last week, will continue to be a threat. It existed before Trump came along. He just grew it and brought it mainstream. But I'm afraid it now has a life of its own and I'm not sure that Corporate America, Mitch McConnell, or even Donald Trump can snap some fingers and make it go away. The problem really isn't Trump. It's all those people who said over and over again, "he says what I'm thinking."