What if cute grumpy-faced cats are really a Cronenberg-esque eldritch horror of human genetic manipulation? 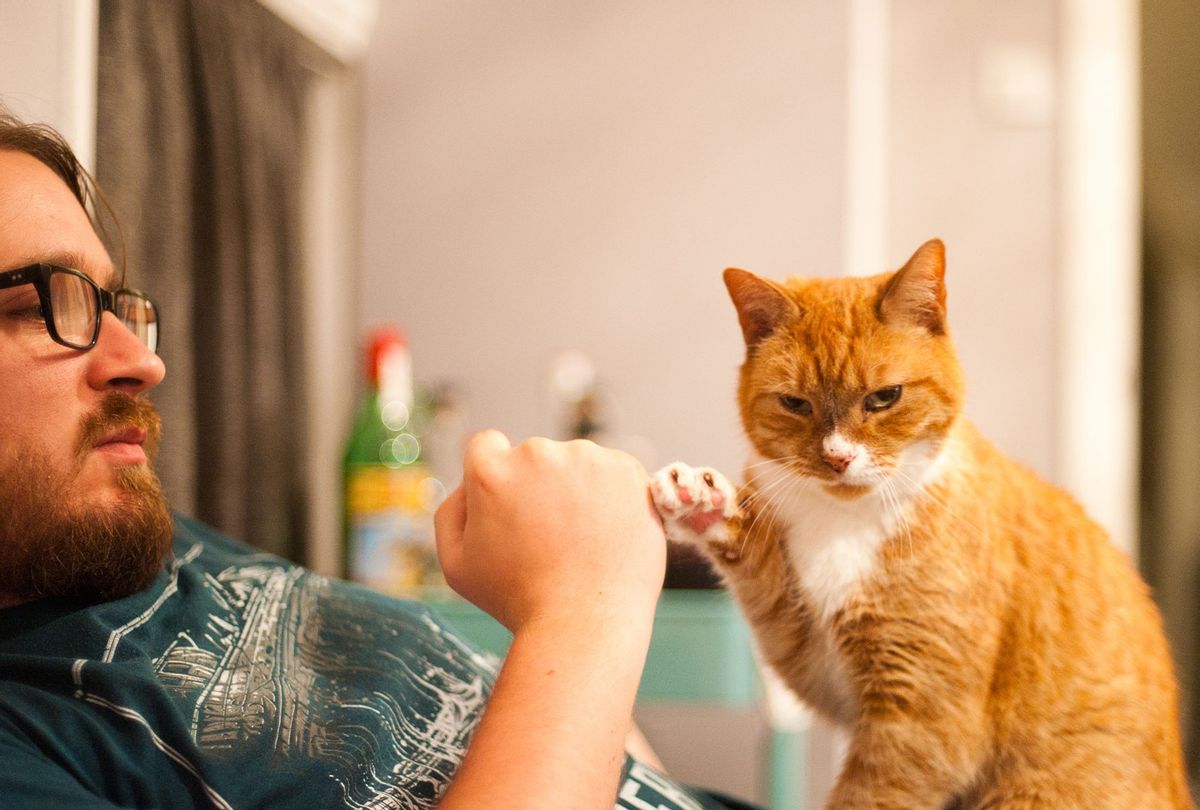 Man and cat do a fist bump (Getty Images)
--

As attested by internet-famous cats like Grumpy Cat and broccoli-hating Smudge, our cultural stereotype of cats is that they are often aggressive, standoffish or, well, grumpy.

Now, a new study suggests that grumpy cat behavior, and particularly those with grumpy-looking faces, may be related to an accident of human breeding. Indeed, as humans bred our pet cats to look cuter and more appealing to their human companions, such facial changes may have affected their ability to communicate with each other.

"Our research suggests that our preferences for looks in animals may go beyond the mere 'cute' to also include animals that exhibit pain-like features on their faces," Lauren R. Finka, a postdoctoral research associate at Nottingham Trent University who co-authored the paper, told Salon by email. In other words, your cats' default cute expression is, to them, perhaps more an expression of pain.

The researchers studied cats of different facial types and concluded that while someone analyzing a cat's face would be able to distinguish between facial expressions indicating "pain" or "no pain" when look at domestic short-haired cats, people could not recognize "pain" expressions in the neutral faces of other breeds, even those with similar facial structures to one another. The scientists also wrote that neutral expressions on the average feline face that is unusually flat and round "suggested greater pain-like features" when compared to those whose faces have medium proportions or are longer than average. For instance, Scottish folds cats had faces that indicated they were in pain even when their expressions were neutral; and several breeds of cats with longer faces, including the Devon Rex cats, also had neutral faces which "indicated a greater absence of pain-like features, compared to the neutral landmarks of various other breeds."

As Finka wrote to Salon, these findings have important implications for people who love their cats and whose cats have faces that seem to indicate they are in pain.

"What this means for our pets is that these animals may end up receiving greater attention from us than they would prefer, because their appearance motivates us to want to attend to them," Finka explained. "Equally, we may also miss when they may actually be in pain, because we may not be able to tell the difference from their usual appearance. It also means that we may continue to prefer – and even encourage – the existence of breeds that often suffer from serious health problems and may struggle to express themselves clearly."

Finka also explained why people tend to gravitate toward animals with features that remind them of children.

"We know that humans tend to find animals with more 'infantile' looking features (e.g a relatively large head and a round face, a high forehead and large, low-lying eyes) cuter and more appealing," Finka explained. These types of cat faces "tap into our instincts to nurture, which is potentially very advantageous for human neonates who are vulnerable and need a lot of care. These features are more pronounced in the flatter faced cats. However they are associated with health problems and breathing difficulties and potentially also limit the ability of these cats to communicate clearly."

In terms of the evolutionary implications, Finka was direct: "When we heavily (artificially) select animals for certain traits that we find appealing, we potentially limit their abilities to clearly express themselves using these features."

In an article about her study for The Conversation, Finka pointed out that the study's implications stretch beyond cats.

"These issues are unlikely to be limited to just cats, given that other domesticated species, particularly dogs, exhibit similar types of selection for extreme features," Finka wrote.

Finka explained to Salon that her paper did not test whether cats are limited in their ability to read each other's pain or might think that other cats are constantly in pain.

"This isn't something that we tested but it's logical to assume that other cats would also struggle to effectively communicate with each other via their faces," Finka wrote to Salon. "However, in general this area has received very little scientific investigation, so we generally don't know much about how cats communicate with each other with their faces. When it comes to the very brachycephalic breeds, It's probably more likely that rather than other cats thinking these cats are in pain, they might just not be able to extract much useful information from their faces at all."