The story of mambo (or mumbo) sauce, the condiment that likely fueled the civil rights movement

In this edition of "Saucy," we dive into the sticky red sauce that launched a multi-state trademark dispute 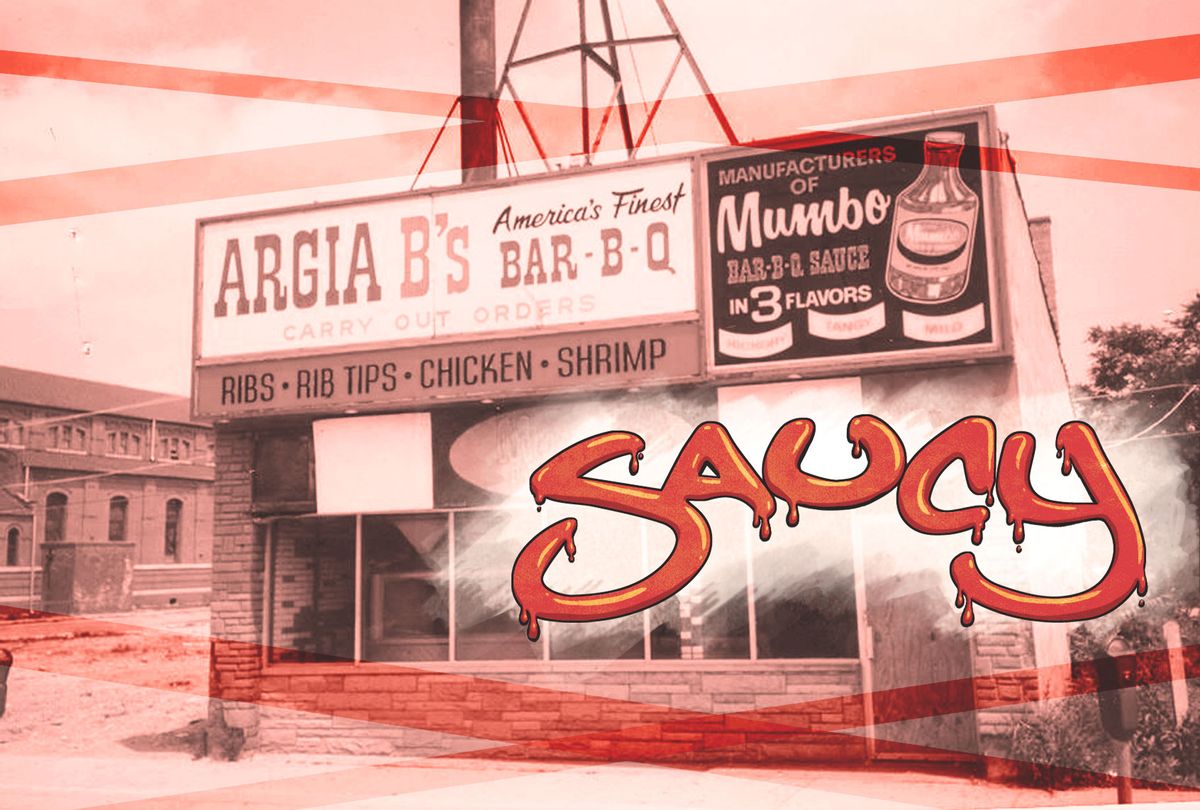 "Saucy" is Salon Food's condiment column. In each edition, we give you the background on a condiment that should be in your pantry and how you could be using it to spice up your meals (often literally). This week, we turn our attention to mambo — or mumbo — sauce.

What is mumbo (or mambo) sauce?

It's a sweet and sticky red-orange sauce that's just a touch tangier and spicier than your typical Kansas-style barbecue sauce. This sauce is typically a mixture of tomato paste, pineapple juice, ginger, soy sauce, vinegar, hot sauce (or cayenne pepper) and a squeeze of citrus.

In 2018, a decades long debate about the origin of mumbo sauce — and who had the right to actually use the word "mumbo" — finally escalated to the courtroom. On one side, there was Select Brands, LLC, a company representing the interests of the late Chicago barbecue restaurant owner Argia B. Collins Sr. On the other, was the Washington, D.C.-based company Capital City Mumbo.

Both claimed their respective cities as the birthplace of mumbo, and underlying the trademark dispute were parallel stories of Black entrepreneurship and the ways in which it impacted a city's culture.

Watching his father manage his own farm made Collins realize that he someday wanted to be his own boss. "He had always wanted to be in business for himself," his wife Susie told the Chicago Tribune after his death in 2003."He always had a desire and drive. He was always searching for new ideas."

That dream came true in the early '50s, when Collins moved to Chicago and opened his first barbecue restaurant, which he managed until his retirement in 1992. It was there where he developed his signature Argia B's Mumbo Bar-B-Que Sauce.

"People kept asking for it in the barbecue house, so he decided he would start bottling it," his daughter Misty recalled.

Mumbo sauce also literally fueled the civil rights movement of the '60s. As the Chicago Tribune reported, Collins often served a young Rev. Jesse Jackson and other organizers of Operation Breadbasket — a predecessor of Operation Push — for free at Argia B's Bar-B-Q. Collins eventually expanded his mumbo empire, while simultaneously spurring the Black business movement. He opened two more restaurants and began supplying area grocery chains, such as Jewel and Dominick's and A&P.

"These products have never been allowed display space before," Rev. Jackson said of Collins' sauce."They were so good, they just began to move to the general market."

After Collins' death, Select Brands — which had been bottling his sauce for decades and filed a trademark for the term "Mumbo Sauce" back in 1958 — continued production.

Washington's claim on mumbo sauce is a little murkier, though just as deeply ingrained. Some claim it was originally served as a dipping sauce at a restaurant called Wings-n-Things in the '60s. It soon became an intrinsic part of the city's nightlife.

"This unique D.C. delicacy is closely related to Go-Go music, a funky regional music style, which blends rhythm, blues and early hip-hop," Capital City Mumbo's website said. "Chicken wings and mumbo sauce can be enjoyed anytime of the day but have always been a favorite late at night after a hard night of partying at the Go-Go."

And that connection between mumbo sauce and Black culture in Washington endures. In 2008, the go-go band Mambo Sauce reached the Billboard hip hop/R&B music charts with their song "Welcome to D.C." Grammy Award-winner Christylez Bacon performs a song about the sauce. To show your allegiance to the city, you can buy a T-shirt that says "Mambo Sauce, Go-Go & Half-Smokes."

The sauce also inspired a new generation of Black entrepreneurs. In 2011, Arsha Jones, a Washington-native founded Capital City Mumbo Sauce. She had grown up with the sauce, getting it from area staples like Jerry's Carry Out. Once she moved to the suburbs, she started making it at home to give her family "a real taste of D.C." It was good enough that she decided to bottle and sell it, which she proceeded to do with the help of her late husband Charles.

Just two months after they launched the business, the couple woke to a Sunday edition of The Washington Post with their faces on the front page — and 1,400 orders overnight.

"We were determined to get every order out, even if it took us two weeks," Arsha told The Washingtonian.

Soon, the company began bringing in about $2 million in annual revenue. Like Argia Collins before it, Capital City Mumbo Sauce got its own version of the sauce on shelves at retail giants like Walmart and Target.

As they started gaining popularity, the company filed a petition to cancel the registered trademark for "Mumbo Sauce" held by Select Brands. They claimed that the term was "so widely used in the D.C. area that it has become generic," but the Trademark Trial and Appeal Board disagreed.

Overnight, the business had to change its name to Capital City Mambo Sauce, and at least on paper, Chicago became the official birthplace of mumbo. Regardless, both companies still bottle and sell their versions of the sauce, and it's ubiquitous at Washington-area Chinese takeout restaurants (because it's perfect for dunking crisp egg rolls — or drizzling over day-old fried rice, trust me).

How should I use mambo sauce at home?

I called up Branden Givand, the creator of Mambo #1, for his suggestions. Last year, Givand had started a Washington-based Latin food pop-up called Pelota, where he served his homemade version of mambo sauce (which updates the typical formula with a little poblano heat and undertones of cinnamon). After the pandemic hit, he started bottling the sauce in order to keep his business afloat. So far, it's been a hit.

Givand says you can use mambo sauce "on just about everything that crosses your face," but he has some favorites:

You can also cook with it. Givand uses it as a marinade for his Mambo Chicken Fajitas.

1. Marinate chicken in Mambo #1 for at least 5 minutes (you can let it marinate overnight for a deeper flavor), then season with half of the lemon juice, salt, pepper and paprika.

2. Julienne pepper and onion. Season with salt, pepper and 1 tablespoon of olive oil.

3. Grill chicken 2 to 3 minutes on each side on high heat. Remove from the grill, and let it rest.

4. Cook chopped green peppers, onions and garlic in a preheated cast iron skillet with 1 tablespoon of extra virgin olive oil for 5 minutes on high heat. Remove from cast iron, and set to the side.

5. Slice the chicken and add to the skillet, and sauté on high heat for 3 minutes. Add 3 tablespoons of water to the skillet. Cover with a lid, allowing the chicken to steam until fully cooked, 2 to 4 minutes.

6. Add the vegetables back to the skillet. Squeeze the remaining lemon juice on the chicken, and pour an additional 3 tablespoons of water into the skillet. Cover the skillet, and cook for 3 to 5 minutes. Then reduce the heat.

7. Meanwhile, brush the ancho chili and jalapeño peppers with olive oil. Place them on the grill over high heat until charred, 1 minute each side. Slice, and place on the chicken, followed by the shredded Mexican cheese. Cover the skillet until the cheese is fully melted, about 1 minute.

8. Drizzle with Mambo #1, followed by the cotija cheese and freshly-chopped cilantro.

9. Rub corn tortilla shells with olive oil, sea salt and ground pepper. Place on a warm grill or in another hot pan. Cook until the edges get a little brown and the center starts to bubble a bit. Don't over cook, about 30 seconds per side. Set aside.

10. Put the halved lemons and limes directly on the grill, for 1 to 2 mins on high heat until charred. Place the charred citrus on a platter next to the tortillas. Serve these alongside the skillet with the chicken and vegetables, as well sour cream and guacamole to taste.

I've also tried my hand at making it at home, and here's a version you can make in your own kitchen that will get the job done:

1. Combine all ingredients in a medium saucepan, and bring to a gentle simmer, stirring occasionally with a whisk for about 20 minutes. The sauce will thicken and should be very smooth. Remove from the heat, and allow the sauce to cool slightly.

2. You can serve it on the spot, or place it in an airtight container and store it in your refrigerator — it will keep up to 2 months — until the next time your leftovers need a little pick-me-up.