Trump's toxic dualities: A nation where Starbucks and Dunkin' fans hate each other

Trump has thrived on simplistic, binary divisions. They're deeply rooted in human nature, but we can overcome them 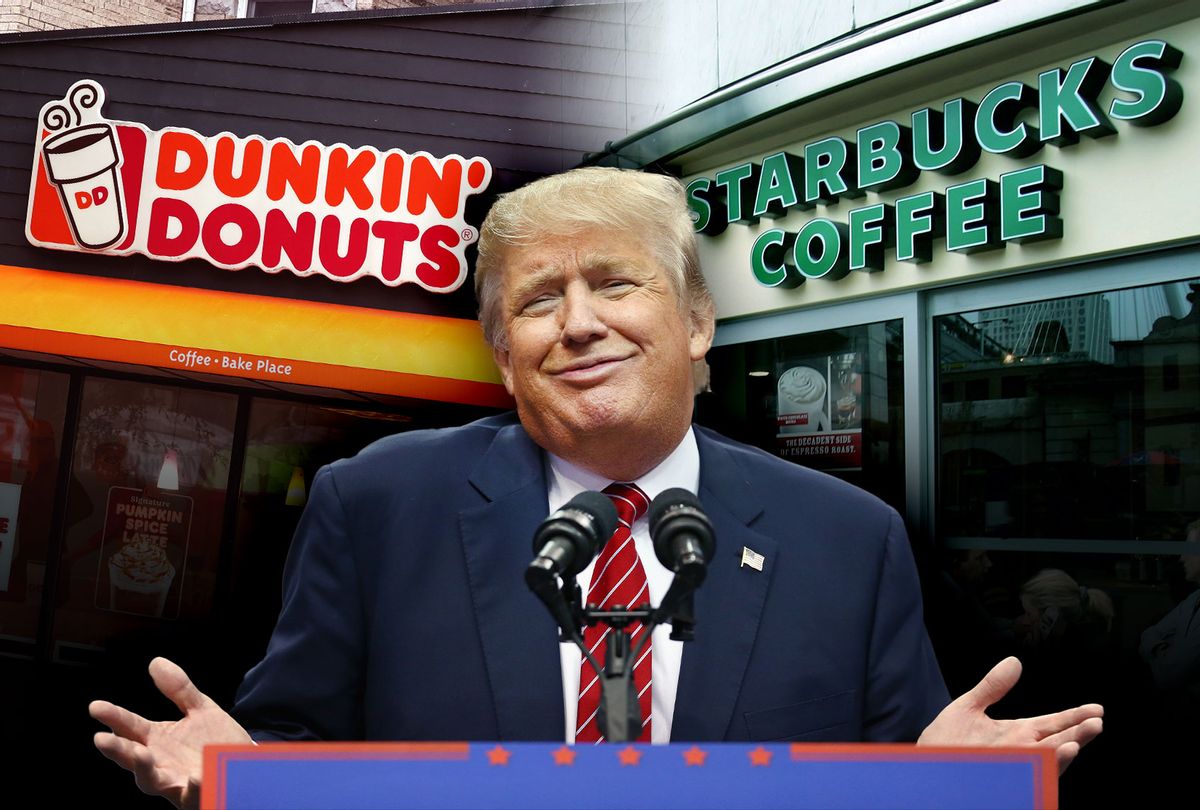 How did it happen that a riotous group of domestic terrorists, incited by Donald Trump, attacked the central place where American democracy does its business?

The process started as soon as Trump announced his first run for the presidency. His agitations then shifted into higher gear when, like a bat out of hell, blue and red became as far away on the color spectrum as any two colors can be. That's the nature of Trump: he drives everything into opposite extremes. He's a virus that infects minds into believing dualities — if you're not for me, you're my enemy.

Masking became a political symbol and with the aid of America's denier-in-chief and some of his supporters, COVID-19 caused ICUs to fill-up, restaurant workers to lose jobs and gravediggers to work overtime. But this is how the nature of belief works. Facts are puny in the face of belief. That's the nature of mind. There are more connections going up to the frontal lobes from the limbic system, the emotional center of the brain, than the other way around. Trump poured accelerant on an all-too natural, dormant but smoldering inclination of mind.

The mind of Trump and his loyal legions

Trump supporters are largely made up of three groups of people: people who just want to hit out at the world, people whose only concern is their wealth, and people who feel they have been marginalized by the traditional powers that be — and perceive Trump as poking a finger in the eyes of those who have slighted them. This last group — mostly folks from more rural areas who are blue collar and don't have college degrees — experiences Main Street and Wall Street as opposite seats of a seesaw: One side's up and theirs is down … for far too long.

Income inequality is a heavy burden to bear when you're the one worrying about where your next meal or paycheck is coming from. And fear can plays havoc with one's cognitive capabilities. Fear limits one's vision to "now," and feelings of humiliation have no half-life, as we know from places such as Kosovo. We all are sometimes prone to what cognitive science calls "confirmation bias" — that is, accepting information or twisting input so it coincides with one's own already established beliefs. The idiom that "seeing is believing" is not quite true. It would be more precise to say "believing is seeing." It's typical that this "blinder" mentality is increased when a person is under stress.

Trump is full of rage and likes to hate. As such, he instinctively tapped into an undercurrent of resentment in a big part of the U.S. population. But something that is not often addressed in understanding the Trump interval is that it's easy — too easy — for us humans to cast "the other" as part of a hateful lot. We can quickly go from seeing a "stranger" to "I really don't like you," with the speed of a symbolic association made by the mind. It takes little time and effort.

Emotion and symbolic connections — not literal, objective or rational ones — rule the cognitive roost. What we believe is largely a matter of temperament, worldview, biology and biography. And therein lies the rest of the story, which is as old as our species. To describe how easy it is for hate to take hold in a mind we can turn from the importance of presidential politics and look at a more mundane context: how Dunkin' Donuts loyalists and Starbucks loyalists make each other into "its" and not "thous."

Even Starbucks and Dunkin' loyalists can hate each other

I am a cognitive anthropologist, and I study how people "make meaning." I've cast a primal eye on politics, business, health care, technology and on how everyday products are marketed. I've studied primitive, warlike tribes in Amazonia, street gangs in New York and Rio de Janeiro and schoolyard fights in America and Britain. I've studied how a person can think his or her God is supreme and all others are a fraud. The same goes for people who like Coke but not Pepsi, or vice versa.

A decade ago I undertook a project to better understand peoples' experience of the morning. I've always been interested in beginnings and endings; they tell you a lot about the middle. So I decided to look at how people relate to their morning coffee. During a two-week period, I paid Starbucks lovers and Dunkin' Donuts lovers to only go for morning coffee to the brand store (or that store-bought brand they have at home) that they usually do not choose. In return I asked them to write me a daily diary about what they felt about their temporary brand switch. After the two-week period, I asked them to come in to be interviewed by me, sometimes individually and sometimes in groups of people who loved one brand or the other.

I soon realized that what had started out as something like an applied marketing project turned out to be a study in tribalism. Looking back on that work now, it seems to reflect a similar dynamic that we have seen recently on the airwaves and in the streets of America — the clash between MAGA caps and those who look at them and shake their heads in disbelief.

Tribes can be defined by differences of membership displays of dress, language and rituals, and also by more abstract things such as time perception and narrative tropes. Each tribe has different beliefs about self and about how the world works. It turns out that Dunkin' Donuts lovers and Starbucks lovers exhibit such differences, and as all tribes have a tendency to do, they exaggerate differences by painting the out-group as "bad."

Dunkin' lovers seem overly annoyed by Starbucks lovers calling a small cup of coffee a "tall," and describing skim milk with the term "nonfat." Dunkin' loyalists commonly relate to Starbucks lovers as "those pretentious and pedantic jerks." Each group complains about the other brand's store design — "Starbucks lighting is too bright. I don't want to linger, I just want my regular cup of Dunkin' not-too-strong coffee and then to get on with my morning." Dunkin' drinkers often repeat the mantra, "It's coffee, it's not rocket science." In contrast, people who like the Starbucks brew complain about Dunkin' stores being "too bland and too dull, just like its coffee." Another big difference between the two tribes is their subjective perception of time. Dunkin' loyalists seemed to be in a rush, while Starbucks-goers like to linger in the store, focus on the sensual experience — taste, color, aroma — of their coffee, and want to it match their mood. One morning they may want a double latte caramel frappuccino and the next, a grande macchiato. Starbucks loyalists want things personalized. Dunkin' loyalists see that as "obnoxious."

The most startling observation I made after talking to these respondents and reviewing the videotape of the sessions was how very quickly both tribes segued from talking about the products to talking about who is good and who is bad. Talk about coffee blurred into talk about what I came to call "identity struggles." Each group came to conceive of the other as a kind of pseudo-species. I've seen a similar process take hold in both in family therapy sessions and diplomatic negotiations between American and foreign diplomats.

Dualities make complexity inadmissible, so everything becomes an absolute: Black versus white, red versus blue, right versus wrong, Dunkin' versus Starbucks. We can do that with products, people and ideas. In the process, nuance, paradox and irony get sucked out of reality, and the insight that every one of us is both fierce and fragile, defiant and delicate, is abandoned. Few want to hear Walt Whitman's lines: "Do I contradict myself? Very well, then I contradict myself, I am large, I contain multitudes."

Donald Trump's world is made up only of dualities: If you're not for me, I hate you, you're my enemy. Trump's supporters perceive this as an expression of his toughness. They like that in him. It makes them feel. They find Trump's anger soothing. It confirms their own state of being. They don't know of hope as a dimension of the soul, an orientation of the heart. They can't see possibility over the horizon. So eventually the storm the gates of the U.S. Capitol.

A strange but valid way to think about viruses is that adapting to the threat of a virus — even a killer virus — makes nature stronger, better, more evolved. Trump is a deadly virus, but one that can leave us stronger once he no longer occupies the White House. For this to happen, however, certain other changes in how politics operates must change, too.

For too long, the paradigms of politics and political negotiation have avoided the basic unit of human affairs: emotion. This must change if we are to address the new challenges that modernity has put before us. Humans as humans — with all the complexity and paradox engendered by human nature and the nature of mind — must be brought into the lexicon of geopolitics as well as domestic politics.  Only then can the emotional logic of humiliation and hate enter the calculus of human affairs in a way that opens the possibility of hope.

There was a glimpse of this when former Sen. George Mitchell helped to lead a peace process that culminated in the Good Friday Agreement of 1998 that brought an end to decades of conflict between Catholics and Protestants in Northern Ireland. The U.S. has engaged in peace processes with all manner of hostile foreign actors. Why not create one now focusing on ameliorating our own, current civil war? Sure, that might sound naive — but why not try?

This time, though, do it in a way that faces up to the fact that an immense capacity for patience, commitment and courage is required to go beyond the stale and stifling blame-game language of dueling political tribes. It will take a new poetics of political discourse that utters what's not expected to be said. Surprise is the only thing that stands a chance of opening up and recalibrating one's familiar. We need not walk on new ground. Others have shown us examples: Vaclav Havel, Mikhail Gorbachev, Nelson Mandela, Martin Luther King Jr. Joe Biden has big challenges ahead: the pandemic, the economy, racial injustice. No less important in the long run is changing the American context of duality: elites versus "deplorables," haves versus have-nots, rural versus urban, blue collar versus white collar. Abraham Lincoln's work, although great, is yet unfinished. The time is right to see it through.

Bob Deutsch holds a Ph.D. in cognitive neuroscience. He has studied chimpanzees while supported by the New York Zoological Society and taught anthropology at the City University of New York. Before spending a decade as a State Department analyst, he studied preliterate tribes in Irian Jaya and Amazonia. He has written for the Chicago Tribune, the Atlanta Journal-Constitution, HuffPost and Forbes, and has appeared on ABC's "Good Morning America" and PBS' "Rights & Wrongs."