"Year of reckless executions" continues; activists say there's "no sense, fairness or humanity to this punishment" 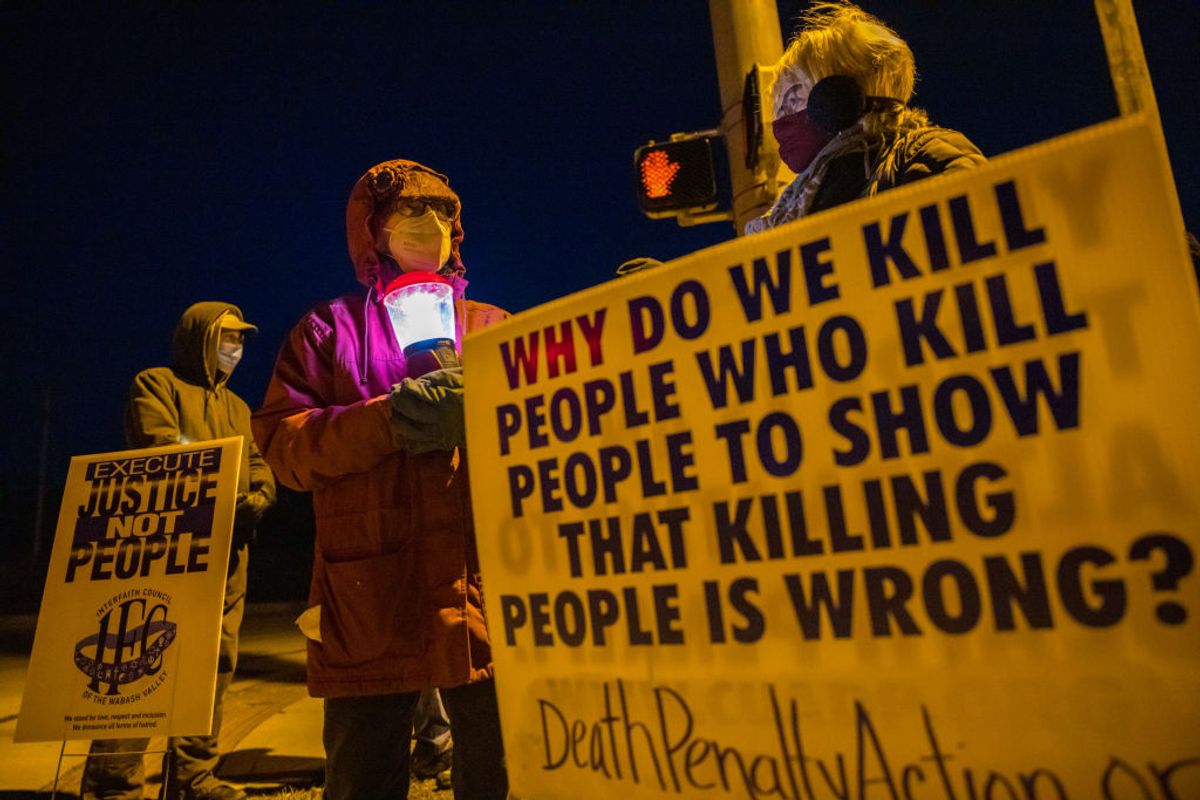 Indiana anti-death-penalty activist Glenda Breeden holds a lamp while protesting against the execution of Lisa Montgomery and two others, which are scheduled at Terre Haute Federal Prison this week. (Jeremy Hogan/SOPA Images/LightRocket via Getty Images)
--

Human rights defenders issued fresh calls for the U.S. to end the death penalty after the Trump administration last Thursday evening — the eve of Martin Luther King Jr.'s birthday — executed Corey Johnson, the 12th person the federal government has killed in the last six months. The administration has another execution scheduled for Friday.

"Despite [his] intellectual disability and having recently had COVID-19, SCOTUS denied his appeal," Amnesty USA tweeted late Thursday after the execution of Johnson, who was Black. "There is no reform to bring sense, fairness, or humanity to this punishment."

Johnson was pronounced dead at 11:34 p.m. Eastern time after a lethal injection at a federal facility in Terre Haute, Indiana.

Johnson was sentenced to die after he was convicted of killing seven people in 1992 as a part of the drug trade in Virginia. The weeks preceding his execution were defined by a tense legal battle after he contracted Covid-19 while on death row.

"I am not the same man that I was," Johnson said in his final statement.

In their clemency petition, Johnson's lawyers asked President Donald Trump to commute his death sentence to life in prison. They described a traumatic childhood in which he was physically abused by his drug-addicted mother and her boyfriends, abandoned at age 13, then shuffled between residential and institutional facilities until he aged out of the foster care system. They cited numerous childhood IQ tests discovered after he was sentenced that place him in the mentally disabled category and say testing during his time in prison shows he can read and write at only an elementary school level.

In a dissenting opinion from the U.S. Court of Appeals for the Fourth Circuit's decision declining to reconsider a ruling refusing to grant Johnson an evidentiary hearing, Judge James A. Wynn wrote,  "If Johnson's death sentence is carried out today, the United States will execute an intellectually disabled person, which is unconstitutional."

The ACLU, meanwhile, warned that Johnson's execution would mark "another needless death in a year of reckless executions amidst a pandemic."

"The system is broken beyond repair," the group said in a Thursday tweet ahead of the lethal injection. "End the death penalty."

The Trump administration sparked outrage in 2019 when it announced its plan to resume federal executions and carry out what Democratic lawmakers criticized as a "frenzied and unprecedented" killing spree before President-elect Joe Biden, who has said he will work to end the federal death penalty, takes office.

ProPublica reported last week that Trump's Justice Department has argued that rescheduling the executions would be more harmful to the government than to the people set to die.

In their determination to kill Nos. 11, 12 and 13 — capping an unprecedented string of federal executions after a 17-year hiatus — Justice Department officials scheduled executions in defiance of court orders, flouted pandemic safety measures and lied about it, and demanded that judges yield to the administration's self-imposed deadline of Jan. 20.

Their filings don't explicitly acknowledge what everybody knows: They're running out of time to execute people before the inauguration of Joe Biden, who opposes the death penalty.

Instead, their legal rationale for why they cannot wait appears to rest in part on the availability of the private contractors whom the government hired to carry out the executions. Justice Department lawyers argued in court in the past several weeks that the inconvenience of rescheduling these private contractors would "irreparably harm" the government more than the prisoners would be irreparably harmed by dying.

The White House, the Justice Department and the Bureau of Prisons did not respond to requests for comment.

"By resuming the cruelest and most irreversible of punishments, the federal government is dramatically and disgracefully out of step with the general momentum," Goodfellow said in a statement earlier this month.  "Around the world countries are increasingly moving away from the death penalty. In the United States 22 states have abolished the death penalty, while in all 50 states people are fighting tirelessly to end the inhumane practice."

This week's crescendo of calls to end the death penalty includes the voices of Martin Luther King Jr.'s children.

"President Trump and his Justice Department, in their unprecedented barrage of executions, have disregarded all of the principles of humanity, decency, and justice that my father preached," Martin Luther King III wrote in an op-ed published Thursday at the Washington Post.

"To cap off its killing spree, the Trump administration had planned two more executions: On Thursday, it would execute another young Black man, Cory Johnson, convicted of multiple gang-related murders whose intellectual disability should preclude his execution. And on Friday, it would execute Dustin Higgs, another young Black man convicted for his involvement in the murder of three women, though he didn't personally kill anyone," he wrote.

"Friday would have been my father's 92nd birthday," wrote King. "Nothing could dishonor his legacy more profoundly than if these executions go forward."