Climate change is no longer abstract: everyday people say they have seen ecosystems decay in their communities 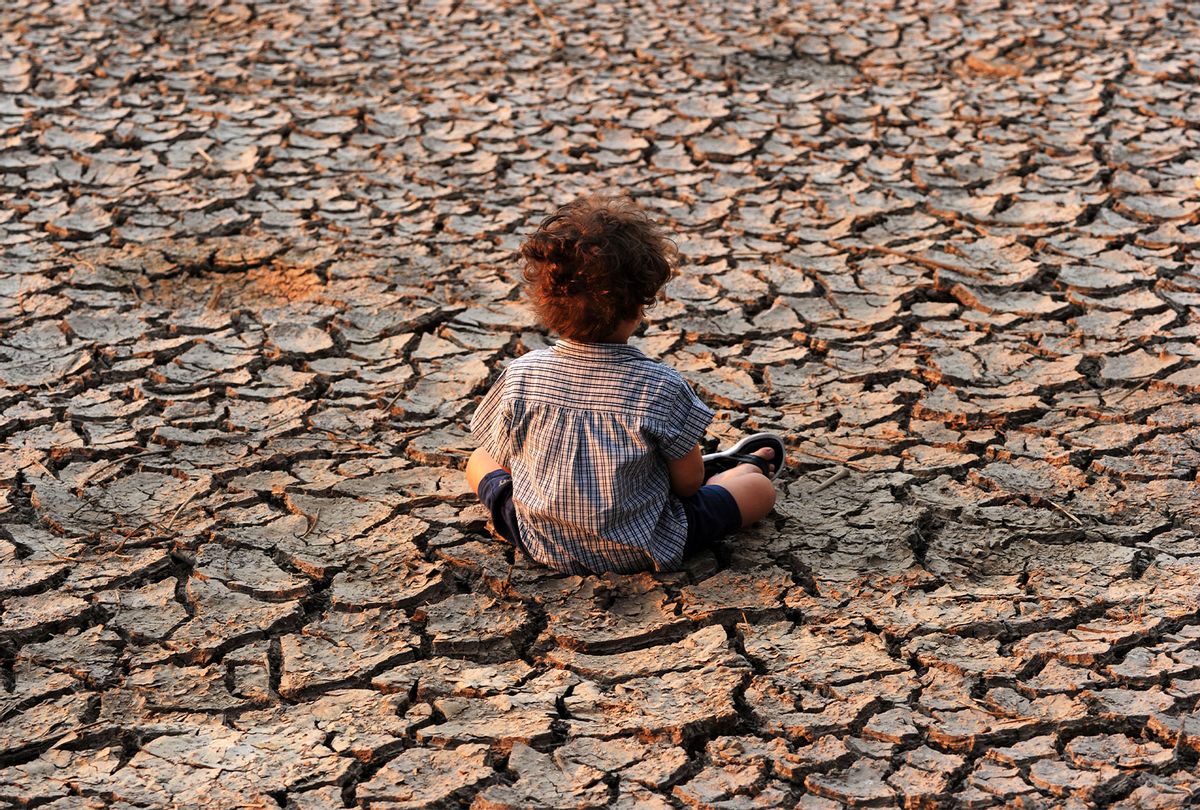 A child remains at an area affected by a drought on Earth Day in the southern outskirts of Tegucigalpa on April 22, 2016. (ORLANDO SIERRA/AFP via Getty Images)
--

Diane Vukovic loves newts, and is devastated that they are dying off.

The owner and author of the blog Mom Goes Camping told Salon by email that she spends a lot of time in nature, backpacking and camping, and particularly enjoys a glacier lake in the mountains of Kosovo perched 6,500 feet above sea level.

"The lake used to be full of newts as well as cool water beetles and other animals," Vukovic reports. "You've got to understand that newts are very sensitive to pollution, so seeing newts in the wild is always a thrill: I know I've found an unspoiled place in nature. But, over the past few years, I started seeing fewer and fewer newts on our trips to the lake."

Vukovic cannot prove definitively that their population decline is due to global warming, but there is plenty of evidence that global warming is hurting newt and salamander communities. She suspects that is the cause.

"Warmer winters mean less snow melt to keep glacial lakes filled," Vukovic explained. "Higher temperatures dry up the mountain lakes even further, leaving the newts with nowhere to live. Newts, as well as other amphibians, are very sensitive to temperature changes. So, even if the lake doesn't dry up completely, the animals still might not be able to survive."

She added, mournfully, "It's depressing knowing that one day I might return to the lake and find it — and all the life it held — completely gone."

Climate change is often positioned as a vast, abstract, hard-to-fathom phenomena, something that the everyday person struggles to comprehend directly. Yet nature-lovers around the globe are seeing it manifest in their everyday lives, in parks, rivers and wildlife. And their stories are as tragic as they are alarming.

They come from all walks of life. Wesley Wheeler is a professional exterminator and self-described "nature-lover." Wheeler has observed how our winters have become more mild, which is leading to a higher tick population and therefore more "truly nasty diseases" like Lyme Disease.

"Sustained cold is a major natural force that kills ticks and their eggs over the winter," Wheeler wrote to Salon. "We're getting fewer cold days, so more and more ticks are surviving and spreading disease across the northern US." He recalled how, while on a hike in December, he found a tick attached to himself and was prescribed a dose of antibiotics that doctors hope will prevent Lyme Disease.

Wilderness Guide Steve Silberberg, who runs a business called Fitpacking, recalled to Salon in an email that he has regularly hiked through the Rocky Mountain National Park and noticed a troubling increase in the number of dead trees.

"Years ago, there were hardly any dead trees in Rocky Mountain National Park," Silberberg explained. "By the time I started taking backpacking groups there in 2011 and 2012, you could see that maybe a quarter or even a third of the trees were dead and dying from the pine beetle infestation. The infestation is a result of warmer temperatures which allow these beetles two life cycles in a season instead of one. The beetles bore into the trees and ultimately kill them."

He noted that the same phenomenon is occurring in the Black Hills of South Dakota, located near Mt. Rushmore, where "lots of pine beetles and dead trees. . . it's only a matter of time before wildfire will strike." Silberberg also talked about how the Troublesome Fire of 2020 "devastated" the tree population in the park.

Leif Cocks, founder of the conservation group The Orangutan Project, has first-hand experience observing how primates have suffered from climate change. As rainforests shrink in size, they are unable to generate as much rain, creating a toxic feedback loop in which rivers run dry, droughts become more common and local temperatures in the deforested areas of Indonesia spike beyond even the global averages.

"This means orangutans are not only dying from the destruction of their habitat, but their remaining rainforest is less productive," Cocks explained. "Droughts mean the forest produces less fruit. In addition, the dry forest is more susceptible to increasing fires. This not only kills the orangutans directly, but causes the surviving orangutans to starve, as the fire destroys the fruit and the flowers of the already stressed forest system."

He added that "unsustainable palm oil plantations and other monocultures that replace the rainforest are always planted in the lowland and riverine landscapes, leaving struggling wildlife to survive in remnant, least productive, highland forests."

Cocks and his rescue teams have witnessed the horrific consequences. Cocks says they have observed "many burnt and starving orangutans . . . Skeletons with their babies hanging off their malnourished, dying frames. . . Desperate orangutans try to steal crops from community gardens or the unsustainable palm oil plantations that have replaced their rainforests, and are then seen as agricultural pests, and that's when the real horror starts — they are macheted to death, petrol poured on them and set alight, or eyes shot out by pellet guns."

"Sometimes rescue teams can save the babies, although they often have horrific physical and physiological injuries, which will remain for life," Cocks added. "The road to extinction of these highly intelligent self-aware persons, now exacerbated by climate change, is a series of individual stories of horror beyond the average person's imagination."

There are economic consequences to climate change as well, some of which are manifesting already. Landon Yoder, an assistant professor at Indiana University's O'Neill School of Public and Environmental Affairs, wrote to Salon about how the farmers he has interviewed are "on the front lines in dealing with climate change. Most of them have noticed that rainfall patterns have changed and that when it rains it's more intense and less consistent." To cope with this problem, he found that a lot of farmers are using cover crops, or a non-commercial crop that they plant after they're done harvesting so that the soil will remain in place over the winter.

"Several colleagues and I went out and interviewed 30 farmers last year in southern Indiana, where there is already above-average use of cover crops, to see whether climate changes were driving the use of the practice," Yoder explained. "We found that some farmers are using cover crops to deal with the intense rainfall, but that the learning process for cover crops is still challenging and that the additional spring rainfall from climate change in some cases has also discouraged some farmers from using cover crops because the additional moisture they retained delayed when they could terminate the cover crop and get into their fields to plant their cash crop." Although farmers may be able to manage their problem with more experience, "it's just one example where climate change is making it more complicated to farm and in some cases that can discourage farmers from continuing to use or expand cover crops."

Finally there are the stories that have been experienced by literally millions of people, such as the wildfires that engulfed millions of acres in the west last year. For residents in those areas of California, Oregon and Washington, they had to watch in horror as the sky turned orange, the air filled with smoke and the wilderness around them was literally burnt to a crisp. That was only last year; climate change has led to an increase in wildfires in the American west for years now, even though wildfires used to be a once-in-a-lifetime occurrence.

"I remember waking up to a smoke-filled apartment as I had left the window open in my bedroom at night, and suddenly realizing what the deep red sky I noticed at sunset the night before had really meant – it was caused by the smoke particles in the atmosphere that hadn't yet reached me but were on the way," Ryan Sullivan, associate professor of chemistry and mechanical engineering at Carnegie Mellon University's College of Engineering, wrote to Salon about his experience in the first month of his PhD program in chemistry at the University of California — San Diego. A large wildfire had broken out in the San Diego area.

"This was especially traumatic in my first year of graduate school," Sullivan recalled. "I was living in off-campus housing about a mile from campus in a very suburban area. I had no car, but my roommate did. Campus and most businesses closed for two weeks." He remembered how his apartment was filled with smoke for two weeks despite the windows being closed and the kitchen range vent remaining on.

Coty Jen, assistant professor at the Department of Chemical Engineering and Center for Atmospheric Particle Studies at Carnegie Mellon University's College of Engineering, told Salon that she remembered the northern California wildfires of October/November 2017 while she lived in Berkeley, California, which she described as "a pretty surreal experience." She recalled driving to the University of California — Berkeley's campus and thinking it was hazy without realizing at first that it was due to the wildfires.

"Everywhere smelled like smoke and it continued for days," she recalled. "Since I was researching wildfire smoke and how it impacts air pollution, I started collecting measurements of the smoke from our lab. We normally have to travel to sites to do outdoor measurements so it was really strange to just stick a sampling tube out the window of our lab to sample some smoke." She reflected that "now major wildfires are happening every one to two years instead of once a lifetime."